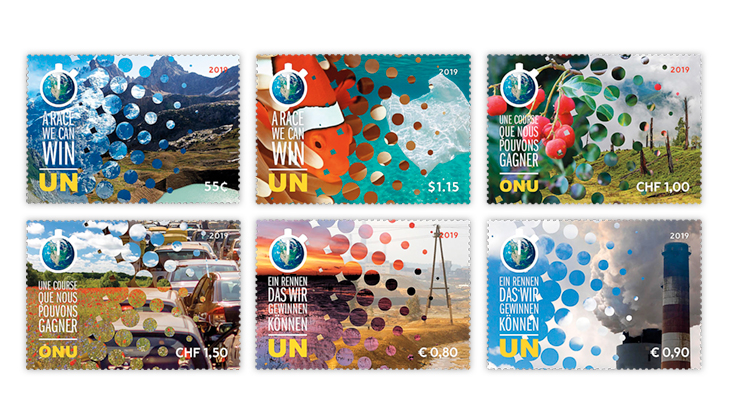 The United Nations Postal Administration is issuing these six stamps Sept. 23 to support the 2019 Climate Action Summit in New York City. The stamp designer describes the images on the stamps as illustrating the “dire effects of greenhouse gases and of man’s encroachment on the natural world.” 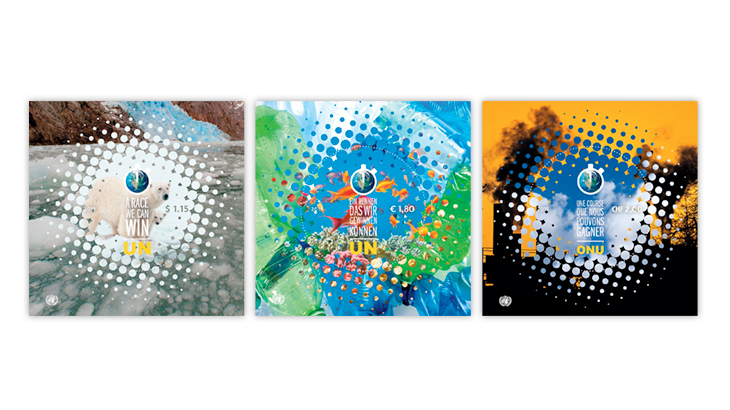 U.N. Secretary-General Antonio Guterres convened the summit “to meet the urgent need to address climate change and achieve the goals of the Paris Agreement,” according to the summit’s website.

The rectangular stamps are denominated 55¢ and $1.15 for use from the post office at U.N. headquarters in New York City; 1 franc and 1.50fr for use from the Palais des Nations in Geneva, Switzerland; and 0.80 and 0.90 for use from the Vienna International Center in Vienna, Austria.

Sergio Baradat of the United Nations, who designed the stamps, said: “Climate change is the most existential threat the world now faces.

“The inspiration was to try and illustrate the concept of elapsed time.

“The before and after photos clearly illustrate the dire effects of greenhouse gases and of man’s encroachment on the natural world.”

Each stamp design depicts a symbolic stopwatch showing Earth and also includes the slogan “A Race We Can Win.”

Fauna and flora can be seen in some of the stamp designs.

For example, the round $1.15 stamp features a polar bear, while the rectangular stamp with the same denomination shows a fish. Fish are featured along with coral on the 1.80 stamp; the selvage of the souvenir sheet shows plastic bottles.

The 1fr stamp includes images of berries and dead trees. The design of the 1.50fr stamp pairs a photo of a field of wildflowers with a photo of bumper-to-bumper cars.

Smokestacks figure prominently in the designs of the 0.90 stamp and the 2fr souvenir sheet, and they also are visible in the background of the 0.80 stamp.

The remaining stamp, 55¢, shows scenes of a mountain lake and a glacier.

In the press release announcing the stamps, the UNPA said: “The impacts of climate change are being felt everywhere and are having very real consequences on people’s lives. We must change course by 2020, the UN Secretary-General has said, or we risk missing the point where we can avoid the ‘disastrous consequences for people and all the natural systems that sustain us.’”