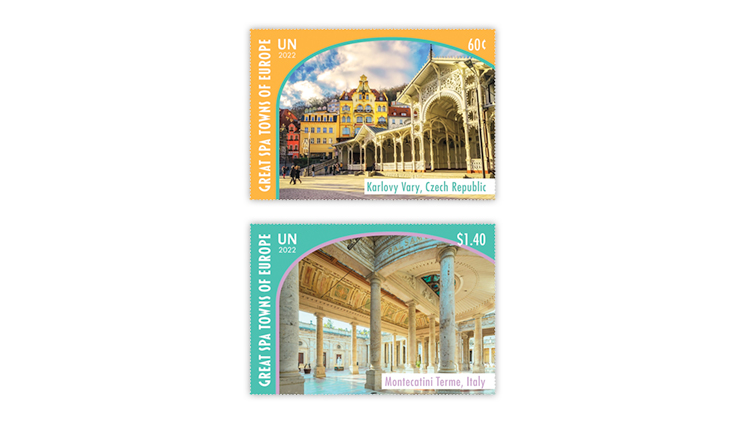 The United Nations Postal Administration will issue new stamps in its World Heritage series Sept. 9. The set showcases the Great Spa Towns of Europe, a multination World Heritage site. The two stamps for use from the U.N. headquarters in New York City fea

The United Nations Postal Administration will highlight the Great Spa Towns of Europe World Heritage site on stamps to be issued Sept. 9.

This new set includes six stamps and three prestige booklets that contain text and illustrations in addition to stamps.

There will be two stamps and one prestige booklet for each of the three U.N. post offices.

With its World Heritage list, UNESCO says it “seeks to encourage the identification, protection and preservation of cultural and natural heritage around the world considered to be of outstanding value to humanity. This is embodied in an international treaty called the Convention concerning the Protection of the World Cultural and Natural Heritage, adopted by UNESCO in 1972.”

Eleven spa towns in seven countries make up the Great Spa Towns of Europe site, which was added to the World Heritage List in 2021.

The towns, UNESCO said, all developed around natural mineral water springs, and they bear witness to the international European spa culture that led to international resorts.

These resorts not only included spa buildings such as baths and drinking halls, but also related facilities such as casinos, theaters and hotels.

“These ensembles are all integrated into an overall urban context that includes a carefully managed recreational and therapeutic environment in a picturesque landscape,” UNESCO said. “Together, these sites embody the significant interchange of human values and developments in medicine, science and balneology.”

According to the Balneology Association of North America, “Balneology is the study of the arts, sciences and cultures of natural mineral waters for drinking, soaking baths, steams and inhalations for health, wellness and therapeutic benefits.”

Each stamp in the Sept. 9 set features a photograph from one of six different spa towns, with the location name in the lower right corner and the denomination in the top right. An arched border runs along the top and left side of each stamp with the phrase “Great Spa Towns of Europe” in either English, French or German on the left.

The 60¢ stamp issued for the post office at U.N. headquarters in New York City depicts Karlovy Vary in the Czech Republic, located about 80 miles west of Prague near the German border.

Known as “the largest open-air salon of Europe,” according to the Great Spa Towns of Europe, Karlovy Vary has hosted royal families, heads of state, aristocracy and prominent artists.

The Great Spa Towns of Europe said the town is distinguished by a geyser-like spring and an architectural spa ensemble, which includes numerous colonnades where thousands of daily visitors drink from porcelain spa cups.

The $1.40 stamp for the U.N. New York post office features Montecatini Terme in Italy. Located in Tuscany about 30 miles from Florence, Montecatini Terme has attracted important intellectuals and artists, including Giuseppe Verdi, Giacomo Puccini and Ruggero Leoncavallo, according to the Great Spa Towns of Europe website.

The town’s monumental spa architecture centers around four main springs dotted along gardens, parkland and promenades, according to the website. This greenery continues through pine trees and olive groves that ascend steep slopes leading to the medieval town of Montecatini Alto.

To read the rest of this article, subscribe to Linn’s Stamp News.