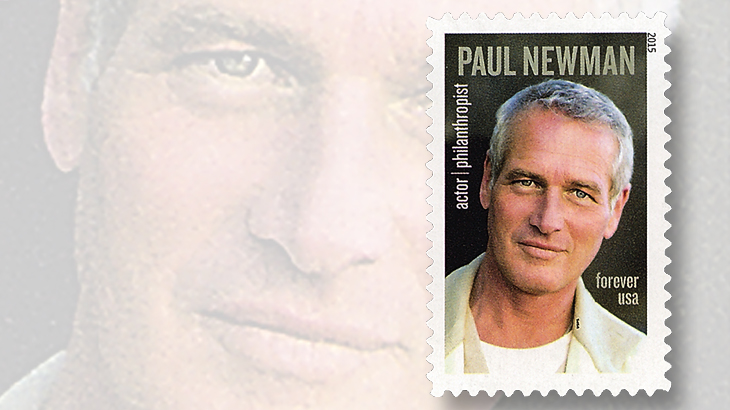 On Sept. 18, 2015, the U.S. Postal Service issued a nondenominated (49¢) Paul Newman stamp (Scott 5020) in panes of 20. Although the Academy Award-winning actor/director was best known for his on-screen performances, the stamp, which is inscribed “Actor/Philanthropist,” is not part of the Legends of Hollywood series.

He served in the U.S. Navy as a turret gunner in a TBF Avenger dive bomber in World War II. Married twice, he was the father of six children. His second wife, Joanne Woodward, to whom he was married for more than 50 years, is also a distinguished actress.

In addition to his screen accomplishments, Newman was a professional race car driver and liberal activist. In 1982, he founded the Newman’s Own line of food products, which are still found on grocery store shelves today. All profits from the company, more than $400 million to date, are donated to charity. Newman died of lung cancer in 2008.

The Paul Newman pane of 20 remains on sale but is sold out at Stamp Fulfillment Services in Kansas City. Check your local post offices for remaining stocks. We think it is a good buy at face value.