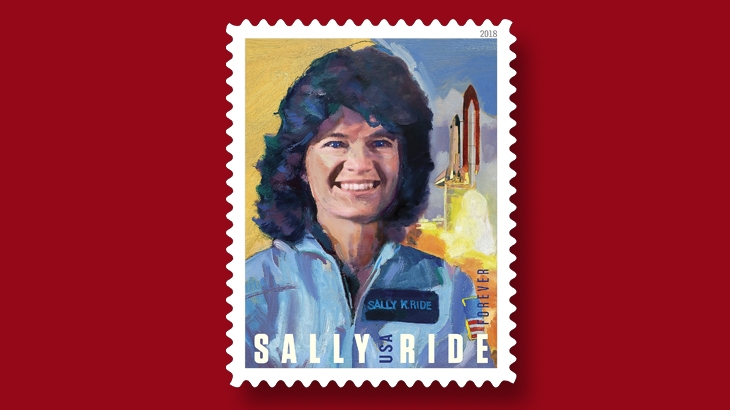 The Sally Ride forever commemorative stamp will be issued May 23 in La Jolla, Calif. The Postal Service revealed issue dates for the Sally Ride stamp and four others on Feb. 28.

The United States Postal Service has announced a new stamp for United States Airmail that will be issued May 1 in Washington, D.C. It is one of five U.S. stamp issues assigned issue dates and locations for the second quarter of 2018. The other four stamps are previously announced issues.

The United States Airmail stamp presumably commemorates the centennial of airmail service in the United States. No additional details were available from the USPS, but spokesman Mark Saunders confirmed to Linn’s Stamp News that the issue is not a global forever stamp.

It is unknown if the issue consists of a single stamp or multiple stamps.

The Postal Service will issue its four-stamp set celebrating STEM education on April 6 in Washington, D.C.

The nondenominated (50¢) forever stamps will be issued in a pane of 20.

Each stamp characterizes one of the four disciplines represented by the STEM acronym: Science, Technology, Engineering and Math.

The remaining three issues are the Peace Rose forever stamp, to be issued April 21 in Shreveport, La.; the Sally Ride commemorative to be issued May 23 in La Jolla, Calif.; and the Flag Act of 1818 stamp to be issued June 9 in Appleton, Wis.

Details of first-day ceremonies were not revealed in the Feb. 28 announcement.

Appleton is the site of the annual Appleton Flag Day Parade, which is taking place this year on June 9. The event is recognized as the oldest Flag Day parade in the nation, according to Appleton Downtown Inc.