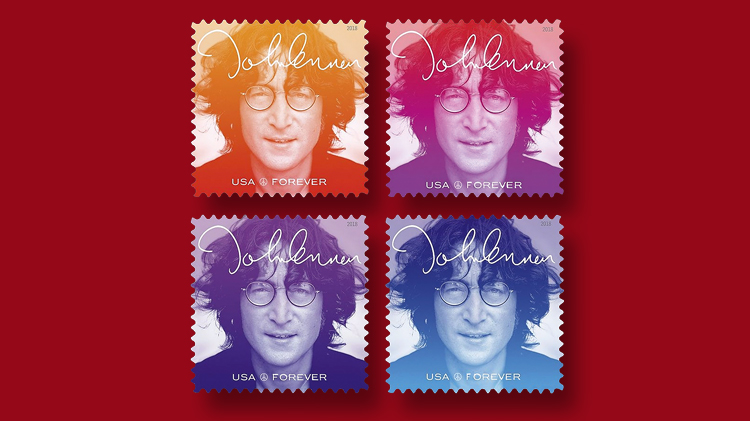 Four new United States stamps will be issued Sept. 7 to honor John Lennon. As a member of the Beatles and with his later solo career, Lennon is easily one of the most famous musicians and songwriters of the rock era.

Along with his wife Yoko Ono, Lennon was also a prominent activist in the peace movement of the 1960s and 1970s.

The four nondenominated (50¢) forever stamps share an identical basic design but display different color schemes. Each features the same black-and-white photograph of Lennon taken by Bob Gruen in 1974 for the Walls and Bridges solo album.

The stamp images on the pane of 16 are tinted by a range of gradient colors that change from the top of the pane to the bottom.

Each stamp shows a facsimile of Lennon’s signature in dropout white across the top of the portrait. “USA” and “FOREVER” appear in the lower part of the stamp, separated by a small peace symbol.

The stamps are the eighth entry into the U.S. Music Icons commemorative stamp series and the first in that series to feature more than a single stamp variety.

Neal Ashby designed the stamps and typography, as he did for two earlier issues in the series honoring Lydia Mendoza (Scott 4786) and Ray Charles (4807), both in 2013.

The art director is Antonio Alcala.

“The stamp pane is designed to resemble a vintage 45 rpm record sleeve,” according to the Postal Service, with the stamp side showing a bit of a record peeking out at the top.

The reverse side of the pane’s backing paper features a black-and-white photograph by Peter Fordham of Lennon at the white Steinway grand piano he bought as a gift to Ono. The image was used to promote the 1971 solo album Imagine.

The Postal Service has announced a print quantity of 40 million stamps.

The Lennon stamps are being issued nearly two and a half years after the most recent Music Icons issue, a forever stamp honoring jazz singer Sarah Vaughan (Scott 5059) that debuted March 29, 2016.

A first-day ceremony for the Lennon stamps will take place Friday, Sept. 7, at 11 a.m. at the Naumburg Bandshell in New York City’s Central Park, west of E. 72nd Street and Fifth Avenue.

Postmaster General and USPS CEO Megan J. Brennan is scheduled to officiate the first-day ceremony. Additional participants are expected but have not been announced.

It is unlikely that any other USPS events will take place. Stamp announcement 18-26 in the Aug. 2 Postal Bulletin includes this unusual directive: “Special dedication ceremonies for the John Lennon stamps are not authorized.”

John Winston Lennon was born Oct. 9, 1940, in Liverpool, England. His parents divorced, and though he had regular contact with his mother, Julia, as a boy he lived mostly with his Aunt Mimi and her husband, George.

As a youngster he became interested in stamp collecting when a cousin gave him a Mercury stamp album. His boyhood album survives and was purchased in 2005 by the Smithsonian National Postal Museum in Washington, D.C., which has displayed it at the museum and at World Stamp Show-NY 2016.

The album can be viewed at the museum's website.

Lennon’s mother taught him to play the banjo and bought him his first guitar. He formed a music group called the Quarrymen in 1956 while still in his teens. Two other guitarists were soon added: Paul McCartney (who would later take up bass guitar) and George Harrison. Other members came and went before drummer Ringo Starr was added, with the four young men calling their group the Beatles.

After a few years of playing clubs and smaller gigs, in 1962 the band recorded the song Love Me Do written by Lennon and McCartney. Lennon is known as a guitarist and pianist, but he also played the distinctive harmonica riff on Love Me Do.

Within months the band achieved unparalleled international success, topping the charts with every new release.

Lennon and McCartney teamed up to write most of the Beatles’ greatest hits, though some that were credited to both songwriters were written primarily by either one or the other. Among the songs made famous by the Beatles that have been attributed to Lennon are Help and Ticket to Ride (both 1965), All You Need is Love and Strawberry Fields Forever (both 1967).

Though the group disbanded in 1970, its influence on popular music remains monumental.

Lennon released experimental recordings with Ono beginning in 1968, and also issued the singles Give Peace a Chance and Cold Turkey the following year.

The album John Lennon/Plastic Ono Band, was released in 1970 and was followed by six additional studio albums before his death. The album Milk and Honey (with Ono) was released posthumously in 1984.

Lennon has been featured on many postage stamps worldwide. The Beatles were honored on a 33¢ U.S. stamp issued Sept. 17, 1999, in the Celebrate the Century series (Scott 3188o). Great Britain pictured Lennon with William Shakespeare on a 34-penny stamp in 1988 (Scott 1225), and issued a set honoring the Beatles in 2007 that includes several stamps showing all four members on album covers (2420-2426).

Lennon was married to Cynthia Powell from 1962 to 1968. Their son Julian, a musician and photographer, was born in Liverpool in 1963.

Lennon and Ono were married in 1969. Sean Ono Lennon, who is also a musician, was born in New York City on his father’s birthday in 1975.

In 1965, Lennon was honored by Queen Elizabeth II with his appointment as a Member of the Order of the British Empire, along with the three other Beatles. He returned the honor four years later as a gesture to protest British war efforts.

Lennon was posthumously honored with a Grammy award for lifetime achievement in 1991, and earned seven Grammy awards with 34 nominations. He was inducted into the Songwriters Hall of Fame in 1987, and into the Rock and Roll Hall of Fame twice — with the Beatles in 1988, and as a solo artist in 1994.