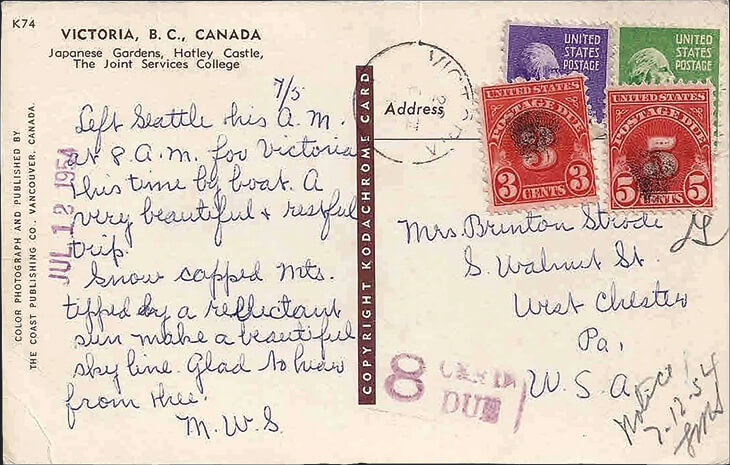 A July 1954 postcard mailed from British Columbia to Pennsylvania was franked with a 1¢ and a 3¢ United States stamp, invalid for use from Canada. The postcard was correctly assumed to be unpaid by the Canadian exchange office, which added the hand stamp “8 CENTS / DUE.” The U.S. delivery office affixed 8¢ in postage due stamps, confirming the due amount. As the card was deliverable, the postage due stamps indicated that the due postage was paid by the addressee. 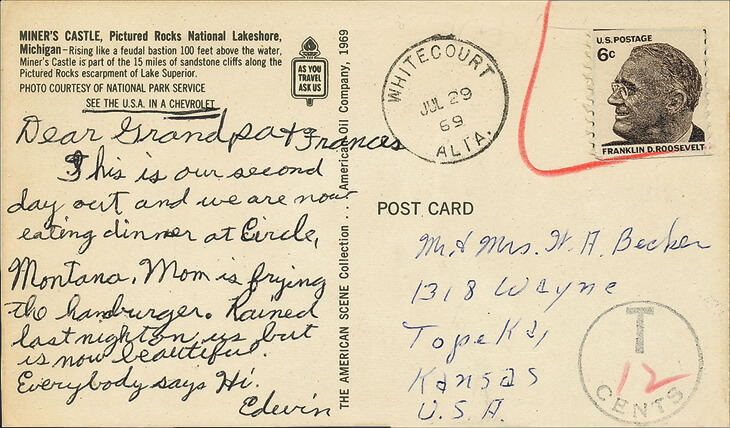 The Canadian exchange office placed the seldom-seen red-penciled line — an indicator of invalid postage — around the U.S. 6¢ Roosevelt stamp on this 1969 postcard mailed from Alberta, Canada, to Topeka, Kans. The Canadian handstamp “T/12/CENTS” correctly indicates that double the 6¢ treaty postage was due. Since no U.S. postage due stamps were affixed, it is not clear that the 12¢ postage due was collected.
Previous
Next

Postcards mailed from Canada to the United States are quite common. In my experience, it is also common to find these cards franked with U.S. postage — postage that is invalid.

Presumably, U.S. citizens carry this domestic postage across the border with them, then incorrectly use it on postcards they mail back to the United States.

Since July 1, 1924, per the July United States Official Postal Guide of 1924, page 145, insufficiently prepaid articles from Canada were subject to payment of double the deficient postage.

Through extensive research in successive volumes of U.S. Postal Laws and Regulations, I have been able to show that postage due stamps or their equivalent on insufficiently paid items, whether addressed to a carrier or noncarrier city, indicate that the postage due has been collected, unless the letter was undeliverable.

The first illustration shows such a use during the 4¢ rate period, where the 1¢ (Scott 804) and 3¢ (807) U.S. Presidential series stamps were used for franking on a postcard mailed in July 1954, from Victoria, British Columbia, Canada, to a Pennsylvania address. The postcard was correctly noted by the Canadian exchange office to be unpaid, due to the invalid postage, and the red handstamp “8 CENTS/DUE” was placed there.

The question now arises: According to Universal Postal Union regulations, was this the correct manner in which invalid postage was to be handled in the international mails?

For historical context, in the UPU Treaty of Paris of 1878, the following is found: “In case use has been made of postage-stamps not valid for prepayment, no account is taken of them. This circumstance is indicated by a cipher (0) placed at the side of the postage stamps.”

When postage stamps or postage-paid impressions are used which are not valid for the prepayment of postage in the country of mailing, that fact is indicated by a zero (0) marked alongside them and a line in pencil drawn around them.

It is my experience that, regarding the use of invalid postage in the international mails, one finds cases where the “(0)” marking and/or a penciled line, and/or an inked line are used, or, instead, none of them is used.

On the other hand, in the specific instance of the use of invalid U.S. postage in the Canadian mails, I rarely see any of these markers. For instance, note the first illustration, where the lack of any UPU-type marker is typical.

Therefore, I was surprised to find the example pictured in the second illustration, where the Canadian exchange office drew the red-penciled line around the invalid U.S. franking.

This is a postcard mailed July 29, 1969, from Whitecourt, Alberta, Canada, to Topeka, Kans. It was franked with the 6¢ Roosevelt stamp from the Prominent Americans series (Scott 1284). As the U.S. stamp was invalid for postage in Canada, it received the red-penciled invalid-postage indicator.

The Canadian handstamp “T/12/CENTS” indicates that, correctly, double the 6¢ treaty-rate postage was due. But again, the addition of the red-pencil indicator is rarely seen in such circumstances.

Since no U.S. postage due stamps were placed, it is not clear that the 12¢ postage due was collected.

Tony Wawrukiewicz and Henry Beecher are the co-authors of two useful books on U.S. domestic and international postage rates since 1872. The third edition of the domestic book is now available from the American Philatelic Society, while the international book may be ordered online here.