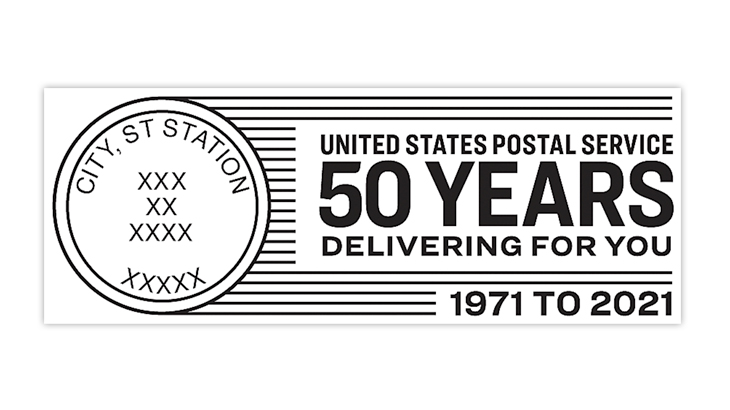 This postmark recognizes the 50th anniversary of the establishment of the United States Postal Service on July 1, 1971. The USPS became an independent federal agency on that date.

Thursday, July 1, is an important date for the United States Postal Service because the independent federal agency turned 50 on that day.

That milestone, marking the July 1, 1971, date that the USPS became operational, has largely been ignored by the agency.

The Postal Service’s historian issued a couple of papers marking the event, and the American Postal Workers Union held a webinar (online conference) to note the day.

That’s quite a contrast to its 1971 birthday when an 8¢ stamp bearing the new agency’s seal (Scott 1396) was issued on July 1 to mark the occasion. Post offices across the country held open houses, and President Richard Nixon proclaimed the day “National Postal Service Day.”

There will be a celebration in 2025 to mark the 250th anniversary of the American postal system, a big event that former Postmaster General Megan Brennan had a key role in planning.

But as one postal official said of the Postal Service’s 50th anniversary, “Don’t expect much of anything.”

Some post offices may decide to use a new postmark noting the 50th anniversary, but no big national celebration was planned.

For USPS historian Jennifer Lynch and others, it is an important milestone.

The Postal Service’s 50th Anniversary Oral History Project was a product of her office.

Titled “50 Years of Service to the Nation,” it included interviews of 25 postal workers who were on the job in 1971 when “this historic transition took place,” the paper notes.

The workers expressed views on their pay, working conditions, changes in delivery vehicles, memories of their work and stamps.

William R. Pendergrass, a window clerk at the Ventura, Calif., post office, recalled selling 6,000 29¢ Elvis Presley stamps (Scott 2721) on Jan. 8, 1993, the day that the best-selling commemorative was issued. There were 80 people in line at the post office when it opened that morning, Pendergrass said.

As the historian’s reports make clear, hopes for the new USPS were high in 1971.

Postmaster General Winton Blount had directed a week of postal clean-up to make sure offices were clean and tidy for the open houses.

Nixon was unable to attend the July 1 ceremonies in Washington, D.C., but he issued a message stating that he considered the formation of the USPS “one of the major achievements of my administration.”

Today no one in the administration of President Joe Biden is claiming ownership of the USPS, saying that Postmaster General Louis DeJoy needs to get the mail moving better.