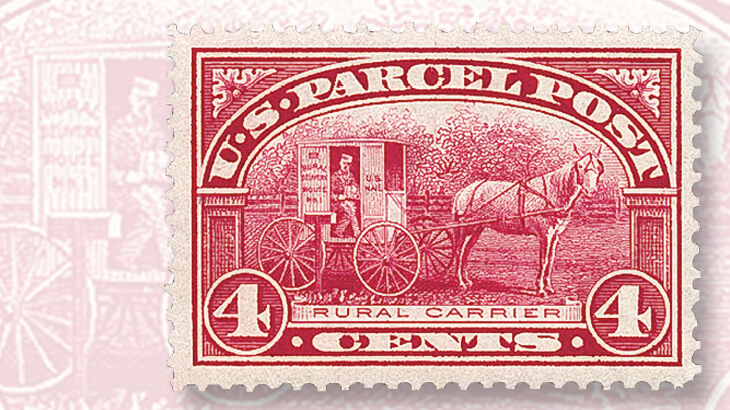 The actual 4¢ Rural Carrier parcel post stamp is carmine rose, while the version on the Oklahoma Philatelic Society’s souvenir sheet is purple. 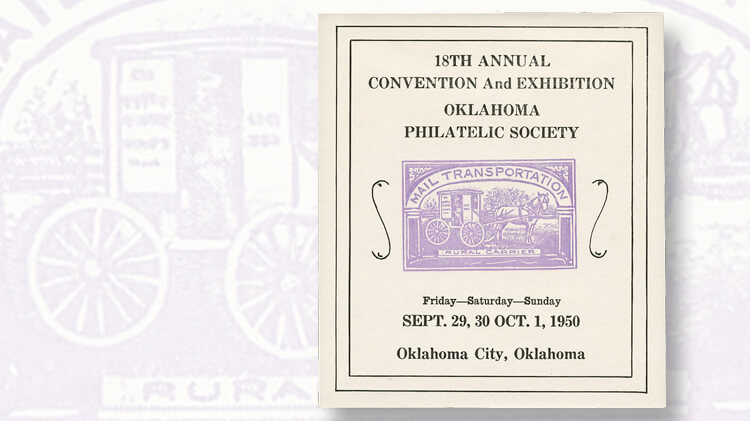 This Oklahoma Philatelic Society souvenir from 1950 features a representation of the 4¢ parcel post stamp honoring the rural carrier.
Previous
Next

It’s unusual to see back-of-the-book issues used as illustrations on stamp club exhibition souvenirs, but that is what the Oklahoma Philatelic Society did when creating the souvenir sheet honoring its 18th annual convention and exhibition in 1950.

The souvenir sheet features a purple version of the 4¢ parcel post stamp of 1913. The actual stamp is carmine rose.

The original stamp and the club version honor the rural carrier, but the club version is a good deal clearer than the actual stamp, where the horse and wagon seem to be lost in the dark background.

In the 1940s and 1950s, stamp designs were often replicated on souvenir sheets and in cachets produced as souvenirs of club shows. It is rare to see that in the modern era. This might partially be due to the Postal Service’s copyrighting of stamp designs, beginning with the 20¢ first-class era that began in 1981.

Also, I think it is too much trouble to do this sort of thing in our era when everyone is running from pillar to post, and then there is the sense I have that fewer and fewer clubs hold the sort of elaborate exhibitions that would justify going to the trouble of creating these souvenirs.

Still, they are interesting to collect as remnants of a bygone age.