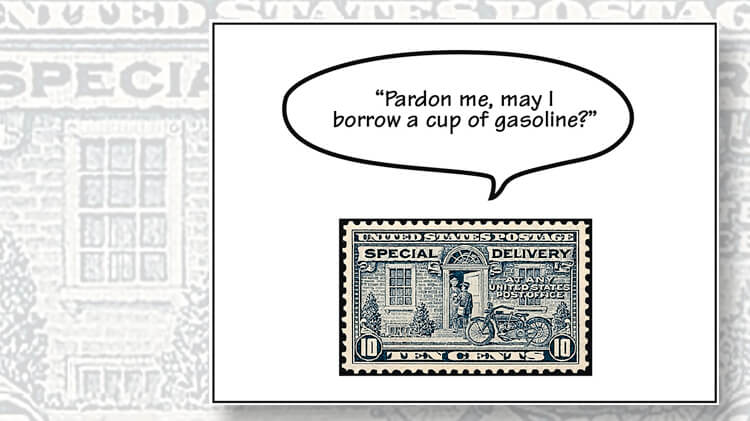 Pizzas! That’s what many Linn’s readers thought of when they looked at the delivery being made on the the cartoon contest stamp for January, the 1922 10¢ special delivery stamp.

David D’Hondt of Sun City, Calif., represents this group with, “I know I’m late — That’s why the pizza is free!”

Another group of entries focused on the motorcycle and its meaning in more recent times. Two of these stood out, though they went in quite different directions.

“Took Fonzie’s motorcycle to deliver this. Hope he won’t miss it!” was sent by David Kiehn of Collierville, Tenn.

The cartoon contest has been a monthly feature of Linn’s since December 1986. In that time, we have never had a three-caption entry. Jerry Login of New York, N.Y., crashed through that barrier with this:

This month’s winner of the nonphilatelic part of the contest is William Greenawalt of Dayton, Ohio.

On the philatelic side, Robert Fabian of Needville, Texas, takes the prize with: “No ma’am, special delivery does not come with an extra song and dance.”

“After 17 years, I got a bicycle. After another 20, I got a motorcycle. How much longer ‘til I get a Curtiss Jenny?” by Steve Kotler of San Francisco, Calif.

“I can’t believe I’m delivering to a building with a Special Delivery sign above the door!” by Brian McClay of Magalia, Calif.

“Congratulations! You’ve won the Publisher’s Clearing House prize of $100 a week for the rest of your life!” from George Schaetzle of Sheboygan, Wis.

“I have an express mail for you Mr. Ambassador. It’s a pink slip from President Trump,” from David Vikan of Dickerson, N.D.

“No, I don’t believe we’ll ever see Forever stamps …Not in a hundred years!” by Dave Kohler of Flushing, N.Y.

The next cartoon caption contest will be announced in the March 13 Linn’s.