What is Donald Trump saying from the White House featured on this stamp? 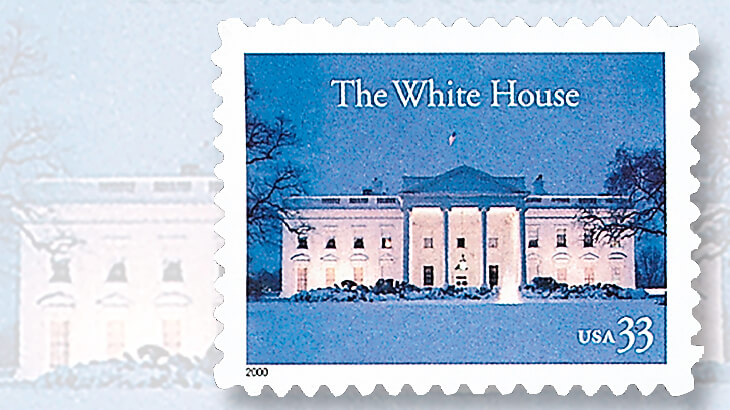 The cartoon caption contest stamp for March is the 33¢ stamp issued in October 2000 celebrating the 200th anniversary of the White House. Put yourself in the president’s shoes, and tell me what you might be thinking or saying about his new job, starting a stamp collection, the “swamp” in Washington, D.C., or whatever else occurs to you. There will be a prize for the best philatelic and nonphilatelic lines. The rules to enter the contest are in the accompanying article. Entries must be received by March 24 for a chance to win a prize.

We used the 1969 6¢ Beautification of America stamp showing the Capitol with azaleas and tulips (Scott 1365) for the September 2016 cartoon caption contest, inviting readers to put themselves in the persona of a representative or senator.

It only seems fair to travel to the other end of Pennsylvania Avenue to give Linn’s readers a chance to think about how the current occupant of the White House might see things.

So, for the March contest, we will use the 33¢ 200th Anniversary of the White House commemorative issued Oct. 18, 2000 (Scott 3445), as the cartoon caption contest stamp for March. The stamp pictures the White House illuminated at nightfall, surrounded by a blanket of fresh snow.

If you were the president inside, warm and cozy, tell me what might you be thinking or saying about philately, politics and policies, the “swamp” in Washington, D.C., or whatever else floats your boat.

Given that President Trump inspires strong reactions on both ends of the political spectrum, please keep your entries printable.

To be considered for the prizes, entries must reach me no later than March 24.