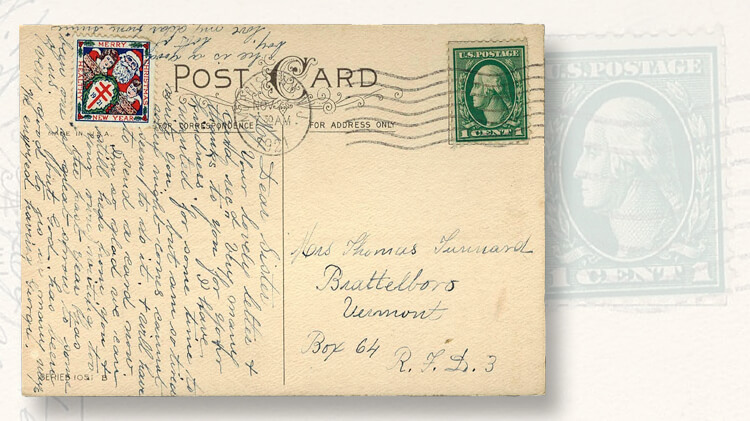 A new earliest-known use date of Nov. 23, 1921, is established by this postcard. It is a bit unusual in that the seal is tied by the written message of the sender rather than by the cancellation, but there is no doubt that it qualifies as an EKU. 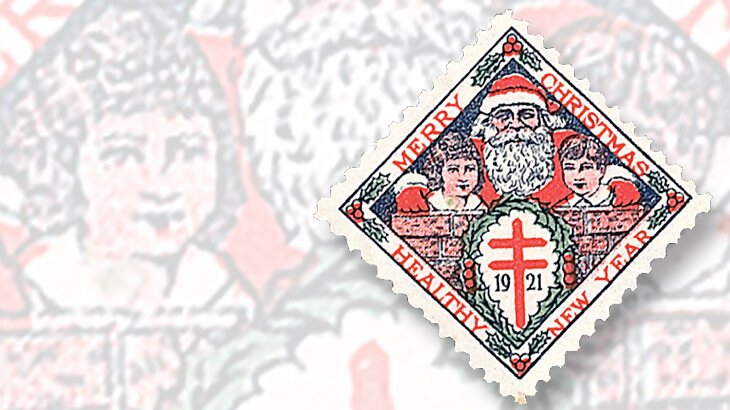 The 1921 Christmas seal has a new EKU, as shown on the postcard in the first illustration.
Previous
Next

Since 1999, I have presented in this column an annual summary of earliest-known uses of United States Christmas seals issued from 1908 to 1935.

In 1907 and from 1936 onward, there are established first days. But from 1908 to 1935, the seals were shipped in November, and there was no injunction to the recipients to hold them for a given release date.

For that reason, the seals were distributed to potential users when received, and it has become a challenge to look at cancellation dates to try to advance the first day of use.

This year’s report, in the form of the chart shown at the bottom of this post, includes two new EKUs, highlighted in bold type. Both were reported by George Painter.

The first, for 1921, is on a postcard canceled Nov. 23, beating the prior record by three days. However, this example is unusual in that it the seal is tied to the card by the sender’s own handwriting, instead of the cancellation.

Some might sneer because the tie is not the cancel. However, if the seal use can be tied to the cancel by any other factor that establishes concurrent use, it is good.

The second update, for the 1933 seal, is dated Oct. 19, besting the prior date by an astounding 30 days. I have to believe that the user had access to the seals during the production process, and used them on this cover well before distribution.

Whatever the reason, the facts are the facts, and we don’t get to second guess them from our perch almost 80 years after the deed was done.

If anyone can advance any EKU date for a Christmas seal in the chart, contact me, John Hotchner, Box 1125, Falls Church, VA 22041-0125, or by email at jmhstamp@verizon.net.

For collectors with an interest in Christmas seals, I recommend the Christmas Seal and Charity Stamps Society, the national club that delves into the history of these seals and their many varieties and uses.

The society publishes catalogs for U.S. and foreign seals, as well as an excellent quarterly all-color journal, Seal News, that highlights both modern and older material. Each issue also contains a club auction.

Annual dues are $20. More information about the club is available on its website, or from Lou Caprario, Secretary-Treasurer, 91 Fairview Ave., West Orange, NJ 07052.