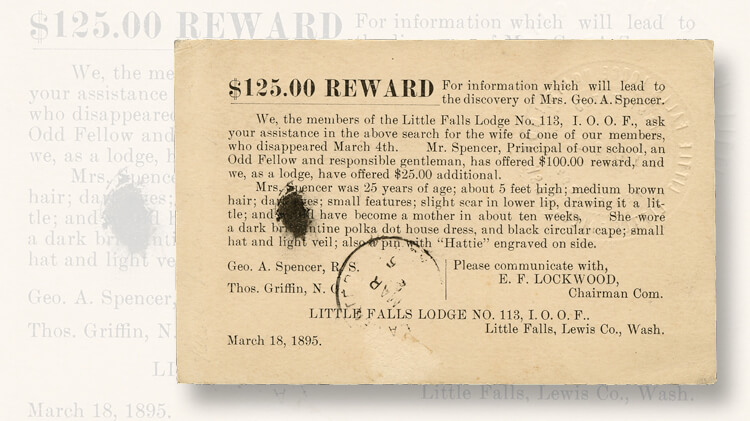 This 1¢ postal card canceled in March 1895 in Little Falls, Wash., has on the back a notice requesting assistance, with a $125 reward, in finding a missing wife.

Previously in this column, I have featured United States postal cards publicizing missing horses, stolen cars, and wanted notices for crooks of various descriptions, but something a bit more unusual recently crossed my desk.

The text on the card from the Little Falls Lodge No. 113 of the I.O.O.F (Independent Order of Odd Fellows) is dated the previous day, March 18. It offers a $125 reward “for information which will lead to the discovery of Mrs. Geo. A. Spencer.”

The text continues: “We, the members of the Little Falls Lodge No. 113, I.O.O.F., ask your assistance in the above search for the wife of one of our members, who disappeared March 4th. Mr. Spencer, Principal of our school, an Odd Fellow and responsible gentleman, has offered $100.00 reward, and we, as a lodge, have offered $25.00 additional.

“Mrs. Spencer was 25 years of age; about 5 feet high; medium brown hair, dark eyes; small features; slight scar in lower lip, drawing it a little; and should have become a mother in about ten weeks. She wore a dark [word undecipherable] polka dot dress, and black circular cape; small hat and light veil; also a pin with ‘Hattie’ engraved on side.”

Spencer being a fairly common name I have not been able to find out the end of the story. The card is addressed to another Odd Fellows lodge in Washington. Presumably the state would have been blanketed. I expect that law enforcement would have gotten involved as well.

I hope she was found safe and sound, if she wanted to be.