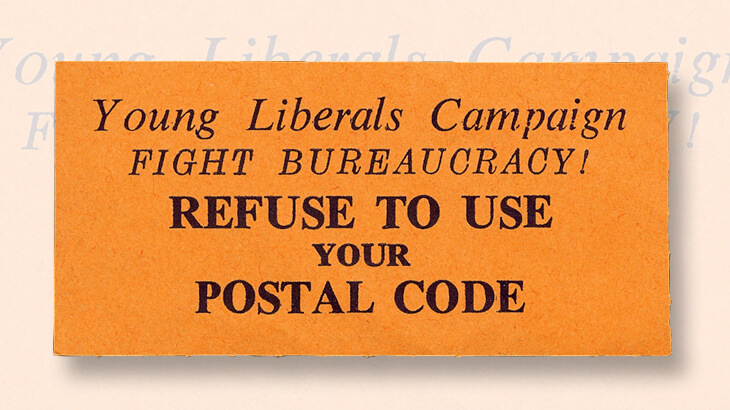 This unattached label is a mystery no longer, thanks to a Linn’s reader who believes it is a Canadian label from the 1970s.

Another puzzle has been answered, thanks to Linn’s reader Charles Belair.

Illustrated in this May 12, 2016, U.S. Stamp Notes column was a label with this five-line inscription “Young Liberals Campaign/Fight Bureaucracy!/Refuse to Use/Your/Postal Code.” I wondered: Who was behind the label and what was the reason for it?

I assumed it was a label from the United States, but I was wrong.

Belair noted that “Postal Code” is the Canadian version of the U.S. ZIP code.

As for the label itself, he wrote: “The Young Liberals is the youth organization for the Liberal Party in Canada. They came to national prominence as the result of a campaign promise Pierre Trudeau made to capture the youth vote when he was campaigning for Prime Minister. This would be roughly about the same time as the postal code system was proposed to be instituted nationally.

“Although I have no hard evidence, the confluence of these two events leads me to believe that the label originated in the early-to-mid 1970s in Canada.”