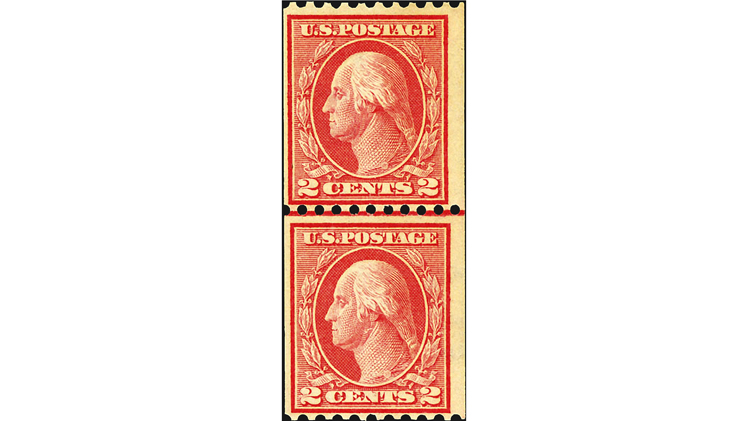 The July 15 Cherrystone sale is offering a never-hinged example of the 1915 2¢ red George Washington Type I vertical joint line pair. 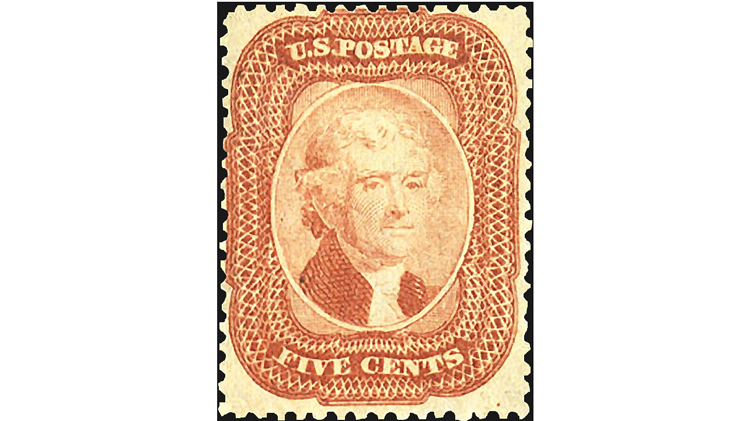 A stamp that can be hard to find with original gum, the 1857 5¢ brick red Thomas Jefferson Type I. This unused example will be auctioned July 15 by Cherrystone Auction Galleries. 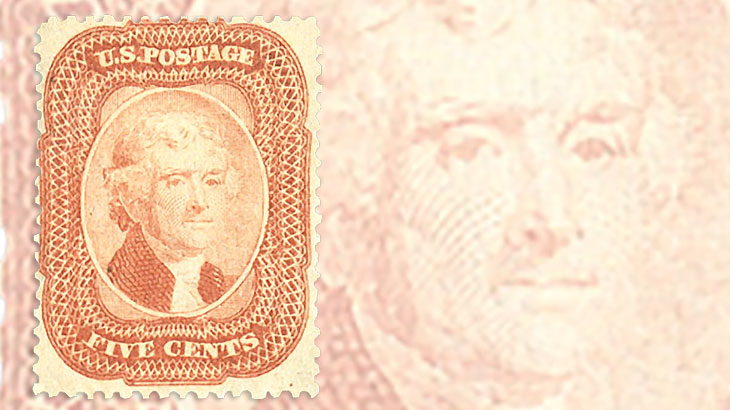 The upcoming public auction of the Confino family collection of United States stamps 1847-1933 is taking place at 1 p.m. on July 15, at Cherrystone Auction Galleries in New York City.

The brick red stamp, which is listed in the 2015 Scott Specialized Catalogue of United States Stamps and Covers at $80,000 unused, is described by Cherrystone as having lightly hinged original gum, usual centering, and beautiful color, “a fresh and fine example of this rare stamp in completely sound condition.”

The stamp is accompanied by Philatelic Foundation certificates dated 1974 and 2015.

Cherrystone notes that approximately 20 of these stamps with original gum have been documented, allowing for duplicate offerings and excluding the one known original-gum block.

“Of those, about half had perfs touching on two sides or were deeply cut into on one side. Almost two thirds have small faults or stains.”

The stamp is offered in the Confino family sale with an estimate of $15,000.

This second stamp is also unused with original gum, plus a small hinge remnant. It’s described as “well centered for this difficult issue, really just in at top,” with deep rich color.

Its Philatelic Foundation certificates are from 1975 and 2015.

The plate block selection in this sale includes several from the 1893 Columbian Exposition issue, along with later Exposition commemoratives, plus plate blocks of the first six U.S. airmail issues (Scott C1-C6).

An attractive set of three never-hinged plate number blocks of six of the 1930 Zeppelin airmails (Scott C13-C15) is also on offer.

The coil stamp selection begins with a 1908 5¢ blue Lincoln vertical coil pair (Scott 317), of which fewer than 80 genuine pairs are thought to exist, according to the auction catalog description. This pair has a hinge remnant on the top stamp, and the bottom stamp is never hinged. It is offered with a $6,000 estimate.

Most of the later coils are offered as line pairs, including a never-hinged 1915 2¢ red George Washington Type I vertical joint line pair (Scott 449).

Described as one of only a handful of never-hinged joint line pairs in existence, it has both 1975 and 2015 Philatelic Foundation certificates.

The auction also offers stamps from the back of the book, including postage dues, Officials and more, plus a number of appealing postal cards, and larger lots.

The individual lots from the Confino family collection can be viewed on the Cherrystone website, where online bidding is also offered.