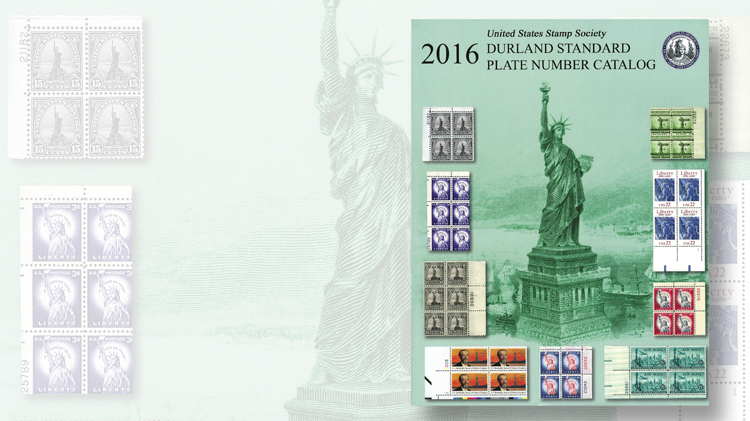 The new 2016 Durland Standard Plate Number Catalog has been published by the United States Stamp Society.

Collectors of plate numbers on United States stamps will be pleased to learn that a revised and expanded 2016 Durland Standard Plate Number Catalog, edited by Kim Johnson, has been published by the United States Stamp Society.

The USSS publishes the catalog every four years. A supplement to the 2012 edition was published in 2014.

The 448-page 2016 edition is complete with Scott catalog numbers from the Scott Specialized Catalogue of United States Stamps and Covers, which it uses through an agreement with Amos Media Co., the parent company of Linn’s Stamp News and the Scott catalogs.

The catalog lists and values all of the known and recorded plate numbers for U.S. stamps in panes, coils and booklets, including regular and commemorative postage, airmails, special delivery stamps, and postage dues.

The Durland catalog was first published in 1950 by Clarence B. Durland, owner of Sterling Stamp Co. in Abington, Mass. Vol. 1 of the first edition was 32 pages. Vol. 2 grew to 40 pages.

On the title page of the first catalogs, Durland said that he published the catalog “in answer to the thousands of plate collectors requesting a dependable guide … I am aware of my obligation to publish retail quotations that make sense.”

Durland published the catalog until 1981. In 1984, the Bureau Issues Association, the predecessor of the USSS, began publishing the catalog.

The catalog is an authoritative reference work for plate numbers and plate positions for United States stamps from 1851 to date.

U.S. stamp printer Toppan, Carpenter, Casilear & Co. was the first to print plate numbers on U.S. stamps, beginning with the 1851-57 series. The plate numbers accompanied the printer’s imprint in the margin paper of the pane.

The 2016 Durland catalog is the 10th edition published by the USSS. The catalog is in its 66th year.

The cost of the 2016 edition of the Durland catalog is $30 for perfect-bound or spiral-bound ($25 for USSS members).