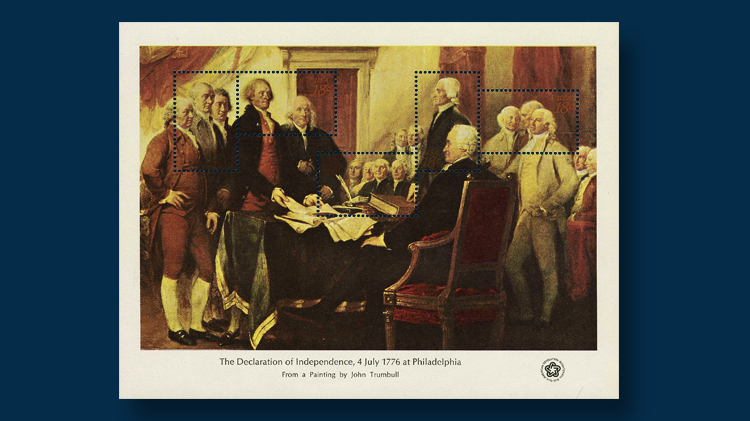 The May 17-19 H.R. Harmer auction will offer this 1976 United States Declaration of Independence souvenir sheet. The “USA 18¢” inscription is absent from only the stamp at far left on the sheet. The error was certified in 2008 but was never listed in the 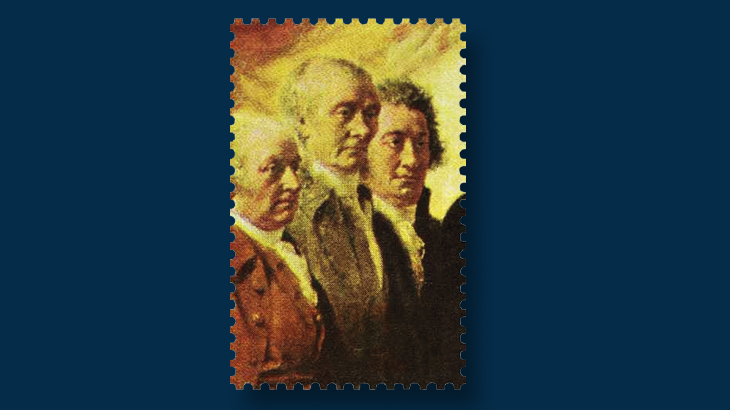 A previously unreported color-missing error on a 1976 United States souvenir sheet will be auctioned by H.R. Harmer during the firm’s May 17-19 sale in California. The auction will take place at the Hilton Costa Mesa, 3050 Bristol St., in Costa Mesa, just southeast of Los Angeles.

On the Declaration of Independence souvenir sheet error, the “USA 18¢” inscription is omitted from only the first of the five stamps in the sheet.

While the 2018 Scott Specialized Catalogue of United States Stamps and Covers lists 13 other errors on this souvenir sheet (Scott 1687), including several varieties with missing denominations, this specific variety has not appeared in the catalog, leading H.R. Harmer to speculate that it is “quite possibly unique.”

The Scott catalog editors became aware of the error when the souvenir sheet appeared in the H.R. Harmer auction catalog, and after research the Scott editors told Linn’s Stamp News that the error will be listed in the next edition of the Scott U.S. Specialized catalog as Scott 1687u.

The error was certified in 2008 by the American Philatelic Expertizing Service.

The auction firm describes the souvenir sheet as very fine, post office fresh and never hinged. It is listed with a starting price of $1,000.

The three-day auction includes U.S., British Commonwealth and worldwide stamps, covers and collections, and features the property of more than 140 consignors and estates.

The auction opens with a diverse selection of 19th-century U.S. proofs and essays, leading into examples of the 1847 first U.S. issues (Scott 1-2), both off cover and on.

There are interesting postal history finds throughout the sale, including an unusual example of a 1908 2¢ carmine George Washington imperforate coil single, wound horizontally, on cover (Scott 344H, as listed in the catalog’s Imperforate Flat Plate Coil Stamps section).

The 1910 commercial cover has a neat Wall Street Station postmark from New York City tying the single stamp to the cover. The envelope is addressed to an individual in Dayton, Ohio.

H.R. Harmer notes that “only about three covers” are known franked with this variety. It is accompanied by a 2014 certificate from American Philatelic Expertizing Service and offered with a starting bid of $150 against a Scott catalog value of $600. The Scott value is given in italics, indicating an item that can be difficult to value accurately.

The international material in this sale is also diverse, with a worldwide selection of stamps and covers.

Three individual lots each offer a single of China’s 1980 8-fen Year of the Monkey stamp (Scott 1586). Each example is described as very fine, never hinged, with “usual tiny bits of black offset on gum.” The Scott catalog value (in italics) is $1,750; the start price for each stamp is $800.

One of the three examples in this auction is a right margin single.

A selection of Danish airmail material in this sale includes imperforate trial color proofs from the 1925 first airmail set, layout proofs in black from the same set, unusual postal history uses and more.

The catalog for this auction can be viewed online, with online bidding options available. Bids also can be placed by phone, fax or mail, and live bidding is conducted during the sale through Stamp Auction Network.