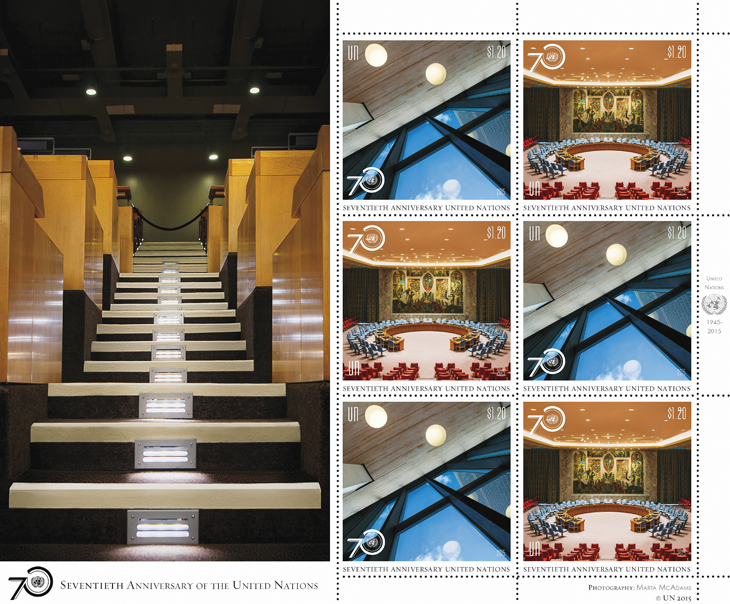 The United Nations Postal Administration’s pane of six $1.20 stamps honoring the 70th anniversary of the United Nations includes two different designs, one depicting a view from the Woodrow Wilson reading room in the Dag Hammarskjold Library and the other 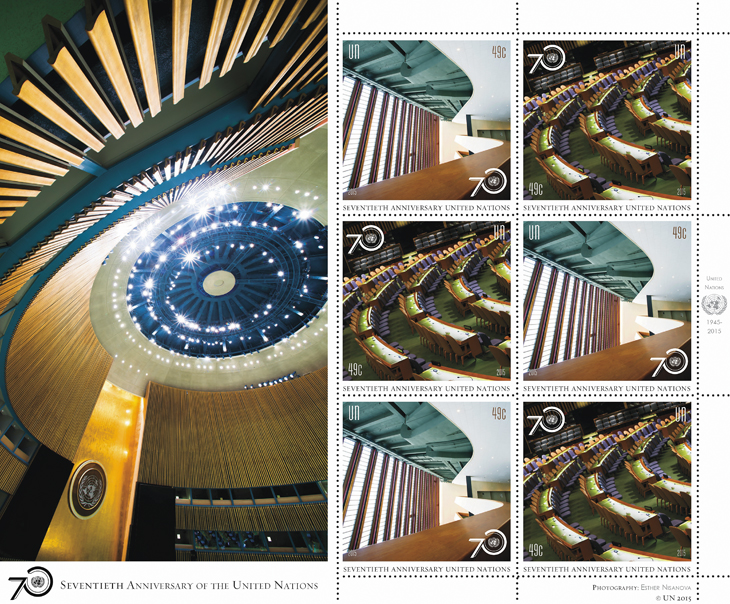 The United Nations Postal Administration issued six panes of six stamps, each with two different designs, and three souvenir sheets Oct. 23 to celebrate its 70th anniversary. All of the designs reproduce photographs of the U.N. headquarters in New York Ci 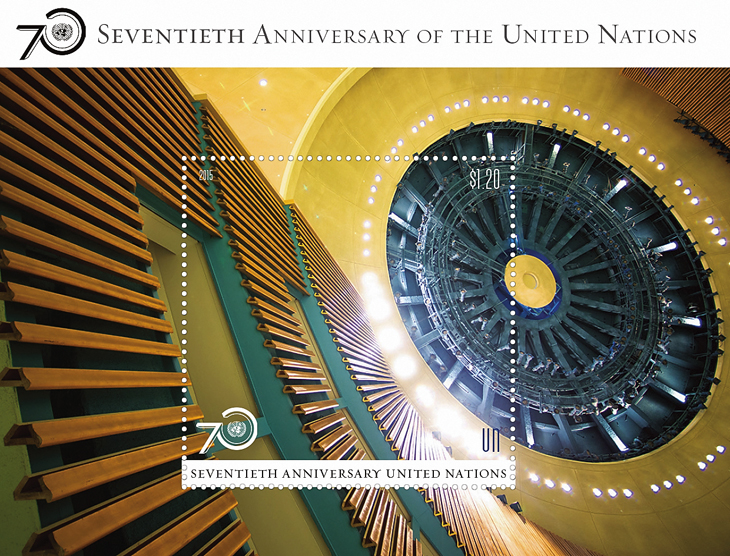 A United Nations Postal Administration souvenir sheet with a $1.20 stamp pictures the ceiling in the General Assembly Hall.
Previous
Next

The United Nations charter was signed June 26, 1945, in San Francisco and went into force Oct. 24 of that year. United Nations Day is celebrated each year on Oct. 24.

In 1947, after receiving offers from cities around the world, the United Nations decided to build its headquarters on land donated by John D. Rockefeller on the East River in New York City. The design of the headquarters was created by an international team of architects under a director of planning, American architect Wallace K. Harrison. Le Corbusier of France and Oscar Niemeyer of Brazil were among the other architects on the team.

Niemeyer said in 1947: “When we make a building for the U.N., we must have in mind what is the U.N.? It is an organization to set the nations of the world in a common direction and gives to the world security. I think it is difficult to get this into steel and stone. But if we make something representing the true spirit of our age, of comprehension and solidarity, it will by its own strength give the idea that that is the big political effort, too”.

Construction on the headquarters complex began in 1949 and was completed in 1952.

A seven-year renovation plan was announced in 2007. The photographs shown on the stamps were taken after the renovations were completed.

The press release from UNPA said: “For the past several years, the U.N. Headquarters in New York has undergone a historic renovation to update the building with a safer, more modern and sustainable work environment. While the integrity of the building and its architectural features have been maintained, there have been substantial improvements, making it more energy efficient, climate friendly and meeting stricter security requirements. Fittingly, this renovation has been completed just in time for the 70th Anniversary of the U.N. These enhancements have made it more resilient and at the same time reinforce the message of the U.N at 70 which is ‘Strong U.N. Better World.’ ”

The stamps were issued in panes of six, each with two different se-tenant (side-by-side) designs, and in souvenir sheets of one.

One stamp from each post office shows a photograph of the visitors lobby (49¢, 1fr and 1.70). Other locations also are pictured more than once on the stamps.

On the pane of 49¢ stamps, the visitors lobby is on the left-hand stamp in the top row and the General Assembly Hall is pictured on the right, as well as in the selvage.

The two $1.20 stamps show a view through the windows of the Woodrow Wilson reading room in the Dag Hammarskjold library, and a photograph of the Security Council. Stairs in the U.N. Economic and Social Council, or ECOSOC chamber, are seen in the selvage.

The ECOSOC chamber also is shown on the stamp on the left of the top row of the 1fr pane, with the visitors lobby on the right and the Trusteeship Council in the selvage.

Another view of the ECOSOC chamber, this time focusing on chairs, appears on a 1.90fr stamp. The facade of the Secretariat building is pictured on the other 1.90fr stamp. A picture taken from windows of the Woodrow Wilson reading room is shown in the selvage of this pane.

The €0.80 pane show similar views of the Trusteeship Council and the ECOSOC chamber on the two stamps, and the Security Council in the selvage.

The final pane contains €1.70 stamps showing the General Assembly Hall and visitors lobby. The ECOSOC chamber is pictured in the selvage.

The souvenir sheets feature photographs of the General Assembly Hall ($1.20), the visitors lobby (1.40fr) and the Trusteeship Council (€1.70).

The photographs shown on the stamps, the selvage and souvenir sheets were taken by Marta McAdams, a beauty, fashion and event photographer from Warsaw, Poland; and Esther Nisanova, a fine art and editorial photographer born in Moscow and now based in New York City.

Rorie Katz of the United Nations designed the stamps, and Cartor Security Printing printed them.