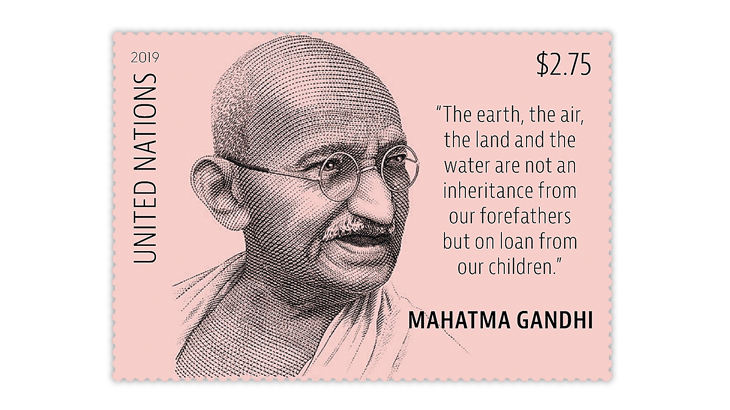 A United Nations $2.75 stamp honoring Mahatma Gandhi will be issued Oct. 2, on the 150th anniversary of his birth in 1869. Gandhi’s disciplined campaign of nonviolent resistance helped win India’s independence from the British Empire in 1947. 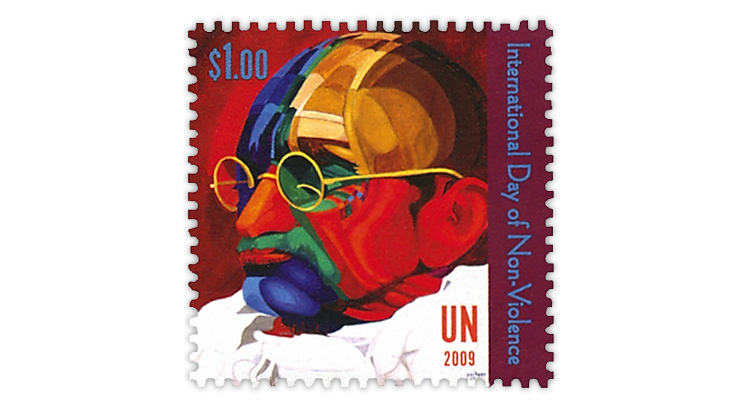 A vivid portrait of Gandhi is shown in Ferdie Pacheco’s design for the United Nations’ $1 stamp issued Oct. 2, 2009, for the 140th birth anniversary.
Previous
Next

On Oct. 2 the United Nations Postal Administration will issue a stamp honoring lawyer and anti-colonial activist Mahatma Gandhi on the 150th anniversary of his birth.

The $2.75 Mahatma Gandhi stamp is intended for use from the U.N. post office at U.N. headquarters in New York City.

He championed disciplined methods of nonviolent resistance that ultimately led to the independence of India from the British Empire on Aug. 15, 1947.

His legacy has since inspired the advancement of civil rights and freedom around the world.

“The name of Mahatma Gandhi transcends the bounds of race, religion and nation-states, and has emerged as the prophetic voice of the twenty-first century,” the UNPA said in its announcement of the new stamp.

The announcement concluded, “As today’s generation delves on the meaning of life amidst the plethora of complex problems, the life and philosophy of Mahatma Gandhi offers a powerful avenue to discern on what path to tread.”

Martin Morck, an accomplished and prolific stamp engraver, served as artist for the Mahatma Gandhi stamp. Rorie Katz of the United Nations was the designer.

The stamp features a detailed, engraved-style portrait of Gandhi. A quote from Gandhi appears to the right of the portrait, “The earth, the air, the land and the water are not an inheritance from our forefathers but on loan from our children.”

In overall appearance, the Gandhi stamp is similar to the 2-franc Nelson Mandela stamp the UNPA issued July 18, 2018, and the $1.30 Kofi Annan stamp issued earlier this year, on May 31. Although the three stamps are commemorative in nature, the UNPA describes them as definitives.

In sharp contrast, a multicolored portrait of Gandhi is shown in Ferdie Pacheco’s design for the United Nations’ $1 stamp issued Oct. 2, 2009, for the 140th birth anniversary. (Scott 996).

The new Mahatma Gandhi stamp measures 50 millimeters by 35mm and is perforated gauge 14 by 14.25. A total of 210,000 stamps were printed by Joh. Enschede Stamps of the Netherlands in sheets of 20.

In an article about duotone color on the Design Shack website, Carrie Cousins wrote: “Duotone prints are made in two shades of the same color or with black and one tint. The process uses two color plates made with the screen set at different angles.”