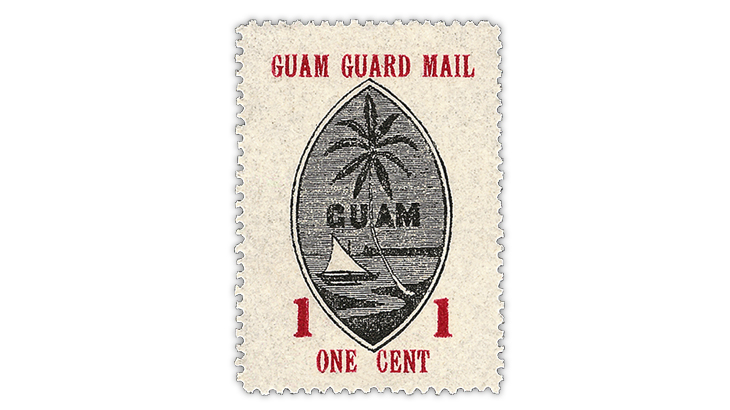 A former Spanish colony, Guam is an unincorporated territory of the United States in the western Pacific Ocean. It is the largest and most southerly of the Marianas Islands and the largest island in Micronesia.

The United States acquired Guam from Spain in 1898 through victory in the Spanish-American War.

A postal agent was appointed for Guam on March 29, 1901, from which time its postal service came under the U.S. Post Office Department. However, service was only provided to and from the island; there was no postal service within the island.

Guam’s governor, Cmdr. Willis W. Bradley of the U.S. Navy, established Guam Guard Mail on April 8, 1930, to provide for delivery of mail from the capital of Agana to other smaller towns on the island. Two Seal of Guam stamps (Scott M3 and M4) were issued July 10, 1930, to provide for prepayment of postage. The printing quantity for the 1¢ stamp was 1,000, and 4,000 for the 2¢ stamp.

Given that some stamps were used on mail, the low print runs mean that there are not that many unused stamps available. Both stamps are a good buy at or near Scott catalog value.