Updating older imagery in the Scott catalogs can prove difficult 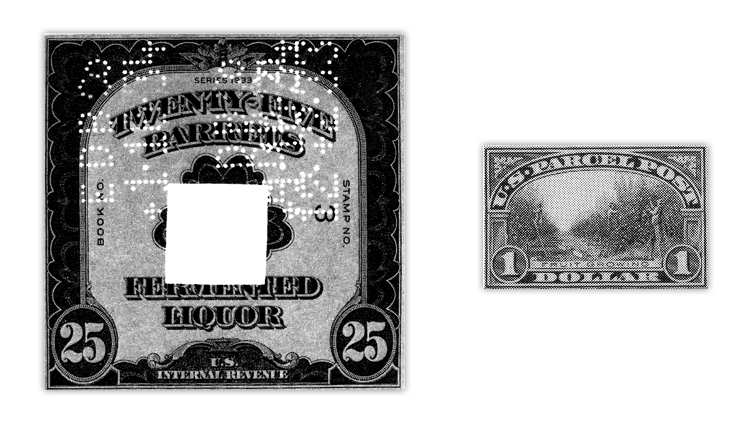 Two older black-and-white scans of stamps that remain in the Scott database. Shown at left is a United States beer revenue stamp, and at right is an essay of a 1913 parcel post stamp. Collectors are encouraged to provide an updated color image if possible

While putting the finishing touches on the 2021 edition of the Scott United States Specialized Catalogue of Stamps and Covers, I continue to be amazed at how many images of stamps, postal stationery, essays and more that we illustrate in color.

What a challenge that has been since the Scott catalogs started being published in color.

This year we were able to replace a few of the black-and-white images, but several still remain.

We need a scan of any one of the three stamps represented by that image to picture in the catalog, but our search keeps coming up empty.

So I am turning to the Linn’s readership to see if someone might have any of these three stamps lurking in their albums.

There are also a few postage items that we don’t have images of yet, but largely those are double transfer varieties or other plate flaws that aren’t typically seen.

The one I would most love to see updated with a high-resolution image is the “Prairie Dog” plate flaw on the 1928 5¢ Aeronautics Conference stamp showing a globe and airplane (Scott 650). Our image in the catalog is black-and-white and somewhat blurry.

The Embossed Revenue Stamped Paper section has a number of sketches instead of depictions of actual items in it. And collectors of essays should pay particular attention as that section probably has the largest number of black-and-white images that are still shown in the Scott catalog.

For example, also shown here is the poor-quality image of the single essay for the 1913 $1 Fruit Growing parcel post stamp (Scott Q12-E3). This essay carries a catalog value of $4,000 in italics, which probably is a nod to why this hasn’t been seen in the marketplace in a while.

I encourage any collector who can replace an old black-and-white image (not just in the Scott U.S. Specialized catalog, but anywhere in the world) with a color scan to email me at jbigalke@amosmedia.com or write to Linn’s Stamp News, Attn: Jay Bigalke, Box 4129, Sidney, OH 45365.

In my reply, I will provide the specifications we need for the scan.

Thanks in advance to those who are able to assist.