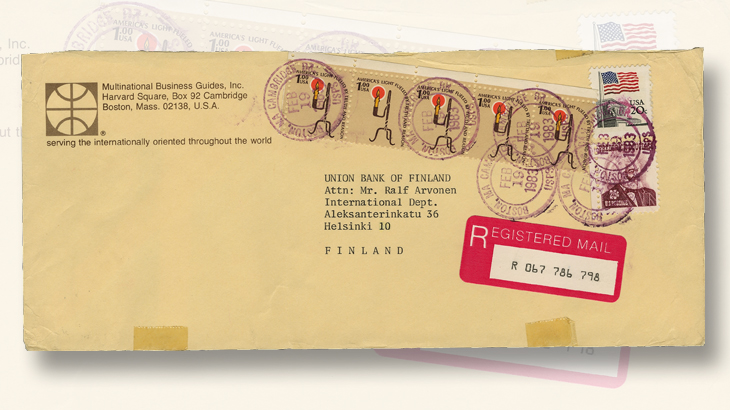 A strip of five $1 Rush Lamp and Candle Holder stamps pays most of the $5.45 postage required to send this registered cover from Boston, Mass., to Helsinki, Finland, on Feb. 19, 1983. A Helsinki receiver postmark on the back indicates the cover arrived March 2, 11 days after it was mailed. 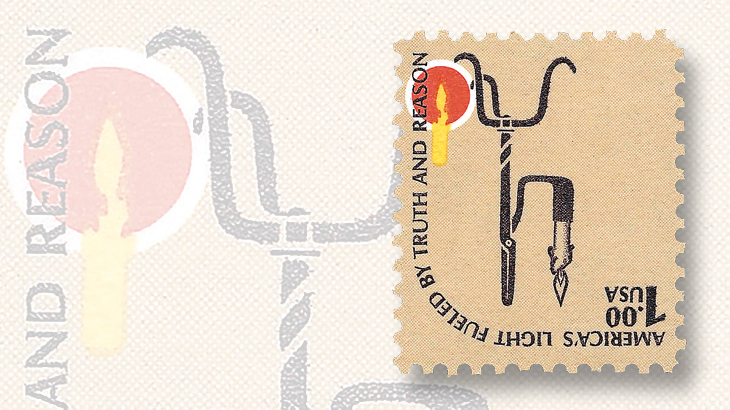 The so-called CIA Invert error of the $1 Rush Lamp and Candle Holder stamp. It was discovered in 1986 by a CIA employee in McLean, Va. Just 93 sound examples found their way into the hobby marketplace. 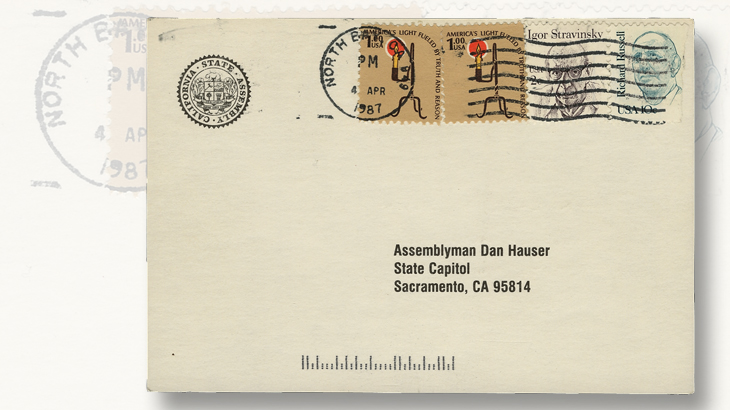 Two $1 Americana stamps were mistakenly used as 1¢ stamps on this postcard mailed to a California assemblyman at the 14¢ rate in April 1987. 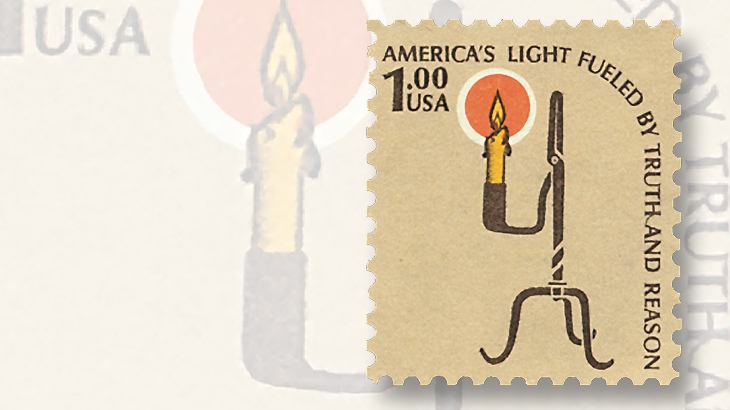 The $1 Americana stamp was issued July 2, 1979. A combination of engraving and lithography was used to print the design featuring a colonial rush lamp and candle holder.
Previous
Next

Each stamp in the Americana series features a central image and a curved line of text that runs along two sides of the stamp.

This month’s column takes a look at the $1 stamp (Scott 1610), which pictures a colonial rush lamp and candle holder.

The text “America’s Light Fueled By Truth And Reason” runs across the top and down the right side of the stamp.

Four colors were used to print the stamp: tan, brown, orange, and yellow.

Of these, the brown was printed using intaglio (recessed line engraving), and the tan, orange, and yellow were surface-printed using offset lithography.

The lithographed colors were applied first, followed by the engraved elements — the lamp and candle holder, text, and denomination — in brown.

Despite the best efforts of the Bureau of Engraving and Printing, four production errors occurred that eventually found their way into collectors’ hands: brown omitted (Scott 1610a); tan, orange, and yellow omitted (1610b); brown inverted (1610c); and tagging omitted (1610d).

Of these, the most famous and valuable is the brown-inverted error, known to collectors as the CIA Invert.

The somewhat cryptic name comes from the source of the original discovery: a CIA employee who went to the post office in McLean, Va., to purchase stamps for the agency’s use.

Among the stamps purchased was a nearly complete pane of 95 stamps that had the brown inverted. The original purchaser did not immediately notice the mistake, but another CIA employee did when a $1 stamp was required for a mailing.

A group of nine CIA employees decided to keep the error stamps. So they purchased 95 normal $1 stamps to replace the stock on hand at the time.

Word of the sensational discovery eventually got out, and a minor scandal ensued when people learned the CIA was involved.

The CIA conducted an internal investigation and demanded that the nine employees return the error stamps to the agency. Four refused and were subsequently fired.

In the years since, the CIA Invert has captured the imagination of error collectors. The story behind the object, as they say, is often more fascinating than the object itself.

The $1 Americana stamp was typically used in combination with other stamps to pay various postal fees. It also saw frequent use on heavier items requiring larger amounts of postage.

As regular readers of Dollar-Sign Stamps know, I have a fondness for dollar-denominated stamps mistakenly used as stamps denominated in cents.

Take a close look at the franking on the postcard pictured here.

At the time of mailing in April 1987, 14¢ postage was required. But the sender erroneously used two $1 Americana stamps as 1¢ stamps in combination with a 2¢ Igor Stravinsky and a 10¢ Richard Russell to send the postcard to an assemblyman in the California legislature.

This oversight wasted $1.98 in postage but resulted in a splendid piece of postal history.

Most international uses of the $1 Americana that I have seen are on registered or other covers sent via special means.

Illustrated nearby is a registered cover mailed Feb. 19, 1983, from Boston, Mass., to Helsinki, Finland.

A strip of five $1 Americana stamps combines with a 25¢ Frederick Douglass and a 20¢ Flag Over Supreme Court to exactly pay the $3.25 international registry fee, 60¢ international return receipt requested fee, and $1.60 postage for a 2-ounce mailing at 40¢ per ½ ounce.

Remnants of the pink return-receipt card are taped to the back of the cover.

A receiver handstamp, also on the back, indicates the cover arrived in Helsinki March 2, 11 days after it was mailed from Boston.

In the coming months, I will highlight the $2 and $5 Americana stamps.

Please feel free to share your stories and items dealing with U.S. dollar-denominated commemorative and definitive stamps. Write to Dollar-Sign Stamps, Box 4129, Sidney, OH 45365-4129; or send an email to csnee@amosmedia.com.