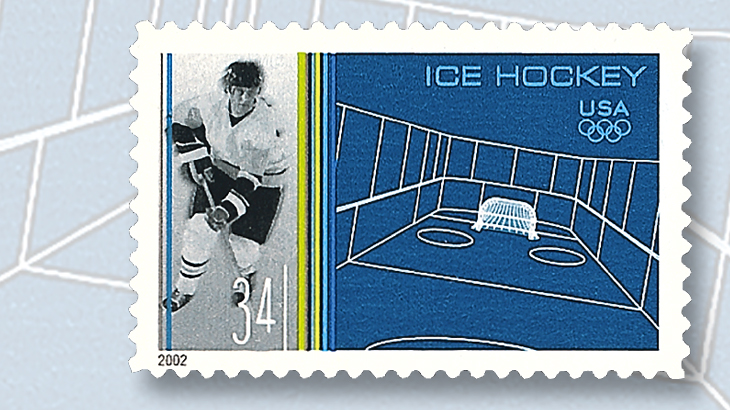 This 34¢ stamp is the most recent United States Ice Hockey stamp. It is from an Olympic Winter Games set of four issued in 2002. 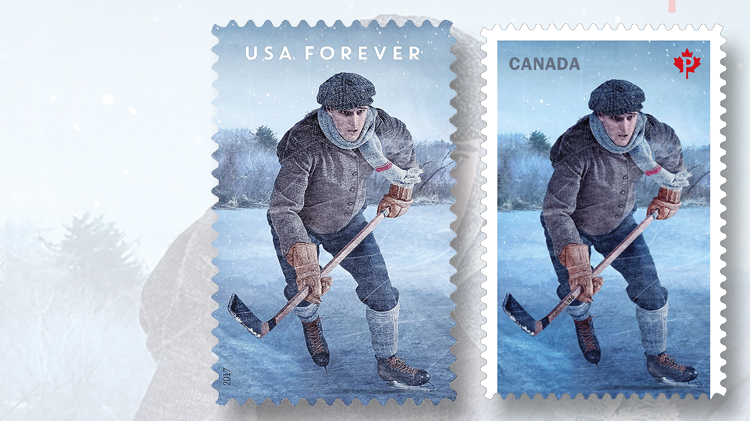 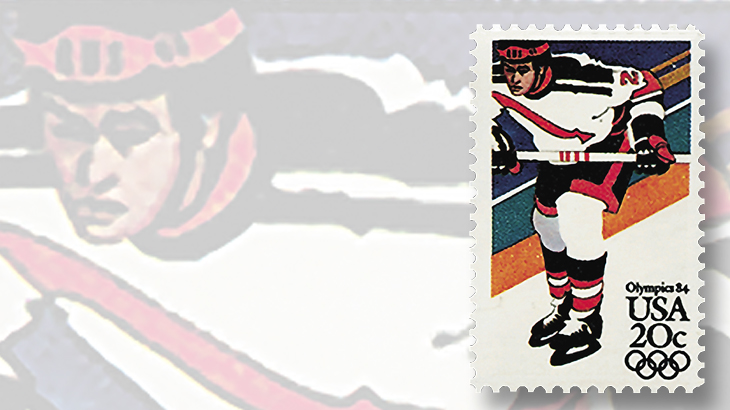 A 1984 stamp showing a hockey player, denominated 20¢, for the Olympic Winter Games in Sarajevo, Yugoslavia. 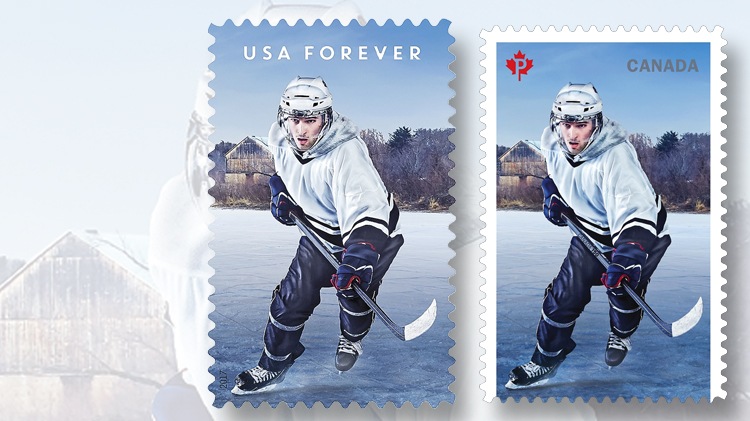 A joint stamp issue celebrating the history of hockey from Canada and the United States will be issued Oct. 20 in Detroit, Mich. These stamps show the matching designs for the first of two stamps for each country. 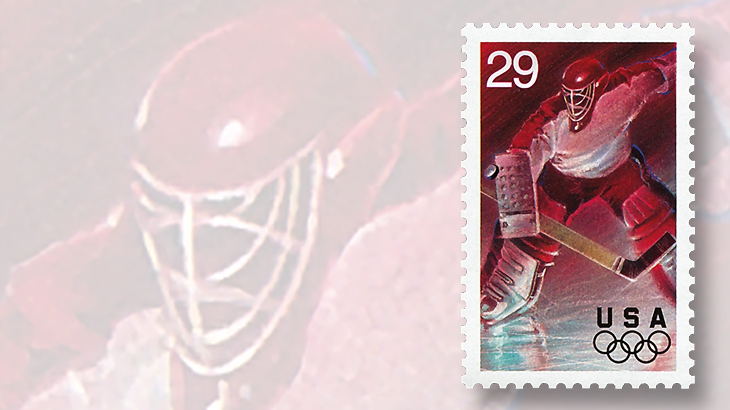 Ice Hockey was again profiled as a winter Olympic sport with this 29¢ stamp from a 1994 set of five. 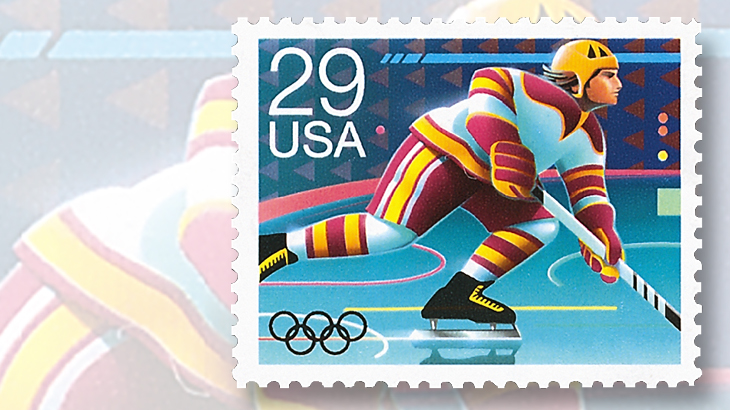 The set of five stamps prepared in advance of the 1992 Olympic Winter Games includes a 29¢ stamp showing a hockey player. 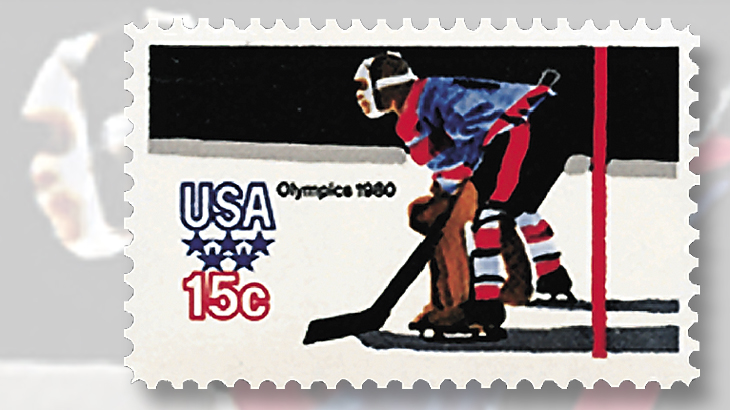 The first Ice Hockey issue from the United States was this 15¢ stamp issued in a set for the 1980 Olympic Winter Games.
Previous
Next

The United States Postal Service and Canada Post have revealed additional details of their joint stamp issue celebrating the history of ice hockey.

The neighboring nations have developed a pair of stamps that are similar in appearance, to be issued Oct. 20 with an 11 a.m. ceremony at Little Caesars Arena, 2645 Woodward Ave., in Detroit, Mich.

As reported in the Oct. 16 Linn’s Stamp News, USPS Postmaster General Megan Brennan and Canada Post President Deepak Chopra will participate in the event, which is free and open to the public.

Two stamp designs were revealed Oct. 5 that will both appear on stamps issued by each of the two countries.

As described by the U.S. Postal Service, one design shows a player in a contemporary uniform and using modern equipment, and the other is wearing vintage garb and using old-fashioned gear.

The nondenominated (49¢) U.S. forever stamps will be issued in two different formats: in a pane of 20, and in a souvenir sheet of two stamps.

Prerelease details from the Postal Service indicate the stamps are arranged tete-beche, with one stamp positioned upside down to mirror the image of the other.

In its Oct. 5 press release, Canada Post said the design arrangement is strong on nostalgia.

“On an open pond, a player in modern equipment reflects, literally, on the past. Mirrored in the ice beneath him is a player in vintage gear. The imaginative imagery gives a visual sense of looking back through time. “

Canada’s nondenominated (85¢) permanent-rate stamps will be issued in a booklet of 10 self-adhesive stamps, and a perforated gummed souvenir sheet of two.

The souvenir sheet designs were not revealed in the Oct. 5 announcement, but the U.S. Postal Service noted that it “features a scene that illustrates the evolution of the sport across generations. The selvage — or area outside of the stamps on the souvenir sheet — depicts a father teaching his daughter how to play hockey on a pond.”

The souvenir sheet designs will not be revealed before the stamps are issued Oct. 20, according to the USPS, though both postal authorities noted that “The History of Hockey” appears inscribed in the bottom left corner of the souvenir sheet under the flags of the United States and Canada.

The issue was designed by Subplot Design Inc., for Canada Post, using photographs by KC Armstrong of Toronto, Ontario, Canada.

Canada Post adds that a joint official first-day cover will be made available with two tete-beche pairs — one pair of the Canadian stamps and one pair of the U.S. stamps — struck with respective postmarks from Windsor, Ontario, and Detroit, Mich. The two neighboring locations are separated only by the Detroit River.

Canada Post calls the History of Hockey stamps the sixth joint issue developed in partnership with the United States.

The first came in 1959, to celebrate the opening of the St. Lawrence Seaway, with a shared design showing the Great Lakes with linked maple leaf and eagle emblems. The 4¢ U.S. stamp is Scott 1131, and the 5¢ Canada stamp is Scott 387.

The recognition of official joint issues can vary, depending upon the degree of cooperation between the issuing nations.

The new History of Hockey stamps are being issued at the beginning of the 2016-2017 National Hockey League season, and in commemoration of the 100th anniversary of the NHL, the top North American league of professional hockey teams, which was organized Nov. 26, 1917, in Montreal, Quebec.

As a team sport, ice hockey was developed in eastern Canada in the 19th century, presumably as a winter variation of outdoor games played with balls and sticks in fields and on streets.

In its present form, hockey pits two teams of skaters against each other on a field or rink of ice, using curved sticks to drive the disc-like hockey puck into an opposing goal, guarded by a player designated as the goalie.

The International Ice Hockey Federation credits James G. Creighton of Nova Scotia as instrumental in organizing the sport and developing the rules.

The first organized hockey team was established in 1877 at McGill University in Montreal, according to the federation, with the game soon spreading to Europe.

“By the late 19th century, the game had grown popular in the United States,” the U.S. Postal Service reports. “American Malcolm Greene Chace became interested in the game and assembled a group of players from various universities.

Seven of the 31 NHL teams competing today are based in Canada, with the rest in the United States. Indoor rinks make it possible to enjoy hockey in any environment, and NHL teams are based in locations such as Glendale, Ariz., and metropolitan Miami, Fla.

Hockey is also a recognized Winter Olympic sport, with U.S. participation in the form of the U.S. men’s national ice hockey team.

At the 1980 Olympic Winter Games in Lake Placid, N.Y., the men’s team defeated a powerful and heavily favored Soviet Union team in a historic game known as the “miracle on ice.” The U.S. team, which previously won gold in the 1960 Games, went on to take the gold medal in the 1980 Games with a 4-2 defeat of Finland.

Canada issued its first ice hockey stamp in 1956, a 5¢ ultramarine commemorative showing three identified players in a game (Scott 359). Canada has issued a large number of hockey stamps over the years, including many honoring individual professional players.

The United States has issued five previous stamps with an ice hockey theme since the first in 1980, a 15¢ Olympic Winter Games issue showing a goalie (Scott 1798 and a perforation variety, 1798A).

Technical details and first-day cancel ordering information were not released by the Postal Service at press time; they will be published by Linn’s in a future issue.