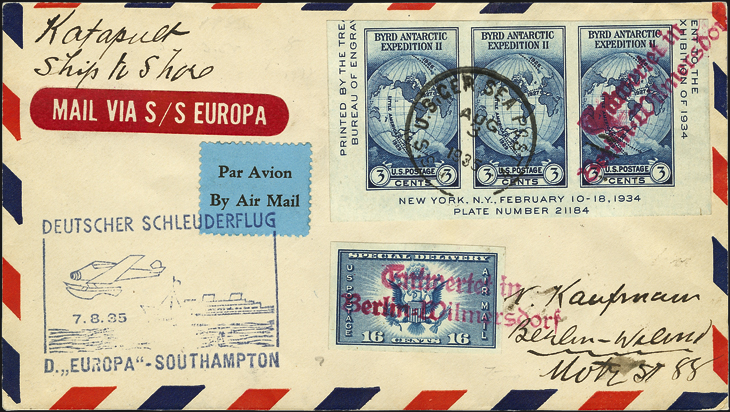 This attractive red, white, and blue cover was delivered to Southampton, England, from the SS Europa by a catapulted plane at least a day before the ship docked. The airmail special delivery stamp was improperly used because special delivery was not reque

What is it about a cover that screams “Buy me!”?

I don’t collect catapult mail, nor do I have any special passion for airmail special delivery stamps, but for no explainable reason I had to have the cover shown nearby.

Maybe it was the red, white, and blue colors? Or was it the German handstamps on the uncanceled stamps? Perhaps it was the odd franking including half of the Byrd Antarctic souvenir sheet (Scott 735)? Or maybe it is just the overall impression?

Whatever it was that screamed “buy me,” I couldn’t resist.

On this cover, 25¢ in postage paid the ½-ounce SS Europa catapult rate to Southampton, England, and onward to Germany.

The German marking “Entwertet in Berlin-Wilmersdorf” means “canceled” and was used to cancel the stamps that had not been canceled when the cover was mailed on Aug. 3, 1935.

Now my problem is where to put the cover in my collection, because it does not fit any specific category.