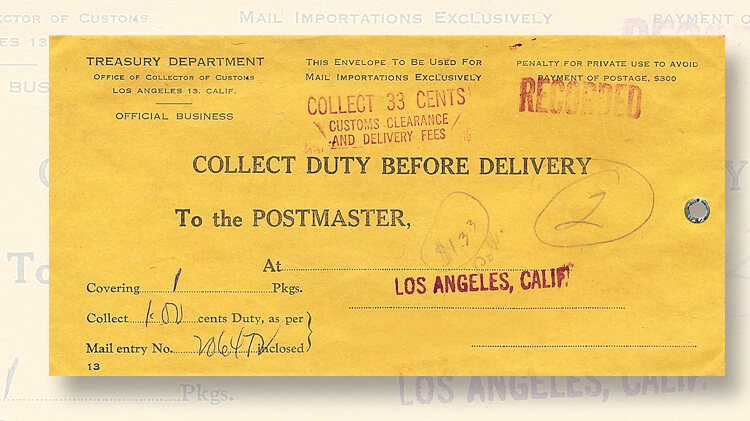 Also undated, this Treasury Department, Bureau of Customs, official-business envelope has markings indicating that 33¢ in collection and delivery fees plus $1 in customs duty were paid on a parcel. 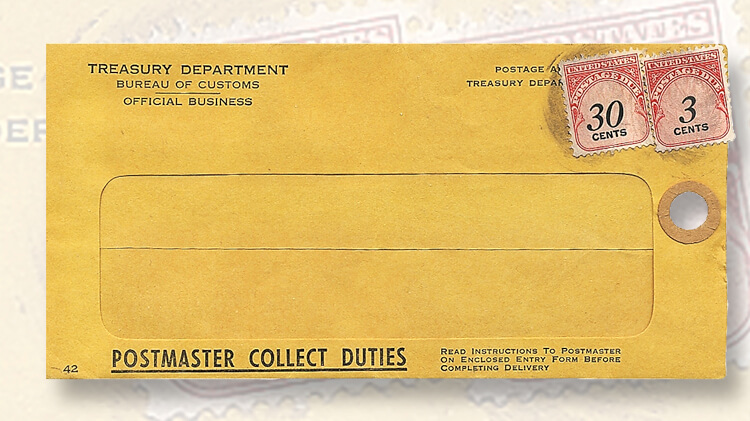 This undated Treasury Department, Bureau of Customs, official-business envelope has 33¢ in postage due stamps affixed, to account for the collection and delivery fees. This amount indicates the item dates from the May 15, 1957, to Jan. 14, 1968, postal regulations period.
Previous
Next

This column for the Linn’s issue of April 14, 2008, presented a discussion of customs clearance and delivery fees and custom duties for a July 6, 1971, parcel item.

That column offered a fairly detailed description of the process for handling the fees in question, and I mentioned that, in my experience, examples of such after mid-1950 were very uncommon.

I still feel that this is true, but I now do have two examples of the 33¢ collection and delivery fees, and present them here.

In the first illustration is an undated Treasury Department, Bureau of Customs, official-business envelope with 33¢ in postage due stamps on it (the 3¢ Scott J91 and the 30¢ J98, both issued June 19, 1959).

In the International Mail Transmittal Letter 38 (March 8, 1961), we find: “Post offices will collect the fee of 33 cents from the addressee of every parcel post package on which customs duty or internal revenue tax is collected. … The fee is retained by the Postal Service, and is accounted for by affixing postage-due stamps to the parcel or to a postage-due bill and canceling.”

On the item in the first illustration, the postage due stamps that indicated the payment of the fee by the addressee were not placed in the correct location.

In the second illustration we have another undated and somewhat different example of a Treasury Department, Bureau of Customs, official-business envelope indicating the collection of the 33¢ collection and delivery fees. This envelope includes the “Mail entry No.” that was used to label and identify the incoming package.

The duty amount of $1 and the total amount of $1.33 due from the Los Angeles, Calif., addressee also were listed on this envelope.

The 33¢ in postage due stamps indicating the fee retained by the Postal Service presumably were placed correctly on the parcel or on a postage-due bill.