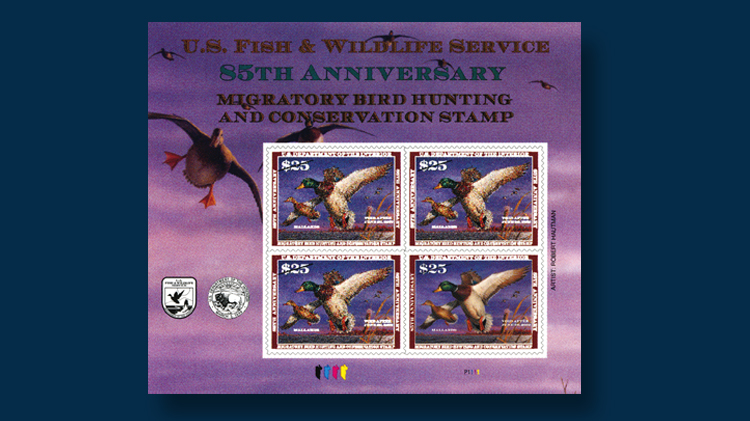 The U.S. Fish and Wildlife Service is issuing a small pane of four $25 stamps to commemorate the 85th anniversary of the migratory bird hunting and conservation stamp. The pane was illustrated in the Summer 2018 USA Philatelic, the U.S. Postal Service stamp product catalog published in early June. 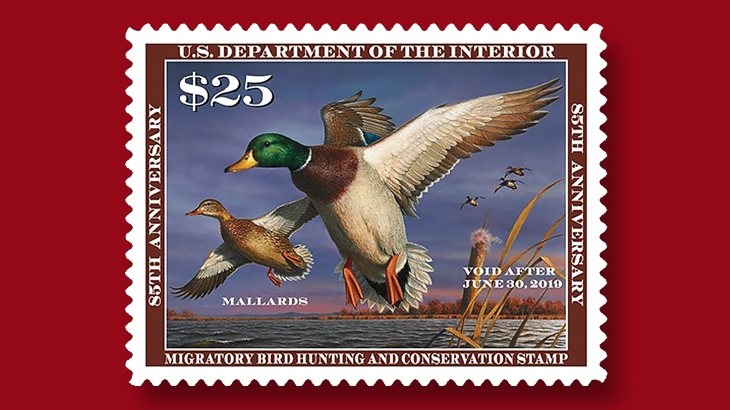 The $25 Mallards federal duck stamp will be issued June 29 in three different formats. All three varieties will be self-adhesive. The stamp artwork shows a painting by Robert Hautman. 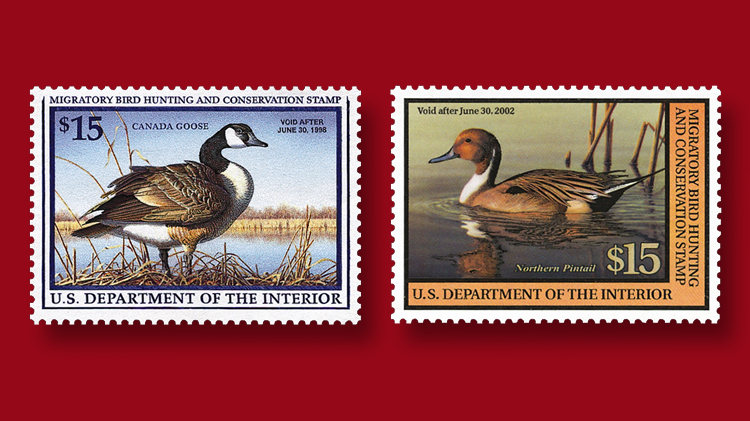 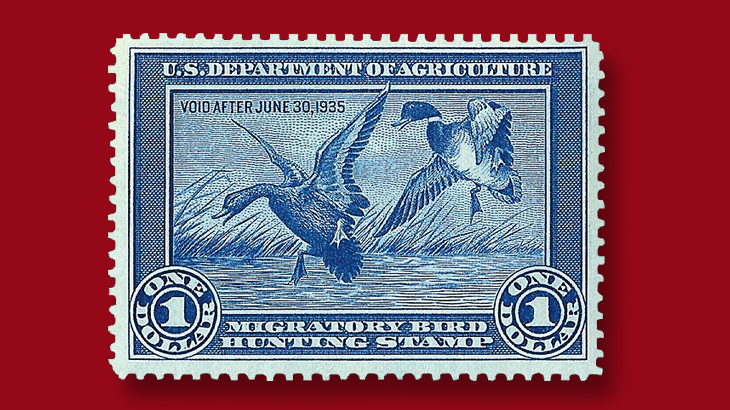 Mallards alighting was the subject of the first federal duck stamp issued in 1934 with artwork by conservationist and artist Jay N. “Ding” Darling, who helped develop the federal program.
Previous
Next

The United States $25 federal duck stamp for 2018-19 will be issued June 29, and for the first time in the conservation program’s 85-year history there will be no perforated stamp with moisture-activated adhesive.

The stamp is being offered only in self-adhesive formats: as a pane of one stamp, in a pane of four described as an 85th anniversary commemorative souvenir sheet, and in a pane of 20.

The change to self-adhesive stamps was forced by circumstances, according to Rachel Fisk Levin of the U.S. Fish and Wildlife Migratory Bird Program.

“Due to changes in technology and in the availability of printing material, the water-activated glue format … has been discontinued beginning with the 2018-2019 stamp,” Levin told Linn’s Stamp News.

“With the advent of the pressure-sensitive adhesive (PSA) format duck stamp in 1998 and the E-Stamp and automated distribution in 2005, the PSA is the primary format of the Federal Duck Stamp now being sold.

“The security paper and dyes used in the production of the WAG [water-activated gum] format stamp are specialty items and are not available in the U.S. due to environmental hazards associated with the paper production. Therefore the specialty printers able to print Duck Stamps can no longer obtain the paper required for WAG stamps.

“While we recognize that the traditional WAG format is appreciated by many stamp collectors, it is not possible to produce this format any longer,” Levin said.

She added that the Fish and Wildlife Service is working within policies and regulations “to explore options that will provide stamp collectors and other user groups with the stamp quality and products they desire.”

Because the stamps are all being printed and processed by Ashton Potter USA Ltd., the Williamsville, N.Y., firm that is also a USPS contract printer, it is possible the individual stamp varieties will be indistinguishable.

The new stamp reproduces an acrylic painting of mallards by Minnesota artist Robert Hautman. The painting shows a mallard drake and hen coming in for a landing on a body of water, with cattails in the lower right corner. Three additional birds in flight are visible in the background.

This will be the third federal duck stamp to feature artwork by Hautman. His work was shown previously on the 1997 $15 Canada Goose stamp (Scott RW64) and the 2001 $15 Northern Pintail stamp (RW68-RW68A).

Hautman is expected to participate in the June 29 first-day ceremony for the new stamp taking place at 11 a.m. at Bass Pro Shops Retail World, 7000 Arundel Mills Circle, Hanover, Md. The ceremony is free and open to the public.

At the same event, the U.S. Fish and Wildlife Service will issue the $5 junior duck stamp for 2018-19, which reproduces an acrylic painting of an emperor goose by artist Rayen Kang of Georgia. Kang is also expected to attend the ceremony in Maryland.

Hautman is one of three brothers who have all become leading names in the field of wildlife art.

The finished design of the new stamp with Robert Hautman’s artwork was revealed in the May 24 USPS Postal Bulletin. Although the stamps are issued by the U.S. Fish and Wildlife Service of the Department of the Interior, the Postal Service has been a partner in federal duck stamp sales for many years, offering stamps at local post offices and through its online retail site.

Some post offices will carry the federal duck stamp in the single-stamp pane. According to information in the Postal Bulletin, the pane of four and the pane of 20 will be distributed to Stamp Fulfillment Services in Kansas City, Mo.

The three varieties will each be offered in larger press sheets as well.

Although not valid for postage, the federal duck stamp, also known as the migratory bird hunting and conservation stamp, is a popular collectible, illustrated and listed as “hunting permit stamps” in the Scott Specialized Catalogue of United States Stamps and Covers and in Vol. 1A of the Scott Standard Postage Stamp Catalogue.

Mallards alighting was also the subject of the first federal duck stamp issued in 1934. The illustration was by Jay Norwood “Ding” Darling, an artist and conservationist who helped develop the Duck Stamp Act of 1934 under President Franklin D. Roosevelt. The $1 blue stamp issued that year (Scott RW1) features a line engraving of Darling’s artwork.

Since 1949, the artwork for the federal duck stamp has been chosen in a juried competition, originally in Washington, D.C., but now held at a different location each year and open to the public.

Because an artist is prohibited from entering if he has won the contest during the preceding three years, none of the three Hautman brothers will be eligible to enter the upcoming competition for the 2019 federal duck stamp.

That contest will take place at the Springs Preserve in Las Vegas, Nev. Entries are due Aug. 15. Rules and entry information can be found online.

The funds collected from sales of the stamps raise about $40 million each year to conserve and protect wetland habitats in the National Wildlife Refuge System, according to the Fish and Wildlife Service.