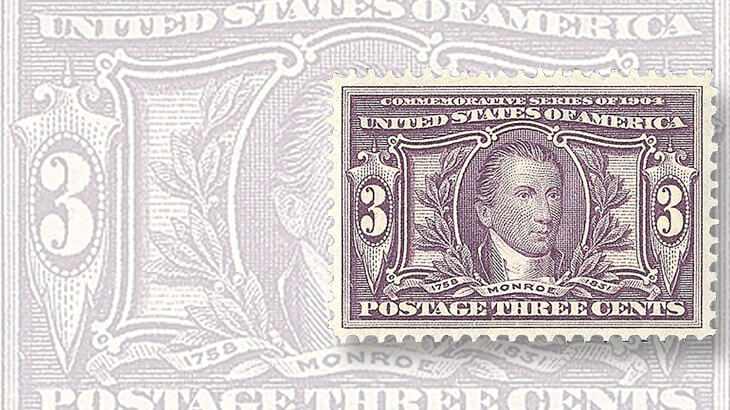 The 1904 United States 3¢ James Monroe stamp from the Louisiana Purchase Exposition issue (Scott 325) is a good buy in mint never-hinged condition at around $150.

Two hundred years ago, 1816 was also a presidential election year. The Democratic-Republicans nominated Virginia native James Monroe, who had served as secretary of state for outgoing two-term incumbent James Madison.

The Federalist Party, already in its death throes, nominated Sen. Rufus King of New York. Monroe, a Founding Father of the republic, won in a landslide with 68 percent of the popular vote, carrying 16 states for a 183-to-34 majority in the Electoral College. King carried only Delaware, Connecticut, and Massachusetts.

Monroe proved a good, if not great president: buying Florida from Spain, promulgating the Monroe Doctrine (conceived by his secretary of state, John Quincy Adams) to end European colonization attempts in the Americas, and weathering the Panic of 1819 to be overwhelmingly re-elected in 1820.

As a journeyman chief executive, he is rarely numbered among our greatest presidents. Indeed, his first appearance on a U.S. postage stamp recognized his role in negotiating the Louisiana Purchase from France rather than his service as president.