Two forever stamps issued in 2012 commemorate the 1912 gift of cherry trees from Japan to the United States. Artist Paul Rogers created the illustration. 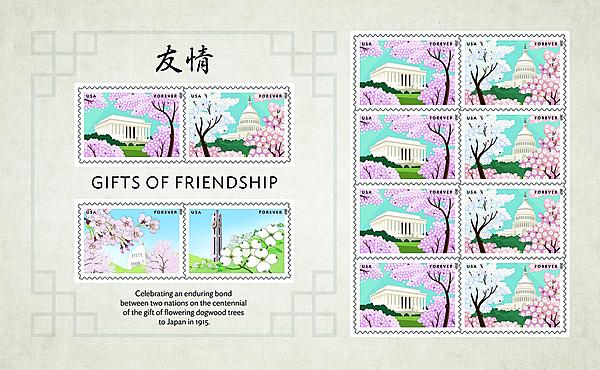 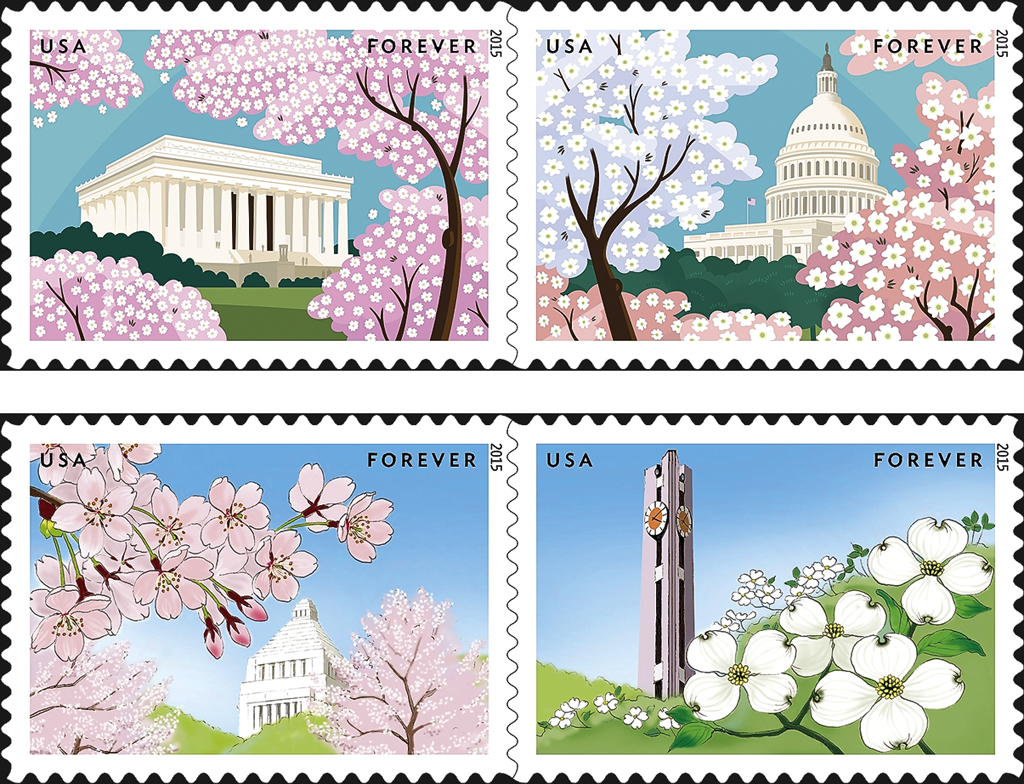 Four different U.S. Gifts of Friendship forever stamps will be issued April 10 with a first-day ceremony in Washington, D.C. The stamps are being issued in panes of 12.

The United States Postal Service and Japan Post will offer a joint issue on April 10 to commemorate a gift of flowering trees from 100 years ago.

If this all sounds familiar, it should. Three years ago, the same two nations issued stamps to mark the centennial of Japan’s 1912 gift of blossoming cherry trees to the United States.

The new set marks the 100th anniversary of the return gift that the United States presented Japan in 1915: blossoming dogwood trees. The stamps, which will be issued in Washington, D.C., might prove to be every bit as popular as the earlier issue, because the scenes on two stamps are again created by artist Paul Rogers. This time, however, there are four designs, with the other two created by Japanese artist Junko Kaifuchi.

Even though two artists worked on illustrating the issue, the stamps share similar design characteristics and complement each other nicely.

The pane of 12 forever stamps consists of 10 stamps using Rogers’ illustration, and two using the illustrations by Kaifuchi.

The stamps by Kaifuchi show cherry blossoms with the National Diet Building, and white dogwood blossoms with the clock tower in the north garden of the Parliamentary Museum (Kenseikinenkan). Both structures are in Tokyo.

The 2012 stamps showed cherry blossoms with the Washington Monument on one stamp, and the Jefferson Memorial on the other.

The new stamp pane includes eight stamps on the right side. On the left side are Japanese script characters reading “friendship” at top, above two stamps using Rogers’ illustration. Below that is the phrase “GIFTS OF FRIENDSHIP” in English, the two stamps illustrated by Kaifuchi, and additional text: “Celebrating an enduring bond between two nations on the centennial of the gift of flowering dogwood trees to Japan in 1915.”

The issue was designed by USPS art director William J. Gicker and offset-printed by Ashton Potter.

Press sheets, both with and without the die cuts that separate individual stamps, will be sold for $35.28 (72 stamps, six panes per sheet).

The first-day ceremony is scheduled to take place at 11 a.m., at the Tidal Basin Paddle Boats, 1501 Maine Ave. SW, in Washington, D.C., according to a March 19 posting on the Postal Service’s Facebook page. No other details about the event have been made available.

The Postal Service’s set of four uncacheted first-day covers for the Gifts of Friendship stamps is item 489816 at $3.72. USPS order numbers for stamps and FDCs also appear in Linn’s 2015 U.S. Stamp Program.