U.S. revenue stamps are fun — and so are the people who collect them 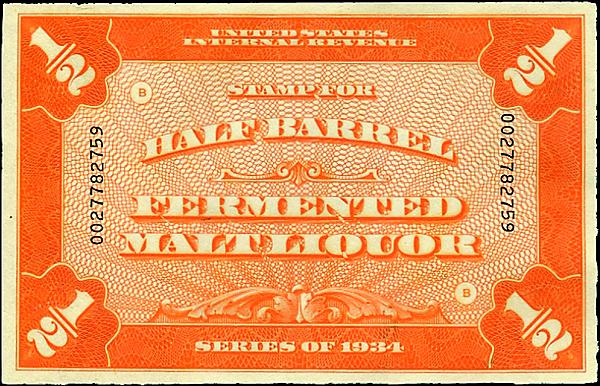 The discovery of a malt liquor revenue stamp in an album helped spark the author’s interest in revenue stamps. 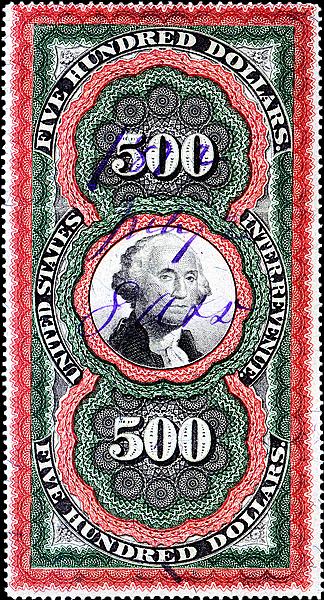 The $500 red orange, green and black second issue documentary stamp of 1871 is known to collectors as the Persian Rug.

A question I am frequently asked is how and why did I get interested in revenue stamps.

The answer is simple.

United States revenue stamps are a fascinating field to collect, study and deal in. Revenue stamps tell the history of our country and, in fact, the birth of the United States came about because of revenue stamps. The saying “no taxation without representation” was in response to the British Stamp Act of 1765, which imposed stamp taxes on the colonies in America and led to the American Revolution.

The War of 1812, the Civil War, the Spanish American War, World War I and World War II all resulted in taxes, and revenue stamps were issued to help pay for the wars.

Revenue stamps have also been issued in attempts to make our lives safer and to affect behavior.

Examples include stamps for oleomargarine, filled cheese, mixed flour, renovated butter, narcotics and many other items.

Social engineering has also been a factor. Some of the rarest beer revenue stamps were issued at the very end of Prohibition.

Revenue stamps are some of the most beautiful stamps ever issued. Think of the 1871 Persian Rugs — those large, ornate and colorful second issue documentary stamps — or the Series of 1871 beer stamps.

But perhaps the most important reason is that revenue stamps, and the people who collect them, are fun.

So now, you might wonder, how did I get started in revenue stamps?

The first U.S. Christmas stamp, the 4¢ Wreath and Candles (Scott 1205), was issued in 1962 and it was big news. That caught my attention, and I started collecting the stamps from our mail.

A trip to visit my grandparents for Christmas brought me my first foreign stamp, a 1-peseta orange Gen. Francisco Franco stamp from Spain (Scott 825) on a Christmas card they received from a friend.

Soon thereafter, my dad gave me his childhood collection. It was in an old red Modern Stamp Album that is still common today.

It was full of treasures from all over the world, but the most unusual item in the album was a large orange stamp for one-half barrel of fermented malt liquor from the Series of 1934.

It was my first revenue stamp.

My dad is a coin collector and I started attending the Long Beach Stamp and Coin Show with him. Those were the days when the show was held in old Long Beach Auditorium. The stamp dealers were upstairs and the coin dealers were downstairs.

I always had a few dollars saved from odd jobs that I would use to add stamps to my collection. When I was perhaps 13 years old, I found a dealer at the show who had a cigar box packed full of revenue stamps that he would sell me for $10. I had the money, but he wouldn’t sell it to me until my dad said it was OK. I brought him over to the dealer, who proceeded to tell my dad that the cigar box contained revenue stamps and that nobody really cared about them and that is why he wanted his permission before selling it to me. My dad told the dealer that revenues is what I liked and it was OK to sell them to me.

Today, the contents of that cigar box would be worth thousands of dollars.

I got my driver’s license in 1971, and shortly thereafter I learned about a revenue stamp club that met at the Los Angeles Philatelic Society on Alvarado Street in downtown Los Angeles.

It was at those meetings that I met some important revenue collectors, such as Charles H. Hermann, Abe Hochman, Ogden Scoville, Frank Q. Newton Jr., and Bert Hubbard.

I also met Sherwood Springer, a dealer specializing in revenue, telegraph, local post and cinderella stamps. He was also the editor of Springer’s Handbook of North American Cinderella Stamps Including Taxpaid Revenues. Those were fascinating times and I learned a lot at those meetings.

During my last year in high school, at one of the meetings, Ogden asked what my plans were after graduation. I replied that I was going to attend college, but that I would really like become a full-time stamp dealer. That caught Sherwood’s attention and he asked, “What do you plan to deal in?”

You had to know Sherwood to really get the flavor of his response when he said, “Why that’s crrraaaaaazzzzzy — you can’t earn a living dealing in revenue stamps!”

From that point forward, Sherwood became one of my best friends and a mentor in the stamp business. He was free with his knowledge and advice and was very important to me in my formative years as a stamp dealer. We kept in touch on a regular basis over the years and he was amazed at what I had accomplished and what happened with revenue stamps during that time.

A lot of it had to do with revenue stamps coming of age, but the literature and the people involved also played a big part.

Sadly, Sherwood passed away in 2000 at 88 years young. There was a note to his wife tacked to the wall by the light switch in his office that read, “Lydia, when I am gone, call Eric Jackson and tell him to come take my stamps out of here before the tax men and the lawyers get here.”

That note had been on the wall for about 25 years, as it started with my California telephone number, then was updated to my Virginia and Pennsylvania phone numbers as I moved.

I saved that note and occasionally I come across it. It brings back a lot of good memories.

Eric Jackson has been buying and selling revenue stamps since 1970. He operates Eric Jackson Revenue Stamps in Leesport, Pa.

The author can be contacted at eric@revenuer.com, or via his website, www.EricJackson.com.