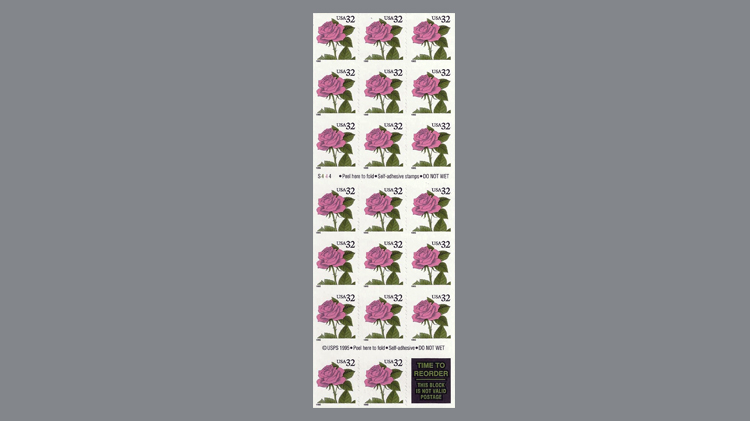 A newly authenticated United States stamp error has surfaced on the 32¢ Pink Rose stamp in a pane of 20. All horizontal die cuts are missing from the pane. Two error panes were purchased in an Ohio post office shortly after the stamp was issued in 1995.

A stamp collector’s find from 1995 has been authenticated in 2017 as a previously unreported error.

More than 20 years ago, Ron DeLaney walked into an Ohio post office and bought four panes of 20 of the 32¢ pink, green and black Pink Rose stamp.

The 32¢ self-adhesive Pink Rose stamp with wavy line die cutting simulating perforations was issued June 2, 1995, in a flat pane of 20 stamps with a reordering label (Scott 2492a). The normal pane could be folded into a booklet shape for convenience after removing two horizontal imprinted peel-off strips.

DeLaney intended to use two of the panes he purchased for postage and add two panes to his collection.

However, when he checked the panes after returning home, he discovered that while two of them appeared normal, the other two seemed to be missing all of the horizontal die cuts that separate the individual stamps at top and bottom.

He set the stamps aside and watched to see if any errors of that sort were reported in Linn’s Stamp News or listed in the Scott catalogs.

No similar error was ever reported on the Pink Rose issue.

“Probably last spring I opened the drawer and there they were,” he told Linn’s in late November. “I started looking at them a lot closer, and I had enough strong lighting where I had every indication that there were no [horizontal] die cuts.”

At that point, he submitted the stamps to the American Philatelic Society stamp expertization service (APEX) in Bellefonte, Pa. After the examination was completed, the stamps came back with a certificate identifying the error.

With the certification provided by DeLaney and verified with APEX, the Scott catalog editors intend to add the new error to Vol. 1A of the 2019 Scott Standard Postage Stamp Catalogue as Scott 2492k, according to the catalog’s managing editor Charles Snee.

DeLaney, a lifelong stamp collector, has both panes stored in a safety deposit box. He currently plans to keep at least one, and is considering whether or not he’ll consign the other to auction.

The 32¢ Pink Rose stamp, part of the Flora and Fauna definitive series, was available from post offices during much of the 32¢ first-class letter-rate period that began Jan. 1, 1995, and continued until Jan. 10, 1999, when the rate increased to 33¢.

During that time, the Pink Rose stamps went to press with plate numbers S111, S112, S333, S444 and S555. The prefix “S” in the plate number identifies the stamp-printing contractor, Stamp Venturers of Richmond, Va. The panes were processed by Stamp Venturers in Milwaukee, Wis.

DeLaney’s error panes show plate No. S444 printed on the selvage strip directly below the top nine stamps on the pane.

Although this is the first report of horizontal die cuts fully absent on the 20-stamp pane of the Pink Rose stamp, a few other Pink Rose errors were reported in 1996 and are listed in the Scott catalog.

One miscut pane of 20 is known with one row of vertical die cuts absent, resulting in six imperf-between horizontal pairs, plus a horizontal pair consisting of one stamp at left and the reorder label at right (Scott 2492i).

On another pane, part of the top layer of stamp paper was torn away prior to printing, resulting in a pane where two entire stamps and parts of others were printed on the pane’s liner (Scott 2492d).

Additional booklet varieties of the 32¢ Pink Rose stamp are known, including a folded booklet issued in 1996 with panes of 15 32¢ stamps and a label.