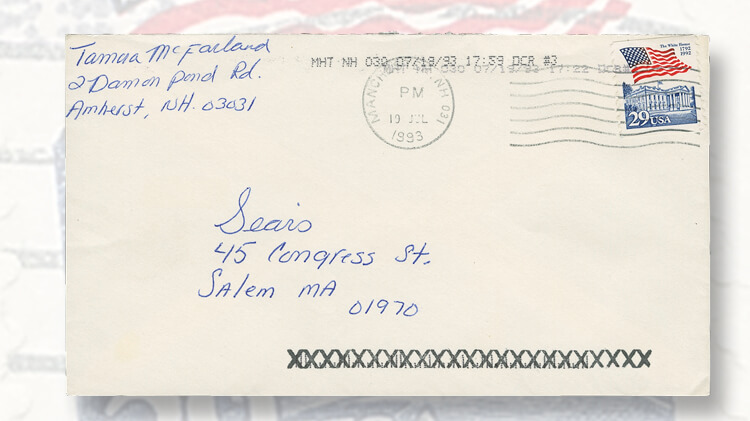 This bar code blocker uses X's to prevent undeliverable mail from being looped back to the wrong address. More than 50 such markings are known that were in use between 1988 and 1999. 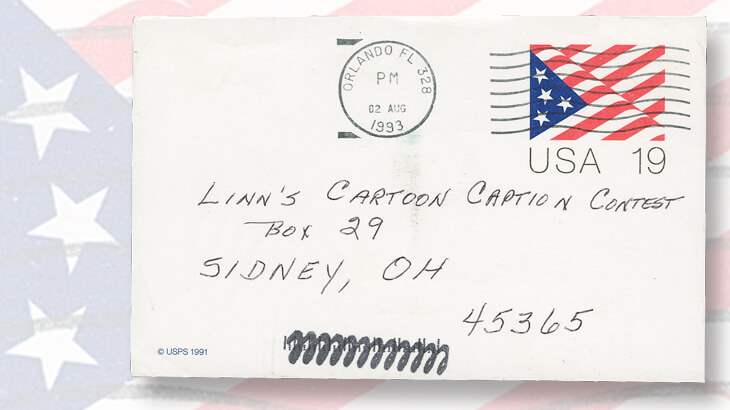 A squiggly line is the product of one bar code blocker that prevented undeliverable mail from being looped back to the wrong address. More than 50 such markings are known that were in use between 1988 and 1999. 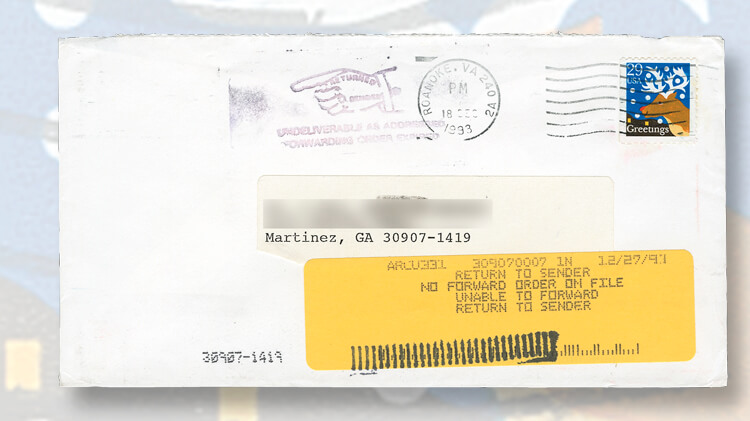 Bar code blockers were replaced by computer-printed yellow labels as shown here, beginning in 1996. This example has both a yellow label and a bar code blocker blocking the ZIP code on the label. Why? The author’s guess is because the computer had picked 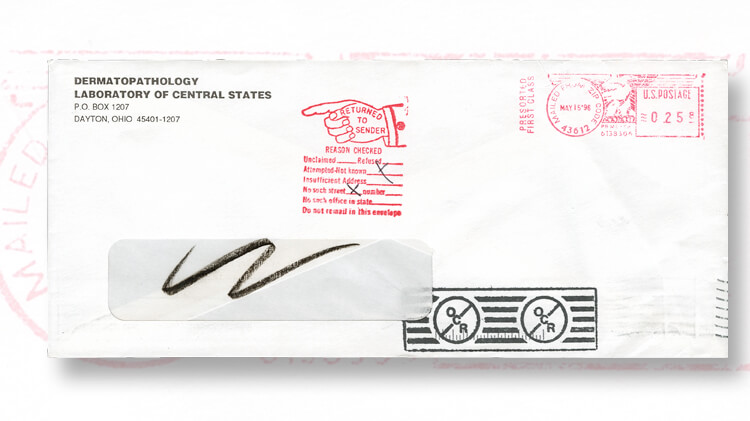 An example of the bar code blockers that were created to prevent undeliverable mail from being looped back to the wrong address. More than 50 such markings are known that were in use between 1988 and 1999.
Previous
Next

Mistakes happen, and when they do, there must be some way to eliminate them or at least reduce their impact.

One pile of covers I’ve accumulated provides a good postal example of this rule.

This process also checked the ZIP code that was detected against computer directories, and then sprayed a 32-bar (five-digit ZIP), 37-bar (the last six digits of a ZIP+4) or 52-bar (full ZIP+4) code onto the lower part of the address side of the envelope, below the written address.

This was done at the rate of 10 envelopes per second. The benefit was that mail sorting could be done faster and with greater accuracy by automated equipment rather than by hand, thus speeding the mail at less cost.

The first generation OCR readers were installed in Chicago, then later in Denver and Dallas.

In 1988, widespread installation of multiline OCR readers began. They read not only the ZIP code but the entire address block. They then compared the information with the ZIP code provided by the letter writer and the ZIP directory in the computer, and printed an OCR ZIP+4 in most cases, whether the sender had provided the +4 or not.

But what happened in those instances where the Postal Service’s computer malfunctioned and printed an incorrect bar code? Or mail as addressed had the correct OCR ZIP code but could not be delivered?

Somehow the OCR-printed ZIP code had to be invalidated so the envelope would not be put back into the mailstream and directed again to the wrong or undeliverable address (known as “loop mail”) instead of being returned to the sender or sent for directory assistance.

It would appear that each post office obtained its own version of the bar code blockers locally, because there are many varieties. I have or know of more than 50. Most are black, but some are in purple; and red is known. A selection is shown nearby.

Over time, the  bar code blockers were replaced by computer-printed yellow labels that included the ZIP code for return. An example of a cover with both the old and new systems is shown.

I would be interested in reports of examples with earlier or later dates. If you have one of these, please contact me, John Hotchner, at jmhstamp@verizon.net, or at Box 1125, Falls Church, VA 22041-0125.

Some time in the future, I plan to include an update in this column and will credit all who participate in establishing new start and end dates.

I am indebted to Wayne Youngblood and Douglas Quine, both of whom have written on this subject in the past and helped me understand the progress of mechanization in the USPS.