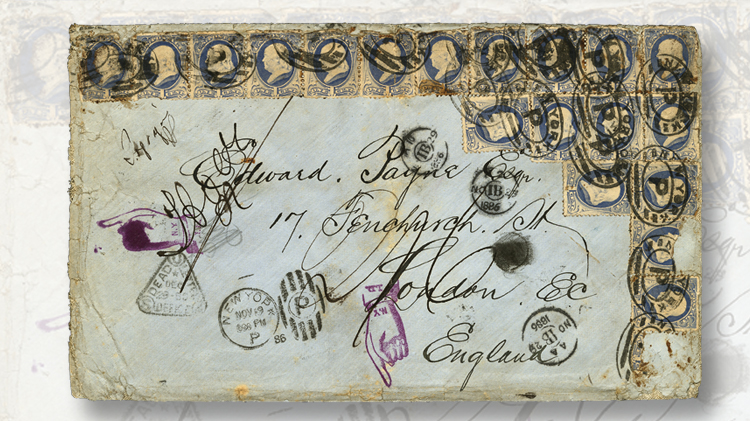 This magnificent cover with 20 examples of the 1881 version of the 1¢ Franklin stamp was sent to England, shortpaid, in 1886. The addressee refused to pay the postage due, and the cover was returned to the sender undelivered. 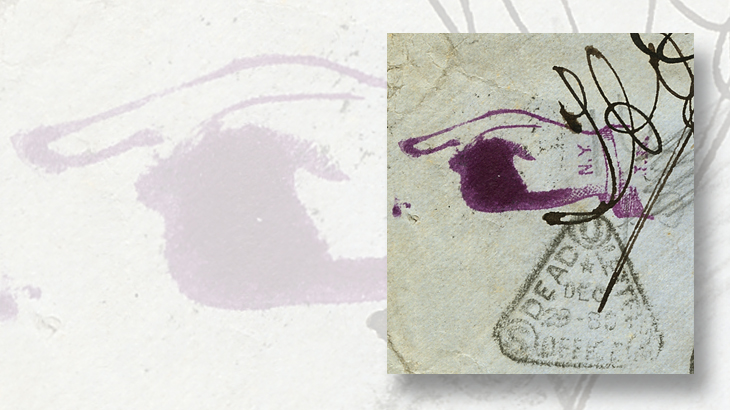 The triangular Dead Lead Office marking from the front of the cover. 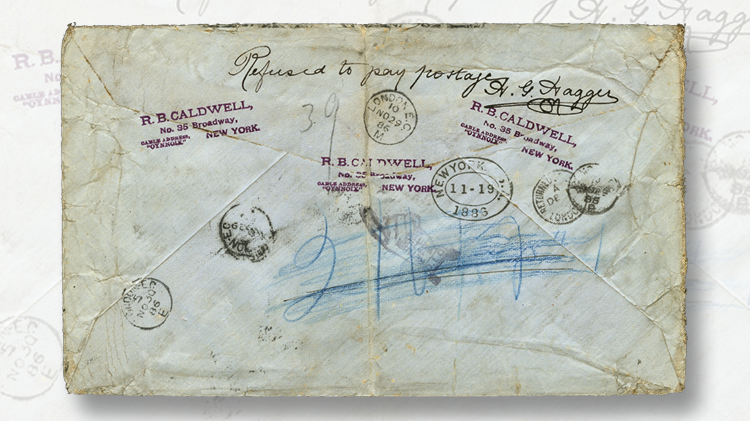 Among the markings on the reverse of the large cover sent from New York to England is the handwritten “Refused to pay postage,” written on the flap.
Previous
Next

A worthy challenge is to find covers with multiples of a stamp being used to pay a genuine rate, and I look especially for covers with five or more examples of the same stamp.

Among the most unusual that I’ve seen is the oversize cover shown nearby. This cover, measuring 6 inches by 10 inches, began its life with 20 examples of Scott 206, the 1881 version of the then- current 1¢ Franklin stamp with dark upper corners.

The fact that one stamp is almost totally missing from the cover, and about 90-percent of the stamp in the lower right also is missing does not diminish its attractiveness in my eyes.

The cover was mailed from New York City to London, England, on Nov. 19, 1886, but the sender miscalculated the rate. Because of the weight of the envelope and its contents, the rate to be paid should have been the basic 5¢ international rate, times 10 for the weight, or 50¢.

Therefore, when the cover reached England, it was rated as postage due 2 shillings, 6 pence (30¢, doubled as a penalty).

Upon delivery on Nov. 29, the addressee refused to pay the postage due, and a handwritten notice on the reverse of the cover reads, “Refused to pay postage.”

The London post office sent the cover back to the United States in early December.

The triangular Dead Letter Office marking in the lower left corner of the cover indicates that the returned letter was received in Washington, D.C. It was then forwarded to New York for return to the sender.

There is no indication that the postage due was collected from the original sender.

Giving credit where due, this cover was reported by Linn’s reader Stephen Taylor, an American resident in England and a dealer in American postal history.