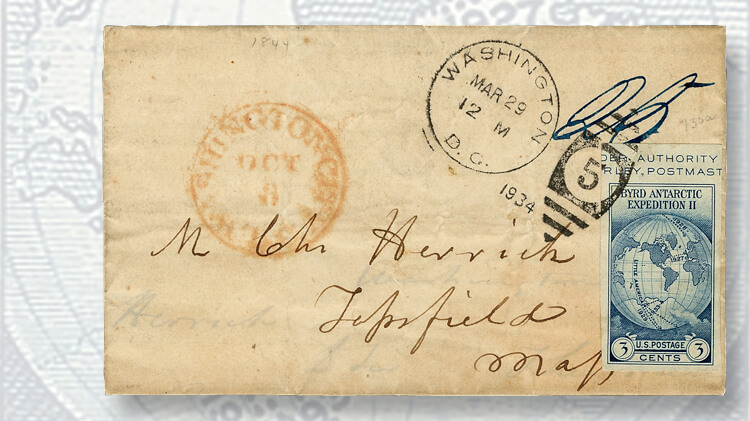 Two seemingly unconnected elements mark this cover as a curiosity: It’s an 1844 stampless cover with a 1934 Byrd Antarctic Expedition stamp added and favor canceled. Is there a connection to the 19th-century Wilkes Antarctic Expedition, or is this a rando

A combination cover, one from an earlier period to which a newer (and related) stamp has been attached and canceled, does not usually have a 90-year space between its first use and the addition of a new stamp. But the 1844 cover that was featured in this August 2014 U.S. Stamp Notes column is just such a case.

The answer that I think is mostly likely to be the correct one came from Hal Vogel, a scholar in polar philately.

Vogel said: “The add-on stamp is the imperforate variety of the stamp [issued in February, 1934] to be used primarily on mail from the 1933-35 Byrd Antarctic expedition. It also was acceptable for any valid U.S. postal use, but Antarctic expedition mail was its principal purpose for being.

“There was an earlier exploration just before the time of the 1844 cover. Though officially called the U.S. Exploring Expedition (1838-42), it mostly is known today as the ‘Wilkes Antarctic Expedition.’ It had many significant exploratory achievements, including the discovery of Antarctica as a continent and so naming it (1840).

“Several of the scientists on the Wilkes Antarctic Expedition were in communication with a scientist in New England named E.E. Herrick. Maybe ‘John Herrick,’ the addressee on the 1844 cover, also was involved or was a relative. Possibly in 1934 the defacer of the 1844 cover might have associated the addressee on this stampless mail with the USA’s first Antarctic Expedition and thought it would be neat to tie them together.”

If this is not the answer, we are left with the concept advanced by others that this was a random act of philatelic vandalism by a new collector who didn’t know what he was doing.