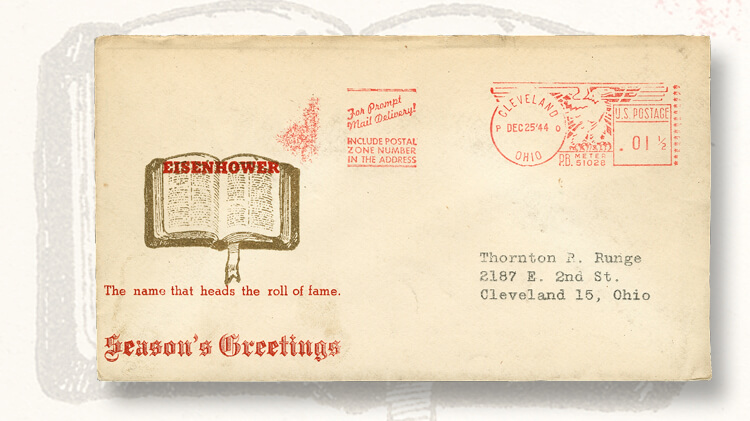 Mailed with the flap open, at the 1½¢ rate, this 1944 Christmas metered cover honors Gen. Dwight Eisenhower after the D-Day landings. By Christmas, it was understood that the ultimate defeat of Germany was only a matter of time.

Five-star Gen. Dwight D. Eisenhower would eventually become president of the United States (1953-1961), but in December of 1944 he was the commander of Allied forces proceeding toward ultimate victory over Germany, after the successful D-Day operation on June 6, 1944.

Widely hailed as the genius behind the expected Allied defeat of Hitler, Eisenhower was celebrated as a hero. Yet, despite all the detailed planning for the invasion of Europe, “Ike” as he was known, was not 100 percent certain of its success.

He even wrote a letter taking responsibility for the failure had Allied forces been repulsed by German forces in their attempt to establish a foothold on the beaches of Normandy.

Although United States, Canadian, and British forces suffered terrible losses, they gained the beachhead and began to move inland. The letter Eisenhower had written was not needed.

This was the beginning of the end for Germany, and few doubted the ultimate outcome would be the defeat of Germany. So, Christmas 1944 was less grim than the Christmases of 1941 to 1943. As the cover shown nearby testifies, Eisenhower was given a generous share of the credit.

The cachet on the cover shows the name “Eisenhower” heading the pages of a book, and below it are the words: “The name that heads the roll of fame. Season’s Greetings.”