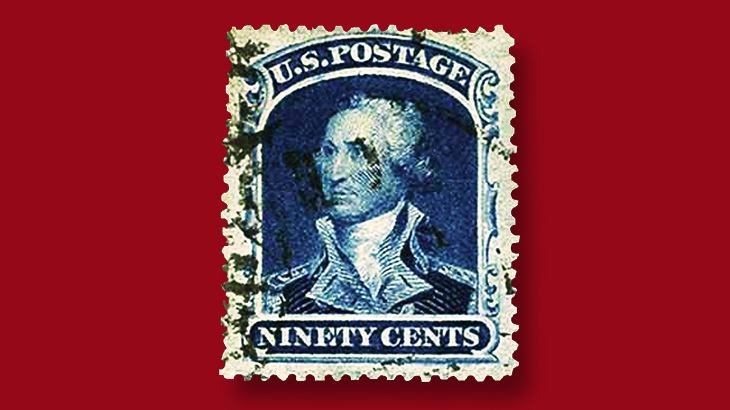 An uncommon find in genuine used condition, this United States 1860 90¢ blue George Washington stamp will be offered during the H.R. Harmer Oct. 25-27 auctions in California.

A specialized auction of the Bert Boonstra collection of the 1901 Pan-American Exposition is scheduled for Oct. 26.

Nearly 3,100 lots are offered over the course of the general sale, which opens with a selection of proofs and essays followed by U.S. 19th-century stamps and postal history.

The stamps in the auction include both unused and used. One standout is a used example of the 1860 90¢ blue George Washington (Scott 39).

The Scott Specialized Catalogue of United States Stamps and Covers notes that the 90¢ stamp is difficult to find with genuine cancels. It is valued at $10,000 in the Scott catalog, with that value listed in italics to identify a stamp that is a challenge to value accurately.

The example in the H.R. Harmer sale, which is ex-John R. Hill, is authenticated with three Philatelic Foundation certificates. H.R. Harmer describes it as having rich bold color and crisp impression, struck with several partial datestamps. The stamp is well centered with large margins and perfs intact, according to the auction description. Bidding opens at $8,000.

Stamps of the 1901 set are also featured used on covers to a large number of unusual destinations.

A nice find is a multicolor cover of the 2¢ Empire State Express with a Barry machine slogan cancel dated May 1, 1901, the first day of issue.

The lots can be viewed online, with online bidding options available.