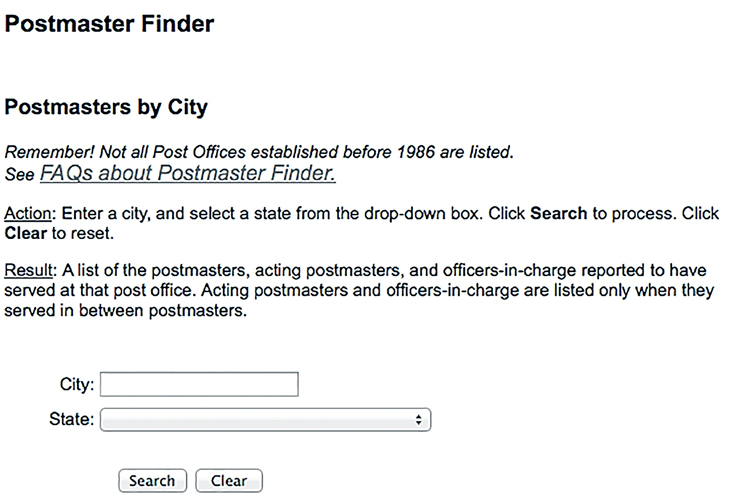 The data entry point of the United States Postal Service’s “Postmaster Finder” website is simple and straightforward. You enter the city name, and then find the state’s name in the drop-down box. 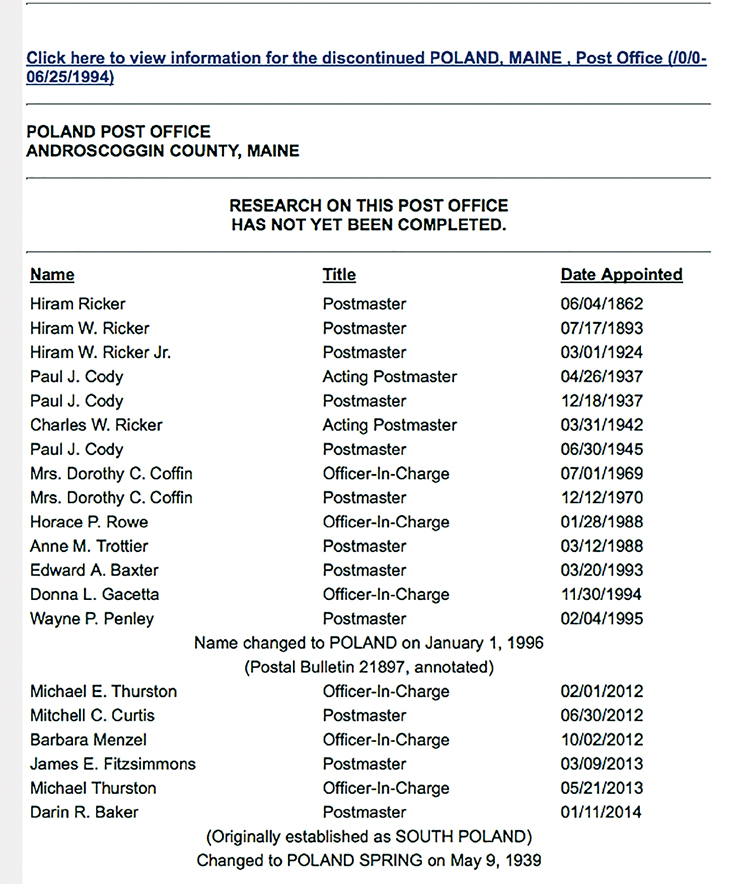 The search results for “Poland, Maine” on the United States Postal Service’s “Postmaster Finder” include postmaster names and useful information about name changes for this town.
Previous
Next

One of the most frequent reasons that people use my Postal Bulletin and Postal Laws and Regulations website is to locate the names of postmasters who served at a particular place.

Let me add that this website is available to anyone in the world, and its use is free of any charge.

Recently I was asked who was the postmaster of the post office at South Poland, Maine, an office supposedly established in 1862.

The Postal Bulletin, an official publication of the United States Post Office and its successor, the U.S. Postal Service, is a great source of information regarding when post offices were established and who the postmasters were for a particular post office over the years.

Unfortunately, while the Postal Bulletin is still published today, it was not published before 1880, and the post office and postmaster information published in the various issues is incomplete.

However, there is another resource for this information: the “Postmaster Finder” function of the USPS website. The information and entry point of the website is shown nearby.

Entering “Poland” in the city field and then selecting Maine from the drop-down state menu results in the information shown in the second illustration, presenting the names of the postmasters or officers-in-charge, and years of service.

Just as important, one also gets the history of the changes in a city’s name. In this example, the name is now Poland, but it originated as South Poland (with a postmaster) in 1862; became Poland Spring May 9, 1939; and finally became Poland Jan. 1, 1996.

A Wikipedia search finds that South Poland was incorporated in 1797, so there was no post office there until 1862.

There is other important information available on this USPS website. Note the admonition on the first page shown: “Remember! Not all Post Offices established before 1986 are listed. See FAQs [Frequently Asked Questions] about Postmaster Finder.”

I found four of the Postmaster Finder FAQs to be particularly interesting, and have excerpted parts of them below.

Q: Why is some information prior to 1986 not available in Postmaster Finder?

Q: How can I get information on a postmaster or a Post Office that is not in Postmaster Finder?

A: The National Archives will provide information on postmasters and Post Offices prior to 1971 upon request. Information after 1971 can be obtained from the USPS Historian. Additionally, historians have compiled books on Post Offices for many states, some of which include postmasters’ names and appointment dates. A partial list of such books is available in Publication 119, Sources of Historical Information on Post Offices, Postal Employees, Mail Routes and Mail Contractors. Your local library should be able to assist you in obtaining these.

Q: How were postmasters appointed and what were the necessary qualifications?

A: From 1836 to 1971, postmasters at the larger Post Offices were appointed by the President, by and with the consent of the Senate. Postmasters earning less than $1,000 per year were appointed by the Postmaster General, generally upon the advice of the local congressman or townspeople. Regulations required that postmasters execute a valid bond and take an oath of office. Minors were ineligible, and U.S. citizenship was required for appointment to all but the smallest Post Offices. Prior to 1971, it was also required that postmasters live in the delivery area of their Post Office. Since 1971, postmasters have been selected through the merit system.

A: Citizens of a community who desired a new Post Office generally submitted a request to the Post Office Department stating reasons why they thought a Post Office should be established, the number of patrons who would be served, and the names proposed for the Post Office. Other factors considered were the nearness of existing postal units and the relative cost involved, including the estimated expense of mail transportation to the proposed office.