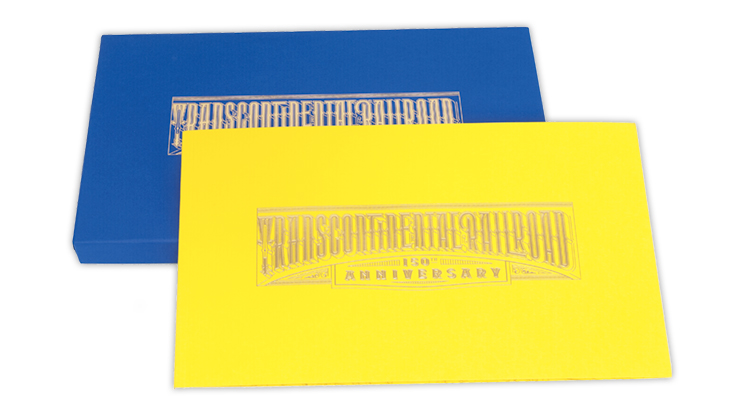 The blue box for the Transcontinental Railroad issue and the 44-page book with yellow cover that is included within the boxed set. The set, which also includes what the U.S. Postal Service describes as progressive proofs, was sold for $79.95 at the May 10 first-day ceremony for the stamps. 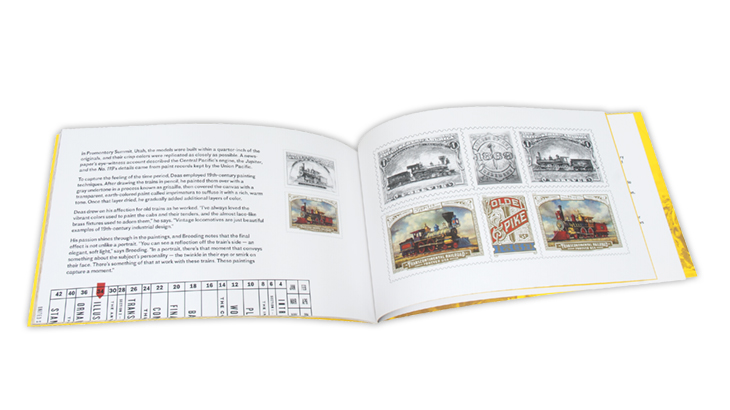 The book contains historical information about the completion of the Transcontinental Railroad and details of the designing, printing and production of the new postage stamps. 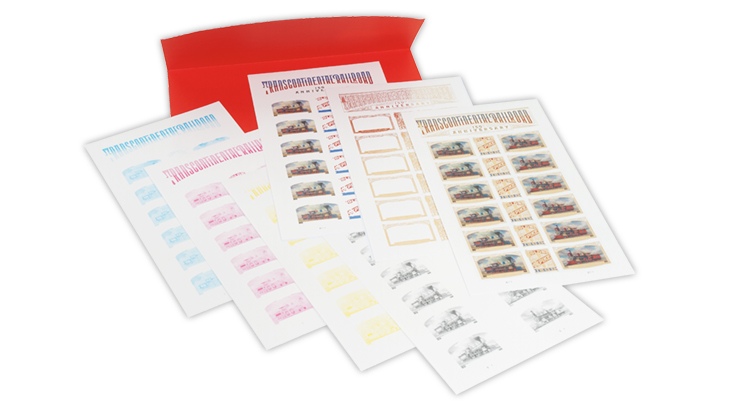 Six proof panes are included in the box set. These proofs do not contain the die cuts that normally separate individual stamps. A single pane of the stamps as issued is also included. 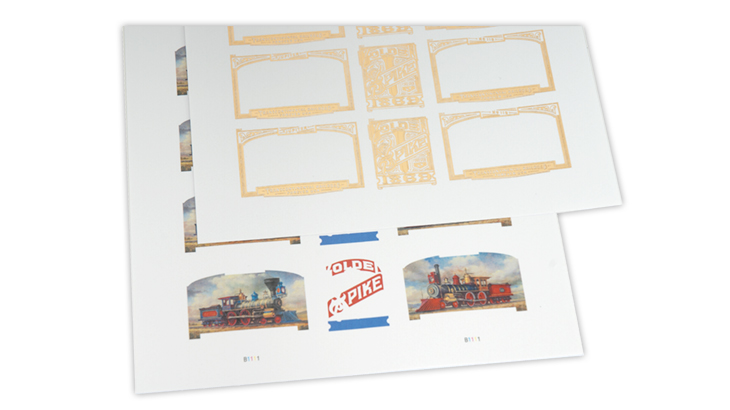 Comparing the different proof panes gives the collector insight into the combination process used to print and process the new Transcontinental Railroad forever stamps. Shown here are close-ups of the composite color proof and the gold foil proof.
Previous
Next

The United States Postal Service is selling a boxed set in association with the Transcontinental Railroad forever stamp pane issued May 10 in Promontory Summit, Utah.

Also included are a standard die-cut pane of the issued stamps, a red protective sleeve with gold foil imprint, a certificate of authenticity card, and a 44-page book with a yellow cover that is imprinted with gold foil.

The box containing these items has a gold foil impression on the otherwise solid blue lid. Sepia illustrations decorate the inside of the base and the lid.

The boxed set was offered at the USPS sales counter in Utah during and after the first-day ceremony for the set of three Transcontinental Railroad forever stamps, with a selling price of $79.95 as USPS item No. 570429.

The box and the book are sized just slightly larger than the issued stamp pane and the proof items, which measure 5.85 inches by 10.32 inches.

The boxed set bears some similarity to the $2 Jenny Invert numbered boxed set offered by the Postal Service for $200 in 2013 and sold between Aug. 9 and Oct. 15 of that year.

The prooflike items contained in that earlier set are mentioned in a note in the Scott Specialized Catalogue of United States Stamps and Covers following the listing for United States Scott 4806, but not assigned a value.

The new Transcontinental Railroad boxed set, which is not numbered, seems likely to receive a similar catalog treatment.

Roughly two-thirds of the book tells the story of the completion of the Transcontinental Railroad, while the final pages describe the process of designing, printing and processing the new stamps.

The stamps were the first to be printed on the Gallus RCS press by Banknote Corporation of America, combining four-color offset lithography with the application of gold foil in an inline-process. One benefit of the inline foil application is that it reduces the opportunities for printing errors.

The new machinery allows the successful printing of gold foil lines at .72 points of thickness, “a mere hundredth of an inch,” according to the book.

The individual proof panes for the four single colors each show an impression of one color only, with just the single plate number digit for that color showing in the bottom margin area.

The composite color proof has no gold impression and shows the full plate number of B1111.

The gold foil proof has no plate number and no additional color.

The proof panes provide the collector with some insight into the production process: specifically, how the four colors and the gold foil are combined in the standard pane to create the framed train portraits by Michael Deas and the ornate typographic elements by Kevin Cantrell.

The box set is offered on the USPS Stamp Store website, along with pin sets, cacheted covers, art prints and more.

Updated May 17 to note that the boxed set is available on the USPS Stamp Store website.