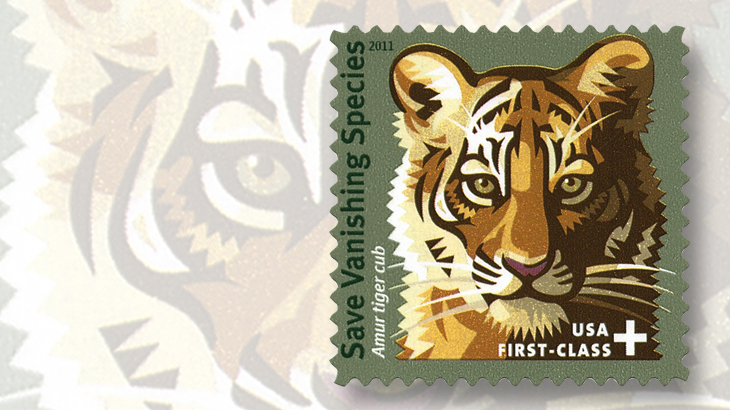 The Save Vanishing Species semipostal stamp issued in 2011 was the last United States semipostal issued to support a new cause, despite a 2016 rule change that opened the door for the USPS to select and issue new semipostal stamps at the postmaster genera

Semipostal stamps, which serve the dual purpose of paying for postage and collecting funds that will benefit a designated cause, have been issued in the United States for a little more than 20 years now.

The semipostal stamp program administered by the U.S. Postal Service has moved in fits and starts, waiting for the U.S. Congress to select the agencies that will benefit, and for the president to sign each Act mandating a new stamp.

And shortly after the Postal Service launched a new initiative to select subjects and issue semipostals without Congressional involvement, at least one lawmaker wants Congress to claim full control of how semipostal stamp subjects are selected and where the money collected will go.

The first U.S. semipostal, supporting breast cancer research, was issued July 29, 1998 (Scott B1), and initially sold for 40¢, collecting an 8¢ surtax for government medical research efforts and 32¢ for what was then the first-class letter rate.

The Breast Cancer Research stamp is still on sale today, though the stamp now being sold is a major variety of the original: it is lithographed rather than gravure-printed. The new variety was issued Sept. 30, 2014 (Scott B5).

The current selling price is 60¢, divided between 49¢ for postage and 11¢ for research.

“As of April 2017, the stamp has raised over $84.4 million for breast cancer research,” the Postal Service reports. “By law, 70 percent of the net amount raised is given to the National Institutes of Health and 30 percent is given to the Medical Research Program at the Department of Defense.”

Only three other causes have benefited from U.S. semipostals since the first was issued.

On June 7, 2002, a stamp was issued showing first responders raising an American flag in the aftermath of the 2001 World Trade Center attack. The surtax provided assistance to the families of emergency relief personnel who were killed or injured in the 9/11 attacks (Scott B2).

The Stop Family Violence semipostal issued Oct. 8, 2003, featured a childlike drawing of a crying youngster and raised funds for domestic violence programs through the end of 2006 (Scott B3).

The only other semipostal still on sale in post offices today is the 2011 Save Vanishing Species semipostal, which, like the Breast Cancer Research stamp, currently sells for 60¢ and donates 11¢ to the benefiting agency, the Multinational Species Conservation Funds of the U.S. Fish and Wildlife Service (Scott B4).

All of these stamps came about because of bills passed in Congress and signed into law by the president.

The USPS office of the Inspector General explained in February 2016 that the Postal Service planned to sell discretionary semipostal stamps only one at a time, “but they could be sold with one or more congressionally approved semipostal stamps.”

The rule change opened the door for the Postal Service to issue five semipostals, one at a time, over a 10-year period.

Speaking during a public session of the Postal Regulatory Commission on Sept. 1, 2016, USPS director of Stamp Services Mary-Anne Penner first addressed the Postal Service’s plans for its semipostal program.

While the Postal Service was planning to conduct its own semipostal stamp program alongside the semipostal program built on congressional mandates, at least one U.S. congressman has tried to make that impossible.

“The eight-term conservative lawmaker told Linn’s through a spokeswoman that he does not believe the USPS should have the ‘unilateral ability to raise funds through specialty stamps and give those funds to its own preferred designations,’” McAllister wrote.

“That is a prerogative that the Constitution grants solely to the Congress in the ability to appropriate funds,” spokeswoman Lesley Fulop said.

The Congressional summary of the bill reads: “This bill removes the authority of the U.S. Postal Service (USPS) to issue semipostal stamps (stamps sold at a premium to raise funds for causes of national public interest) except as provided by an Act of Congress. (Currently, the USPS issues semipostals using its own discretion to determine the causes it considers to be in the national public interest.)

“The bill also makes entities (currently, only agencies) eligible to receive amounts that become available from the sale of semipostals. Congress must determine the appropriate agencies or entities that receive such amounts.”

In his March article, McAllister noted, “Burgess offered a similar bill in the previous session, and it failed to get out of committee.”

When H.R. 128 was introduced Jan. 3, it was promptly referred to the House Committee on Oversight and Government Reform, where it remains today.

So where does this leave the U.S. semipostal program?

Six years have passed since the last new U.S. semipostal stamp was issued, and the Postal Service now appears to be taking a cautious approach to inaugurating the new discretionary semipostal program that it enthusiastically announced some 10 months ago.

USPS spokesman David A. Partenheimer told Linn’s Stamp News in June: “The Postal Service is still in the process of selecting the semipostal stamp subject for the discretionary program. There is no timeline for this decision. The stamp subject will be announced at an appropriate time.”

That doesn’t mean, however, that Congressional representatives have stopped asking for semipostal stamps to support causes they feel should benefit.

Two days after Burgess introduced his bill to block the USPS from issuing semipostals of its own choosing, Rep. Barbara Lee, D-Calif., introduced a different bill asking for a semipostal stamp to support the work of the Peace Corps.

Rep. David Young, R-Iowa, would like to see a stamp issued to benefit certain U.S. Department of Agriculture conservation programs.

Rep. Elise M. Stefanik, R-N.Y., has asked for a stamp to contribute to programs that combat invasive species.

And requests to extend the life of the existing Save Vanishing Species semipostal have been submitted by Sen. Rob Portman, R-Ohio, and Rep. Daniel M. Donovan Jr., R-N.Y. The stamp, picturing an Amur tiger cub, is currently scheduled to be taken off sale in 2018.

These are the requests lawmakers made during the first few months of this year alone.

All of these requests have been written into bills introduced by their sponsors, but to date those bills have not moved out of the respective committees to which they were assigned.