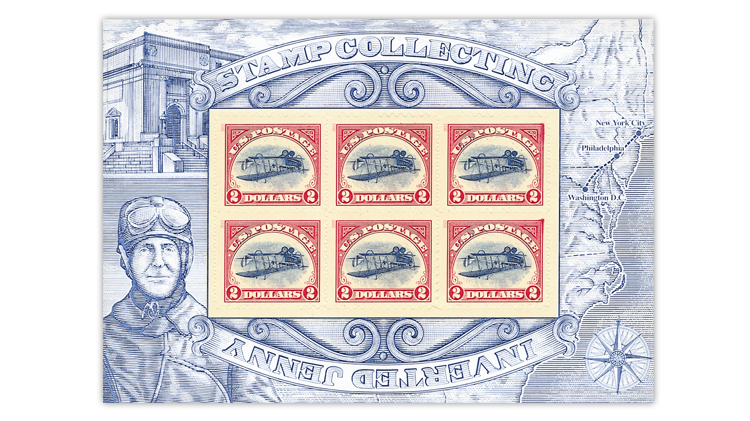 At the end of October, sales of the 2013 $2 Jenny Invert pane of six will end at post offices. The panes will be returned to Stamp Fulfillment Services in Kansas City, Mo., and sold through the mail-order facility and at select stamp shows.

The United States Postal Service is about to remove all of the $2 Jenny Invert stamps issued in 2013 from its post offices around the country.

After the recall, the stamps (Scott 4806) will return to sale through USPS Stamp Fulfillment Services, the federal agency’s retail mail-order division in Kansas City, Mo.

Linn’s Stamp News learned in early October that post offices nationwide have been instructed to stop sales of the pane of six $2 stamps at the end of the month.

“To make it easier for those who are interested in purchasing the $2 Jenny Invert we are pulling them from the field and making them available through SFS,” USPS spokesman Roy Betts told Linn’s. “They will also be available at USPS sponsored stamp shows while supplies last.”

The $2 Jenny stamps were issued as a tribute to America’s most famous stamp error, the 1918 24¢ Jenny Invert airmail stamp that has its blue “Jenny” biplane accidentally printed upside down within the carmine rose frame (Scott C3a).

But the $2 stamps were at the center of a controversial USPS promotional program that randomly included 100 specially printed panes intentionally showing the “Jenny” biplane in the center of the stamp design flying right-side up. The regularly issued $2 stamp portrays the plane upside down.

Every pane from the 2013 issue was sealed in a printed paper envelope within a cellophane wrapping, thwarting any effort to detect the rare upright variety from among the common standard issue.

The total print run for the issue was 2.2 million panes.

Collector demand for the limited upright variety pushed aftermarket values sky high, with some public auctions seeing realizations of more than $50,000 for a pane six stamps that originally sold weeks earlier for just $12.

So far, at least 32 of the 100 panes of the upright variety have been discovered by postal customers.

The 100 upright variety panes were packaged with a card printed with a phone number the finder could call to receive a certificate signed by the U.S. postmaster general, and to register the purchase and discovery. But because the registration is voluntary, it is presumed that many additional scarce panes were found but never recorded.

That uncertainty also means that some of the upright Jenny stamps could still be in sealed packaging, soon to be returned to Stamp Fulfillment Services.

In 2016, the Postal Service’s warehouse inventory of the $2 Jenny panes was depleted and they were taken off sale through Stamp Fulfillment Services, but the stamps continued to be sold through some local post offices.