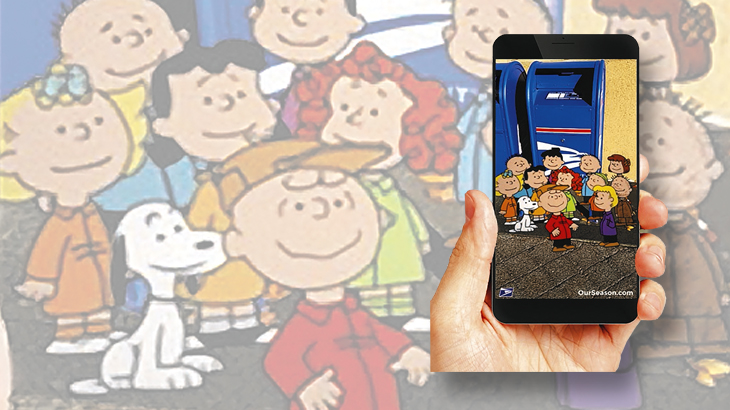 A new smartphone app adds Peanuts characters to the scene when the camera is aimed at a blue USPS mailbox.

The USPS AR (augmented reality) app is a free download from Google Play or the iTunes App Store.

When the app is opened and the smartphone is aimed at a blue USPS mailbox, the app works with the smartphone’s camera to trigger an image of 12 Peanuts characters, including Charlie Brown and Snoopy, gathering around the base of the mailbox.

The characters show a small amount of animation when they first appear, and the phone emits a bit of the song Christmas is Coming by Vince Guaraldi, the jazz musician who composed music for several Peanuts animated television specials.

Photos can be taken with the app in action — capturing the mailbox, the Peanuts characters, and anyone else standing in the scene — and shared on social media.

The Peanuts photo opportunity debuts Nov. 23 through Nov. 25, according to the Postal Service, and appears again in mid-December.

Because the app is focusing on the mailbox, the words “Scan boxes every Monday and Friday for new animations” appear on the smartphone screen.

The app will change scenes in coming weeks to show additional Christmas or holiday themes, such as wrapping paper covering the mailbox, and a gingerbread box scene that also allows the customer to order stamps.

The seasonal AR app experiences will run from Nov. 23 through Dec. 28, according to the Postal Service.