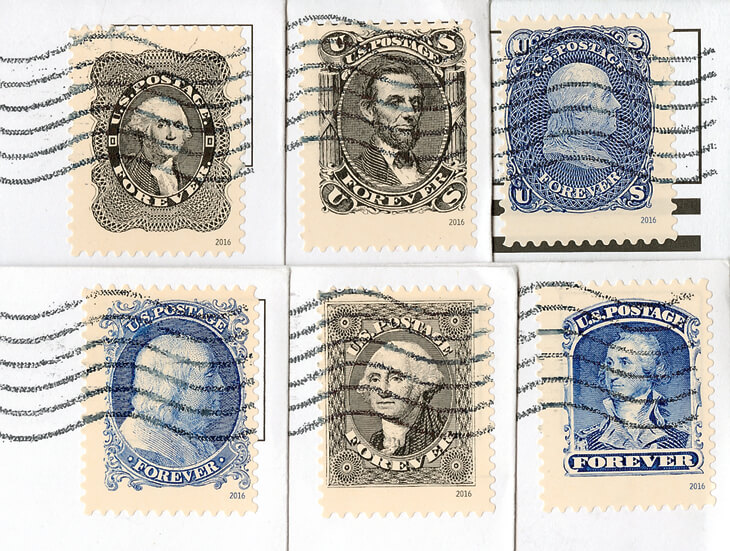 These on-cover examples of the six United States Classics Forever stamps issued June 1, 2016, are noticeably off center. Extreme pressures during printing caused what the U.S. Postal Service calls “distortion” of the stamp paper, which caused the die-cut stamps to have poor centering.

Among the many highlights of World Stamp Show-New York 2016 was the June 1 issuance of the Classics Forever commemorative stamps in an attractive pane of six with decorative selvage.

Stamp collectors, obviously, were the U.S. Postal Service’s target with this issue, which was sold only through the Stamp Fulfillment Services mail-order center in Kansas City, Mo.

Despite the restricted availability, it didn’t take long for the stamps to begin appearing on Amos Media subscription reply mail sent to the company’s offices in Sidney, Ohio. Amos Media owns Linn’s Stamp News and the Scott stamp catalogs.

During the ensuing months, Linn’s began taking notice of the centering of the Classics Forever stamps that were arriving on the incoming mail.

Most of the stamps encountered were off center — remarkably so, in some cases — as can be seen on the six on-cover examples pictured above.

Which naturally raises a question: Why?

In this day and age of accurate, high-speed printing, stamps with very fine or better centering are the norm, what collectors, in particular, expect to see.

A reasonable explanation for the less-than-stellar centering of the Classics Forever stamps is that they were intentionally produced that way.

After all, the majority of classic-period U.S. stamps have less than very fine centering because printing methods were much less precise in those days.

To find out what was going on, Linn’s contacted Roy Betts, a spokesman in the Postal Service’s corporate communications department in Washington, D.C.

Betts provided this reply from the Postal Service:

“The Classics [Forever] stamps were printed using the intaglio [recess-printing] process. Intaglio is a traditional printing technique that is infrequently used in US stamp production today.

“The intaglio process introduces extreme pressure during the printing process that can cause distortion of the sheet during print production. This distortion can vary through the production run.

“The equipment used to die cut this stamp issue is the same equipment that is used to process billions of stamps annually. The variation in the movement of the die cut is insignificant thus producing stamps that are well centered.

“However, 99% of stamps produced are printed in offset which does not introduce distortion in the sheet, therefore allowing for well centered die cut stamps.

“The distortion that the intaglio process introduces appears to cause the die cut centering to be off, but in reality it is the distortion of the stamps themselves that are causing the variation.

“The engravings for the Classics [Forever] stamps were created from actual stamp specimens curated from the [National] Postal Museum. The stamps themselves were different sizes which also affects the appearance of the centering.”

By “different sizes” the Postal Service means the dimensions of the printed designs, which are slightly different in size.

Linn’s then asked for a more detailed explanation of how the printer (Banknote Corporation of America) accounted for the “distortion” caused by the extreme pressures of intaglio printing.

“Distortion caused by the Intaglio process is always considered and die cut tools are ordered according to known distortion factors,” the USPS said.

“In the case of the Classics [Forever] stamp issue, die cut tooling was ordered after the production run commenced to insure accurate fit of the die cut plates.

“The [stamps] ran for several weeks on press and varying conditions can cause variances in the distortion of the sheet.

“For example, if the moisture content in the raw materials changes, the distortion of the sheet on the Intaglio press can vary. These variances can cause the appearance that the die cuts are not centered.”

The Postal Service made clear that new die-cutting mats were ordered to finish printed Classics Forever stamps, because “the pane of six stamps is not a typical format.”

These helpful responses aside, challenges remain for collectors. Among them are finding a Classics Forever pane with all six stamps having very fine or better centering.

For collectors of used stamps, try assembling a set of six very fine singles — on or off cover.

If you prefer off-cover stamps, you’ll need to be patient: Soaking Classics Forever stamps requires using very hot water for periods of up to 30 minutes or longer to liberate them from envelope paper.

Whichever summons you decide to take up, it might take longer than you think to accomplish.