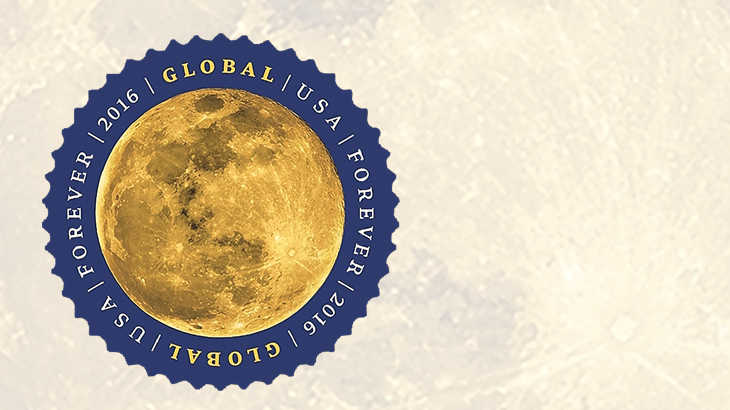 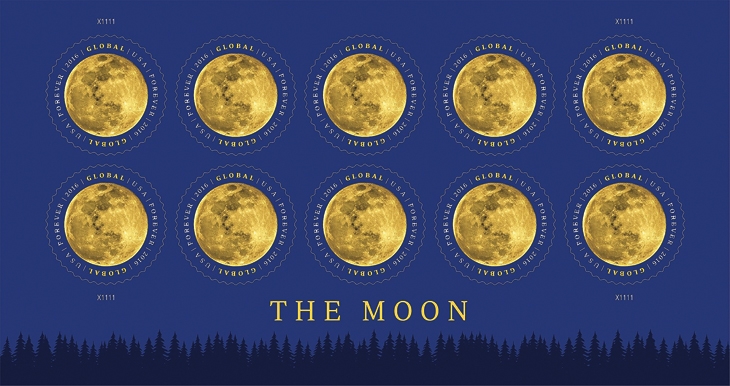 The pane of 10 Moon stamps includes dark blue selvage that resembles a night sky, with a line of trees along the bottom of the pane. The stamp is the fifth round global forever stamp issued. 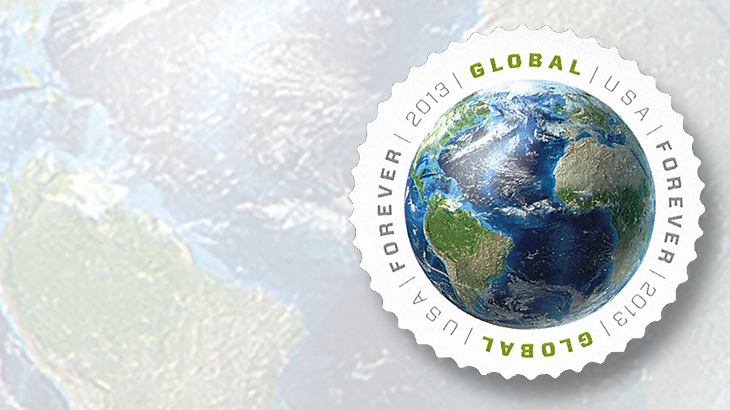 The first global forever stamp, picturing Earth, was issued Jan. 28, 2013. Later stamps in the series have shown a Christmas wreath, a different view of Earth, and a wreath of silver bells. 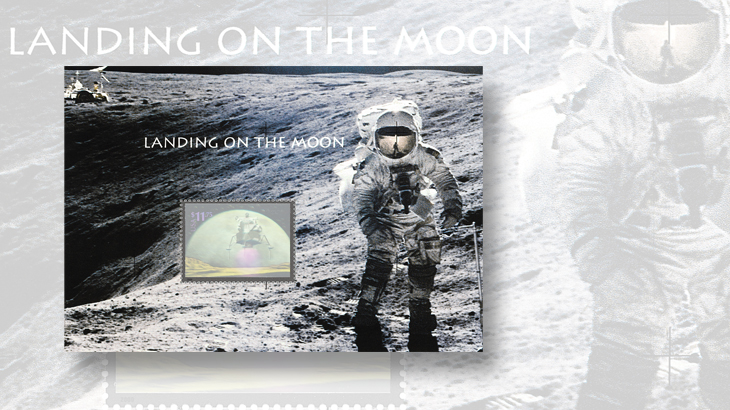 A souvenir sheet issued in 2000 with one $11.75 hologram stamp celebrated lunar exploration. 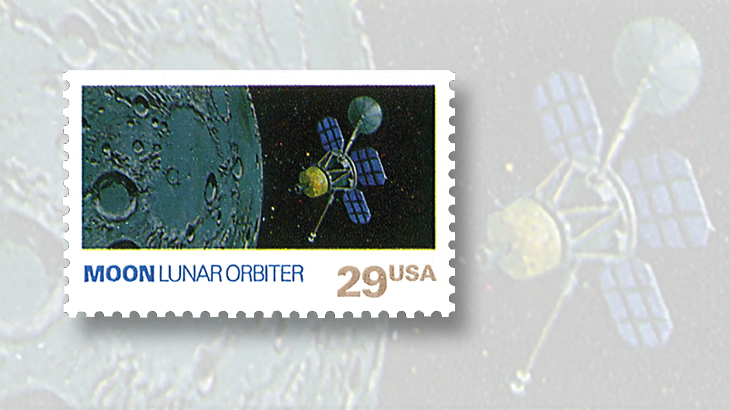 The newest round global forever stamp from the United States Postal Service pictures Earth’s moon. Features of the lunar surface are easily seen in the detailed image created from an existing photograph by Beth Swanson.

The stamp and pane selvage were designed by Greg Breeding. William J. Gicker was the USPS art director for this issue.

On Feb. 12, the USPS announced that the Moon stamp would be issued nationwide Feb. 22. The official city of issue is Washington, D.C., but there is no first-day ceremony scheduled.

Whether by chance or design, the Feb. 22 issue date coincides with the appearance of this year’s February full moon, traditionally referred to as the “snow moon.”

The new stamp is valid for machineable international letter mail weighing up to 1 ounce “to any country to which First-Class Mail International service is available,” according to the Postal Service.

The nondenominated ($1.20) stamp is inscribed “global” and “forever” to indicate that it always will be valid for the 1-ounce international letter rate regardless of future rate increases.

The stamp will be issued in panes of 10 consisting of two horizontal rows of five stamps. The background selvage and the outer margin of the stamp itself is a dark blue, mimicking the night sky.

The design shows a photograph of the full moon as it rises over Fort Lauderdale, Fla., according to the Postal Service.

The words “The Moon” are centered below the block of 10 stamps, while along the bottom of the pane is a darkened scene showing a line of trees.

The stamp is offset printed with microprinting in the design.

Postal Service technical details released in mid-February disclosed that a Moon global forever stamp press sheet with die cuts will be available for $120 (consisting of 10 unsevered panes of 10 stamps at face value), with 1,000 sheets made available. For this issue, there will be no press sheet without die cuts, according to USPS spokesman Mark Saunders.

“To provide the best customer service, USPS is in the process of re-evaluating our line of stamps and philatelic products,” Saunders added.

The Postal Service is also offering two first-day covers (without cachets): one with a black postmark, and one with a digital color pictorial postmark.

The new stamp is not the first U.S. stamp to show the moon as its central feature.

A 29¢ Moon stamp was issued almost a quarter-century ago on Oct. 1, 1991 (Scott 2570), as part of the Space Exploration booklet containing 10 different stamps. The other nine stamps in the booklet showed the different planets then considered part of the solar system.

Before that, the moon’s surface was depicted in the foreground of the 6¢ Apollo 8 commemorative issued May 5, 1969 (Scott 1371). It reappeared four months later on a 10¢ airmail stamp commemorating the first manned moon landing (Scott C76), which shows astronaut Neil Armstrong setting foot on the moon’s surface for the first time.

Other stamps commemorating the 1969 moon landing and later missions also showed the moon.

One of the most spectacular of these is the $11.75 Landing on the Moon souvenir sheet of one stamp issued July 8, 2000 (Scott 3413). The rectangular hologram stamp shows a composite image of a lunar module landing on the moon’s surface, with a backdrop of the moon enlarged on the horizon.

The selvage photograph of the astronaut on the moon pictures lunar module pilot Charles M. Duke Jr., the 10th man to walk on the moon, during the 1972 Apollo 16 mission.

The new stamp is the fifth in a series of round global forever stamps issued by the U.S. Postal Service.

Technical details and first-day cancel ordering information for the Moon global forever stamp are given below.

Standard ordering instructions apply. Collectors requesting first-day cancels are encouraged to purchase their own stamps and affix them to envelopes. The first-day cover envelopes should be addressed for return (a removable label may be used), and mailed in a larger envelope addressed to The Moon Stamp, Special Events, Box 92282, Washington, DC 20090-2282. Requests for first-day cancels must be postmarked by April 22.

The Postal Service’s uncacheted first-day cover for the Moon global forever stamp is item No. 589216 at $1.64. USPS order numbers for stamps and FDCs also appear in Linn’s 2016 U.S. Stamp Program.