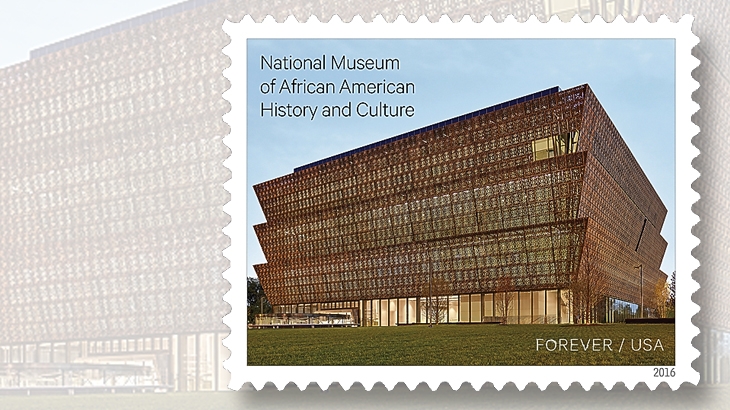 Originally planned with a Sept. 24 release date, the forever stamp honoring the National Museum of African American History and Culture will be issued later this year, according to the United States Postal Service.

Just four weeks before the announced release date, the United States Postal Service has revealed it will reschedule the issuance of the forever stamp commemorating the National Museum of African American History and Culture.

Originally set to go on sale nationwide Sept. 24, the stamp issuance will take place “later in the year,” according to an email sent by Postal Service officials on Aug. 30.

“We will send you more details once a new date has been confirmed with the Museum,” the email added.

USPS spokesman Roy Betts confirmed to Linn’s Stamp News that the nondenominated (49¢) forever stamp celebrating African American history and culture will not be issued Sept. 24, despite the fact that release date and other stamp details were published in the Postal Bulletin dated Aug. 4. The Postal Bulletin is a fortnightly USPS publication that provides employees of the federal agency with procedural updates and additional information.

Betts said that the Postal Service is working with the museum to set up a new date for the issuing event. He noted that the Washington, D.C., museum has a number of activities planned in association with its Sept. 24 one-year anniversary, and that a decision was made to follow up with a later stand-alone stamp event.

Using the information that appeared in the Postal Bulletin, Linn’s published a new-issue story about the planned stamp on page 1 of its Sept. 4 issue.

Details of the revised stamp issue date will appear in Linn’s and on Linns.com as they become available.