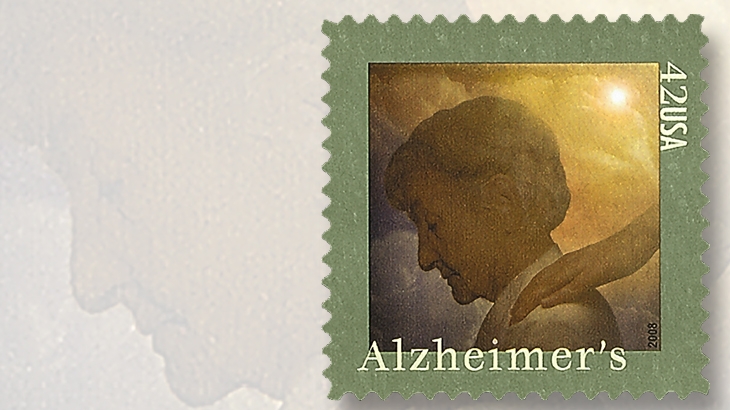 A 42¢ stamp was issued in 2008 to promote awareness of Alzheimer's disease. The design by Matt Mahurin was reversed and reused on the planned new semipostal. 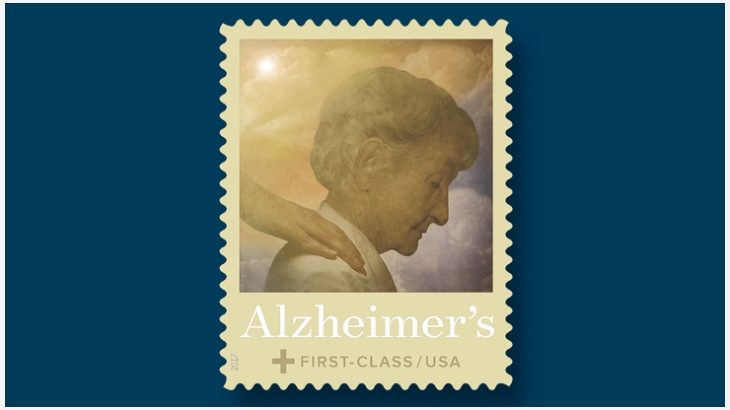 A new United States Alzheimer's semipostal stamp will be issued Nov. 30. The design is by artist Matt Mahurin.
Previous
Next

The design of the nondenominated (49¢+11¢) Alzheimer’s semipostal stamp was revealed by the U.S. Postal Service Nov. 2.

At the same time, the Postal Service announced that the stamp, the nation’s sixth semipostal and the first in the USPS discretionary semipostal program, will be issued Nov. 30 with a 10 a.m. ceremony at Johns Hopkins Bayview Medical Center in Baltimore, Md.

Although the event is free and open to the public, the Postal Service notes that an online RSVP to usps.com/alzheimers is required to attend the ceremony.

The stamp design by multimedia artist Matt Mahurin uses a variation of the same illustration that served as the vignette for the 42¢ Alzheimer’s Awareness stamp issued Oct. 17, 2008 (Scott 4358).

That illustration shows an Alzheimer’s patient with the comforting hand of a caregiver on the woman’s shoulder.

The new stamp flips the design horizontally, resulting in the woman facing right. She was shown facing left in the earlier issue.

The Postal Service notes that the change was made “to help differentiate between the two stamps."

Ethel Kessler of Bethesda, Md., is the art director for this issue.

The Postal Service notes that the Semipostal Authorization Act (Pub. L. 106–253), grants it discretionary authority to issue and sell semipostal fundraising stamps to advance such causes as it considers to be ‘‘in the national public interest and appropriate.’’

Under the program, the Postal Service intends to issue five semipostal fundraising stamps over a 10-year period, with each stamp to be sold for no more than two years.

The next three discretionary semipostal stamps have not yet been determined.

The nondenominated Alzeimer’s semipostal will sell for 60¢, with 49¢ fulfilling the current first-class letter rate. The 11¢ surtax has been earmarked for the United States Department of Health and Human Services.