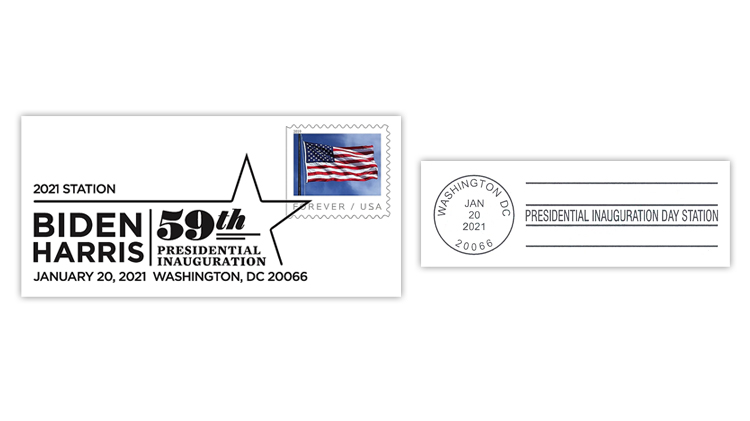 The United States Postal Service revealed its designs for the 2021 presidential inaugural postal cancellations a day before the Jan. 20 inauguration of President-elect Joe Biden and Vice President-elect Kamala Harris in Washington, D.C.

Postal Service spokesman Roy Betts said the announcement had been delayed because the Postal Service’s planned inaugural cover had not been approved.

A similar delay occurred four years ago with the production of a USPS cacheted cover for the Jan. 20, 2017, inauguration of Donald Trump.

In response to a query from Linn’s, Betts said Jan. 19 that the reason for the delay is that “The Postal Service has designed a cachet for the Inauguration this year, but we have not yet received word that it is approved, so we cannot yet go to print.”

“The Inaugural special postmark was cleared and approved for use at a local level and through Stamp Fulfillment Services (SFS). Of course we have been encouraging all cancellations be done through SFS during the pandemic.”

Stamp Fulfillment Services released copies of the postmarks that will be used to mark the Biden-Harris inauguration.

The design of the cacheted cover and its price were not announced.

Because of safety concerns the Washington, D.C., post office that would make the postmark available to individuals attending the event will not open.

The pictorial cancel features a star and the words “Biden Harris, 59th Presidential Inauguration Washington, DC 20066” and the date “January 20, 2021.”

The cancel featuring the standard circular datestamp and four-bar killer has the words “Presidential Inauguration Day Station” between the second and third bars of the killer.

The late announcement of the cancels had worried some cachetmakers who were anxious to get their covers processed quickly.

Rollin Berger of Clifton, Va., informed Linn’s that he had been told only that a postmark was “in the works, but nothing has been announced.”

He told Linn’s that he believed the delay in the announcement was because the cachet design had not been approved.

The Biden inaugural committee did not respond to a request for comment.

Requests should be postmarked by May 20.