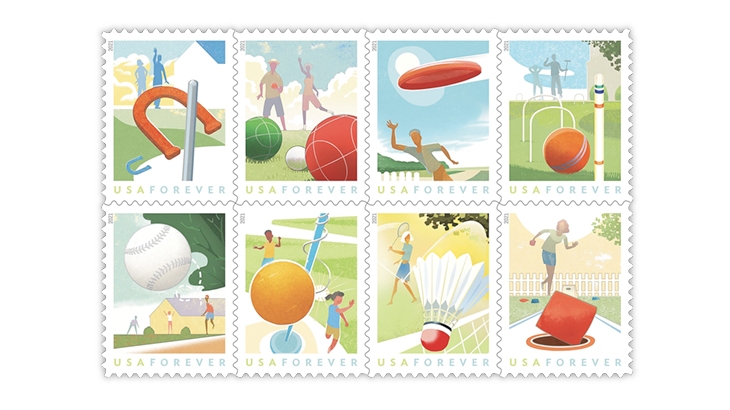 The United States Postal Service on Tuesday, May 18, disclosed the issue dates and first-day cities for the remaining previously announced 2021 U.S. stamp issues.

The four Western Wear forever stamps showing a cowboy hat, belt buckle, cowboy boot and Western-style shirt in a double-sided pane of 20 will be issued July 23 in Abilene, Texas. No ceremony will take place. The stamp artist, Ryan Feerer, lives in Abilene.

On July 30, the Raven Story commemorative forever stamp will be issued in Juneau, Alaska.

Of the five lighthouses to be featured on the Mid-Atlantic Lighthouses commemorative forever stamps, the one near Highlands, N.J., will host the first-day ceremony on Aug. 6. The other four stamps show lighthouses at Montauk Point, N.Y.; Erie Harbor Pierhead, Pa.; Harbor of Refuge, Del.; and Thomas Point Shoal, Md.

The Missouri Statehood commemorative forever stamp will be issued Aug. 10, Statehood Day, in Jefferson City, Mo. According to the Jefferson City Convention and Visitors Bureau, in addition to the stamp “reveal,” the day’s events will include exhibits in the Capitol, a U.S. naturalization ceremony, and an ice cream social at Central Dairy.

The eight Backyard Games commemorative forever stamps will be issued Aug. 12 in Rosemont, Ill. The date and location coincide with the Great American Stamp Show scheduled to take place Aug. 12-15 at the Donald E. Stephens Convention Center in Rosemont.

No ceremony is planned for the Sept. 9 issuance of the Happy Birthday stamp, but the first-day postmark will appropriately be in Toast, N.C.

El Paso, Texas, will be the first-day location for the four Day of the Dead commemorative forever stamps to be issued Sept. 30.

The four A Visit From St. Nick special forever stamps are scheduled to be issued Oct. 7 in Santa Claus, Ind.

And what is expected to be the final stamp issue of the year, the set of four Otters in Snow forever stamps, are slated for release Oct. 12 in Otter, Mont.