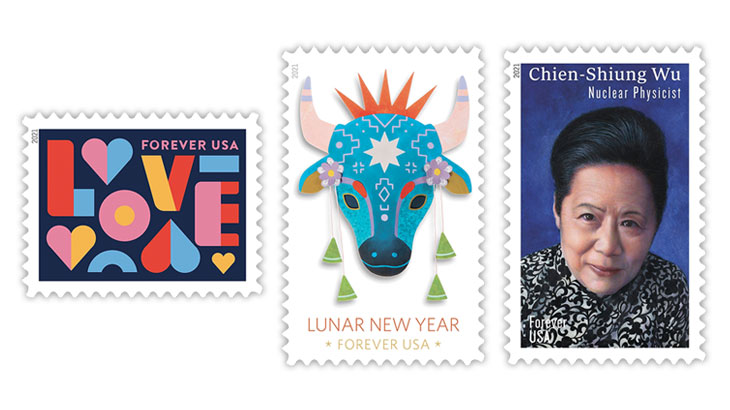 The United States Postal Service has announced issue dates for three stamps that will released in January and February 2021.

Issue dates for three 2021 stamps have been announced by the United States Postal Service.

On Nov. 12, the agency revealed 19 issues (63 stamp subjects and designs) for the coming year, but did not specify when any of the stamps would be issued.

The Love forever stamp for 2021 will be issued Jan. 14, with Loveland, Colo., designated as the city of issue.

The Year of the Ox stamp commemorating the new lunar new year will be issued Feb. 2 in Chicago, Ill. The lunar new year begins 10 days later on Feb. 12.

According to the Postal Service, virtual stamp dedication events will be held for these stamps on the USPS Facebook and Twitter pages, and additional information will be provided later.

Complete details about the 2021 U.S. stamps revealed so far were reported on page 1 of the Dec. 7 Linn’s Stamp News.