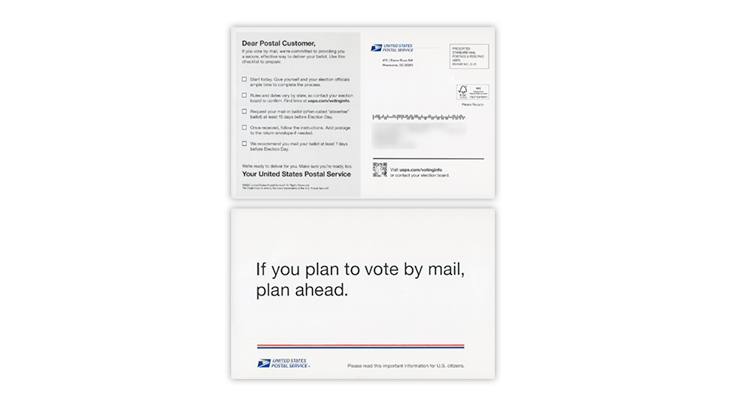 In early September the United States Postal Service sent a mass mailing of postcards that provide guidance on voting by mail. Both sides of the card are shown. The message side advises, “If you plan to vote by mail, plan ahead.” The USPS has defended the

In early September, the United States Postal Service sent a mass mailing of postcards about voting by mail in the Nov. 3 elections. But before the cards began reaching their destinations, they came under fire from several state election officials who said the mailing ignores how voting works in their states.

“Appreciate the effort @USPS, but this could be confusing for California,” said James Schwab, California chief deputy secretary of state, in a tweet.

He complained that the postcards stated that voters should request an absentee ballot “at least 15 days before Election Day.”

Not so in California where ballots are automatically mailed to voters with return postage-paid envelopes, Schwab and other local officials noted.

Colorado Secretary of State Jena Griswold won a restraining order against the USPS after she sued the agency and accused it of mailing “false statements” to voters.

“We asked them to delay or just not send them in Colorado,” Griswold told a TV station, “and they refused.”

Colorado and California automatically send ballots to voters before elections.

Postal Service spokesman David Partenheimer defended the mailing, which he said went to all 50 states and the District of Columbia at a cost of about $28 million.

“The intention of the mailer was to send a single set of recommendations that provided general guidance allowing voters who choose mail-in voting to do so successfully regardless of where they live and where they vote,” he said.

“Our mailer was intended to be general all-purpose guidance on the use of the mail and not guidance on state rules,” Partenheimer said.

The cards do contain the following warning: “Rules and dates vary by state, so contact your election board to confirm.”

Partenheimer said the mailing was part of a “national omni-channel public information campaign in order to educate the American public about the Postal Service’s role and to inform voters on what to expect if they choose to use the mail.”

In addition to the postcard mailing, the campaign includes radio and TV spot announcements, signage in postal lobbies, and social media and online notices, Partenheimer said.

President Donald Trump repeatedly has attacked mail-in voting as leading to voting fraud. Partenheimer noted in his statement to Linn’s that the mass mailing “neither encourages nor discourages mail-in voting.”

In May the USPS became embroiled with the White House and the Centers for Disease Control and Prevention over the cost of mailing 128 million postcards warning about the coronavirus.

The USPS said that mailing cost the agency $28 million including postage and printing.