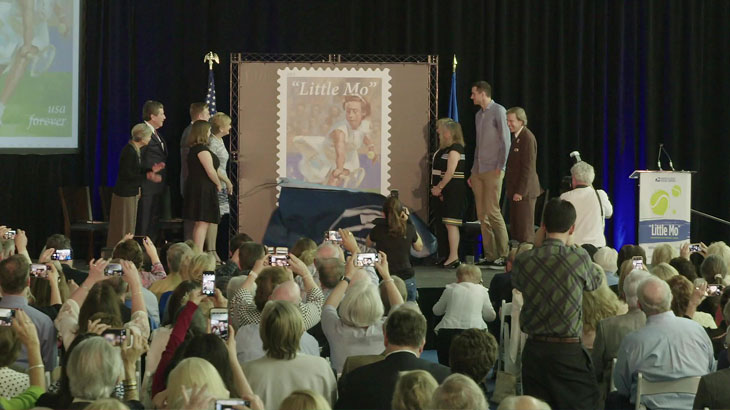 The unveiling of the the Little Mo forever stamp April 23 on the indoor tennis courts at the Southern Methodist University Tennis Center in Dallas, Texas. Image courtesy of USPS video. 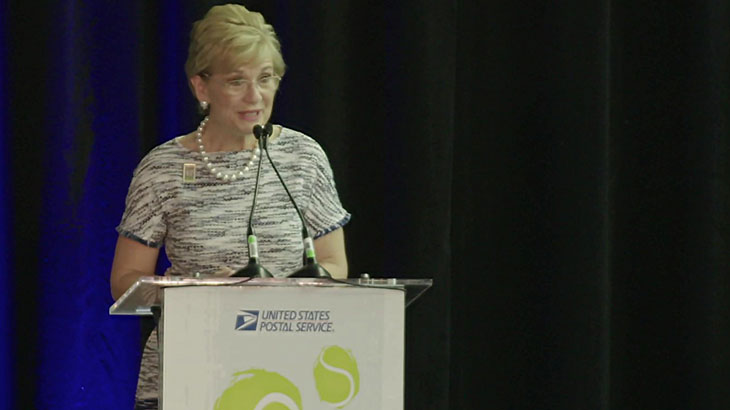 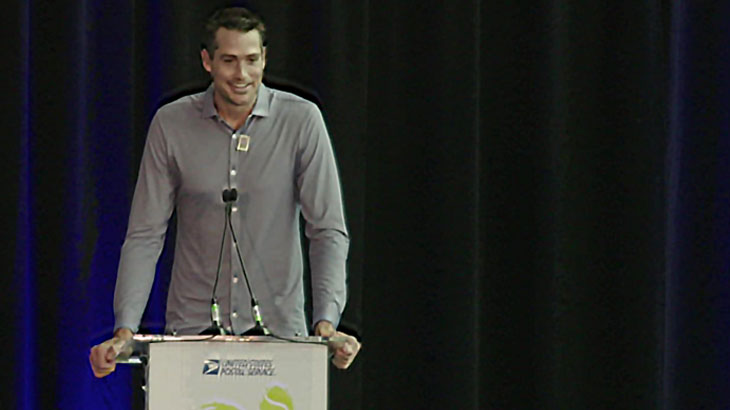 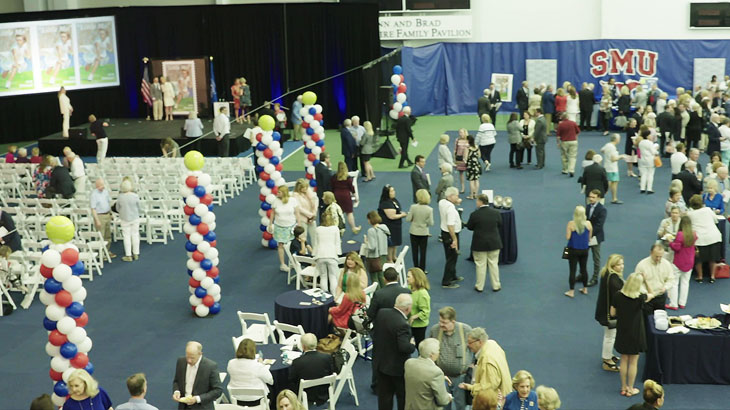 An enthusiastic crowd welcomed the latest U.S. sports-themed postage stamp onto the scene during a first-day ceremony for the Little Mo forever stamp April 23 on the indoor tennis courts at the Southern Methodist University Tennis Center in Dallas, Texas.

The stamp honors tennis champion Maureen Connolly Brinker (1934-1969), who was known as “Little Mo” during her dominance in the sport in the early 1950s. Connolly Brinker, an alumnus of SMU, was lauded as a pioneer in both women’s sports and tennis at the well-attended ceremony.

“She is a phenom,” said Janice Walker, vice president, U.S. Postal Service Corporate Communications, the dedicating official for the stamp. “She changed the history of tennis by breaking barriers and being the first woman, and the first American, to win the grand slam (of tennis)."

Cindy Brinker Simmons, Little Mo’s daughter, said prior to the ceremony that the family was thrilled for the honor, which took four years from concept to issuance.

“This is really special,” Simmons said, president of the Maureen Connolly Brinker Tennis Foundation, said in a USPS interview that was recorded prior to the ceremony.

“Totally out of the blue the United States Postal Service called us and said … that  mom was going to be honored as a pioneer in women’s sports and as a champion in tennis,” Simmons said. “So this glorious surprise ended up being a four-year journey – a wonderful journey – with our new friends at the Postal Service. This stamp will be propelling her memory and legacy into the hearts and minds of those who buy the stamp.”

In 1953, Little Mo – who was a teenager and an amateur – won the Australian Open, the French Open, Wimbledon and the U.S. Championships. Along the way, she dropped only a single set. Since then, no American singles player has won all four majors in a calendar year. Only two men and three women in total have achieved that feat.

From 1951 to 1954, Connolly – known for powerful groundstrokes – amassed nine major singles titles and three major doubles titles. For three years in a row, she was the top-ranked player in the world, and the Associated Press named her its “Woman Athlete of the Year” three straight years (1951-1953). She was inducted into the International Tennis Hall of Fame in 1969 and the International Women's Sports Hall of Fame in 1987.

Tennis pro John Isner, currently the highest ranked American male at No. 10 in the world, helped dedicate the stamp. (Sloane Stephens is currently the top American woman at No. 8.)

“This is a very momentous occasion,” Isner said as he gestured to the large blow-up of the stamp. “Just look at that – that is absolutely spectacular.”

The stamp features an oil-on-linen painting of the tennis star by Gregory Manchess. Based on a black-and-white photograph taken in 1952, the portrait is a colorful interpretation of the 5-foot-4-inch Connolly hitting a low volley while holding a second ball in her left hand. Her nickname – “Little Mo,” which was coined by a sportswriter in her native city of San Diego, California – runs across the top of the stamp, designed by art director Derry Noyes.

“This is truly historic,” Isner said. “I can attest how hard it is to win tournaments, let alone a grand slam, because I have not won a single one and Little Mo won nine of them, including four in one year. That is a remarkable achievement. I think one of the main reasons the women’s game is so healthy today is because of her and her legacy.”

In 1954, two weeks after she won her third-straight Wimbledon title, Connolly Brinker was horseback riding in San Diego. A passing concrete mixer truck frightened her horse, which pinned the tennis champion between the horse and truck. She was thrown off and suffered a compound fracture to her right fibula, which ultimately ended her tennis career. She was 19 years old.

In 1955, Connolly married Norman Brinker, who was part of the U.S. equestrian team at the 1952 Summer Olympics.

Connolly Brinker coached tennis and wrote articles about the game she once dominated and was committed to introducing young people to tennis. In 1968, she co-founded the Maureen Connolly Brinker Tennis Foundation. Over the past 50 years, MCB has pioneered junior tennis development throughout the United States and worldwide.

In 1966, Connolly Brinker was diagnosed with ovarian cancer. She died at age 34 on June 21, 1969, three weeks after a third surgery for a stomach tumor. She is interred in the Sparkman-Hillcrest Memorial Park Cemetery in Dallas.

“Being selected for this honor means you have made an extraordinary and enduring contribution to American society, history, culture or environment,” Walker said, who added that Connelly Brinker’s tennis achievements “combined with the gracious spirit she exhibited after her career abruptly ended is emblematic of the type of character and courage we strive to spotlight on stamps.”