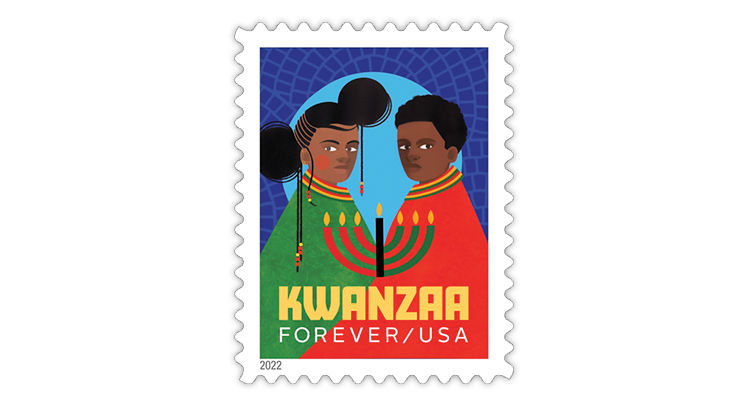 African-American community and unity will be on vibrant display when the United States Postal Service issues its 2022 Kwanzaa stamp.

The first-day ceremony for the nondenominated (60¢) Kwanzaa forever special stamp will take place Thursday, Oct. 13, at 11 a.m. Central Daylight Time at the Ferrara Theater inside the America’s Center convention complex at 701 Convention Plaza in St. Louis.

The Kwanzaa first-day ceremony is free and open to the public. A registration form is available online. Each attendee may invite up to four additional people, the USPS said.

The stamp is being issued two years to the day after the 2020 Kwanzaa stamp (Scott 5531) featuring artwork by Andrea Pippins.

Technical details published in the Sept. 8 issue of the Postal Bulletin indicate that the Postal Service ordered a print run of 12 million new Kwanzaa stamps in 600,000 panes of 20. The panes were processed from press sheets of six panes each.

A plate number consisting of a “B” followed by four single digits appears in the four corners of the pane, which does not feature a decorative selvage header.

The letter prefix is shorthand for the printer, and each digit represents one of the four process colors used to print the stamp: cyan, magenta, yellow and black.

“With this new stamp design, the U.S. Postal Service continues its tradition of celebrating Kwanzaa,” the USPS said in a Sept. 13 press release.

“The annual Pan-African holiday, which takes place over seven days from Dec. 26 to Jan. 1, brings family, community, and culture together for many African Americans.”

According to the Postal Service, artist Erin Robinson’s portrait “depicts two children — a girl and a boy — standing together with a kinara (candleholder) and the seven lit candles (mishumaa saba) in front of them.”

The children are wearing robes similar to spiritual garments. The light blue circle behind their heads signifies wholeness and unifies the figures, according to the Postal Service.

Robinson told Linn’s Stamp News that she was familiar with the Postal Service’s previous Kwanzaa stamps but wasn’t overtly influenced by them.

“I tried not to get influenced by previous [Kwanzaa] stamps,” Robinson said.

“I did see them but really tried hard to stay in my own world of imagination. I had been spending considerable time …