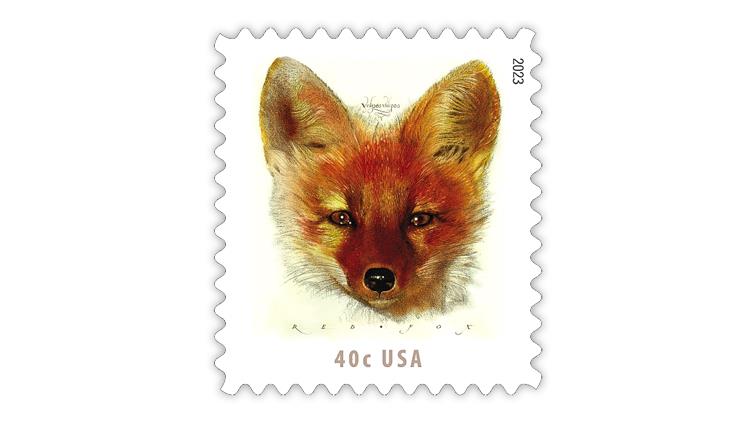 On Jan. 5 in Fox, Ark., the United States Postal Service will issue a 40¢ definitive stamp featuring a pencil-and-watercolor illustration of a red fox by acclaimed wildlife illustrator Dugald Stermer. 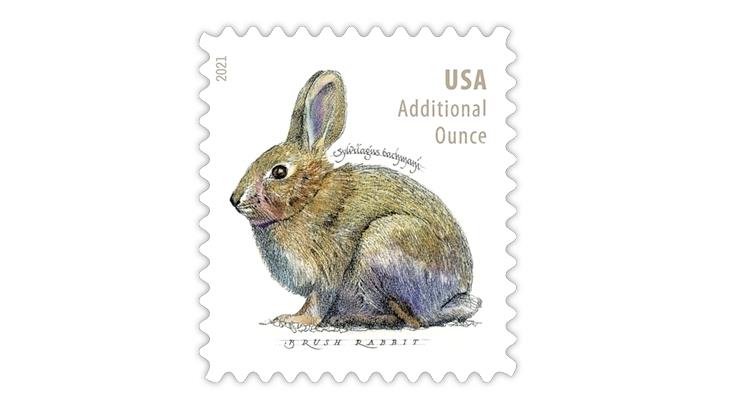 Stermer’s artwork also appears on the 2021 nondenominated (20¢) Brush Rabbit stamp that was issued in panes of 20 and rolls of 100 coil stamps. 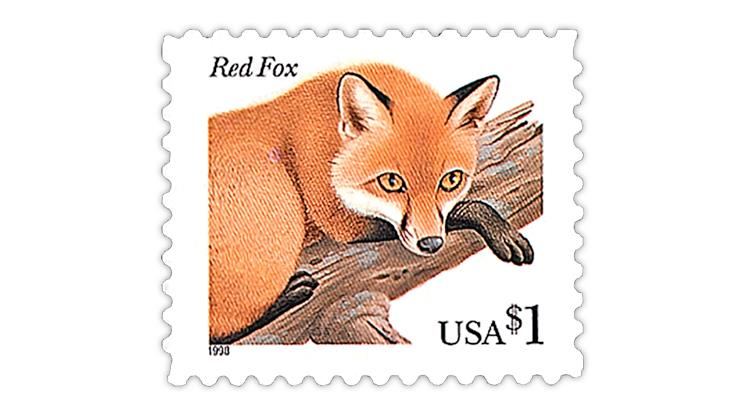 A red fox is shown on this $1 stamp issued in 1998. A similar $1 Red Fox stamp with a slightly different perforation gauge was issued in 2002.
Previous
Next

In an apparent case of philatelic matchmaking, the United States Postal Service will issue a 40¢ definitive (regular-issue) stamp picturing a red fox on Jan. 5 in Fox, Ark.

An official first-day ceremony is not being held for the new stamp, according to the Postal Service.

“The stamp art features a pencil-and-watercolor illustration of the face of a red fox from preexisting artwork by wildlife illustrator Dugald Stermer,” the Postal Service said.

The common name “RED FOX” is printed in widely spaced letters beneath the animal, and its scientific name “Vulpes vulpes” appears in very small letters between the fox’s ears.

The stamp’s denomination and “USA” are printed at the bottom, and a “2023” year date appears in the top right corner. All design elements are set on a white background.

Stermer (1936-2011) was an acclaimed illustrator in San Francisco and former art director of the political magazine Ramparts. As a freelance artist, he later created illustrations for numerous publications and also designed the medals for the 1984 Summer Olympic Games in Los Angeles.

“He rendered his subjects in such rich color and intricate detail, they appeared nearly alive,” Stephanie Lee wrote in a remembrance of Stermer in the San Francisco Gate after the artist’s death in 2011.

Strips of 500 from both rolls will also be available for purchase. Plate number strips of 25 will not be sold because the 40¢ Red Fox stamp is not a regular first-class stamp, the USPS said.

The stamp is “intended for use by bulk mailers for items such as circulars, newsletters, and catalogs,” the USPS said.

“It can also be used by customers who enjoy placing a variety of stamps on their envelopes and packages.”

In his Washington Postal Scene column in the Nov. 14 issue of Linn’s, Bill McAllister explained that the Red Fox stamp “is the product of a lobbying campaign by bulk mailers who convinced postal executives that the new stamp could boost first-class mail volume.”

“Mailers say they get higher returns from mail that has stamps than with envelopes bearing a printed stamp indicium or postage meter, and they are expecting the same results from envelopes bearing the 40¢ Red Fox in combination with other stamps,” McAllister said.

A red fox has appeared on a few other U.S. stamps.

In 1998, the Postal Service issued a $1 stamp (Scott 3036) depicting a closely cropped image of a red fox resting on a tree limb. The illustration is based on …